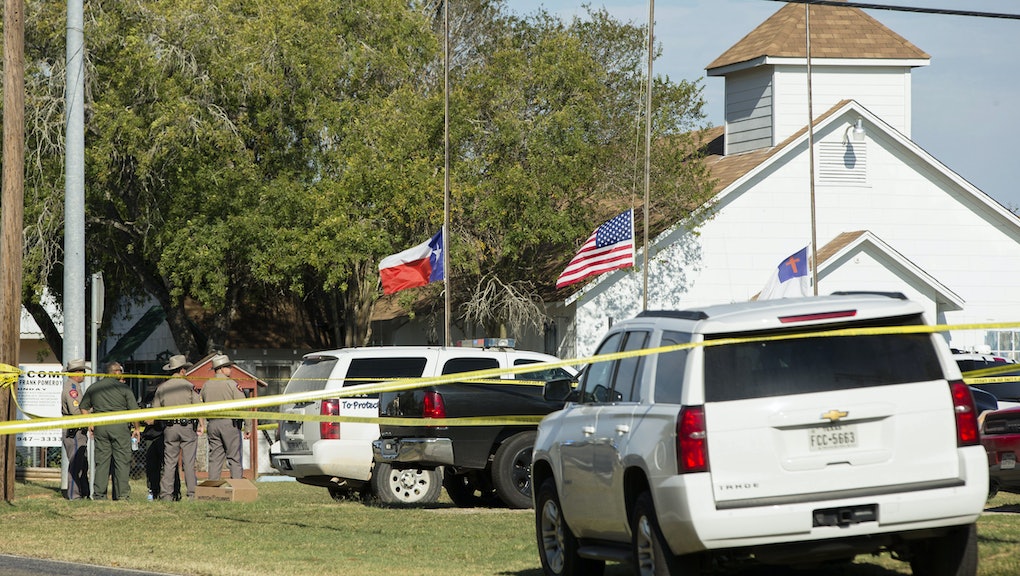 In the wake of Sunday’s tragic shooting at First Baptist Church in Sutherland Springs, Texas, news has emerged about alleged shooter Devin Patrick Kelley that feels all too familiar: He had a history of domestic violence.

The 26-year-old Kelley was court-martialed and convicted while in the Air Force for assaulting his wife and child, after which he was sentenced to a year in jail and a “bad conduct” discharge from the military, the San Antonio Current reported. According to the BBC, Kelley reportedly argued with and sent threatening text messages to his mother-in-law, who attended First Baptist Church but was not present Sunday, just before the shooting.

Kelley’s patterns of domestic abuse are commonplace when it comes to mass shootings. Many recent mass killings have been committed by men with histories of domestic violence or abuse: Las Vegas shooter Stephen Paddock allegedly verbally abused his girlfriend; the wife of Pulse nightclub shooter Omar Mateen said her husband beat her; James Hodgkinson, the perpetrator of the congressional baseball shooting in Alexandria, Virginia, was previously accused of punching a woman in the face and “throwing” his daughter around a room; Virginia Tech shooter Seung-Hui Cho was accused of harassing women less than two years before shooting and killing 32 people — and the list goes on.

According to Everytown Center for Gun Safety, 16% of attackers in mass shootings from 2009 to 2015 were previously charged with domestic violence.

Acts of domestic violence are at the root of a majority of mass shootings: Everytown reported that at least 54% of mass shootings involve the perpetrator shooting “a current or former intimate partner or family member.” Though women make up only 15% of overall deaths from gun violence, according to the Huffington Post, they’re more likely to be killed in mass shootings — 64% of mass shooting victims are women and children, while their attackers are male more than 98% of the time.

While some lawmakers are quick to point to links to Islam or mental illness to explain mass shooters’ actions, the overwhelming correlation between domestic violence and mass killings goes largely ignored.

“We already know that there is a very close homicide connection between domestic violence and access to guns, and then you add in the connection between mass murders, and I can’t understand why lawmakers and law enforcement aren’t taking this more seriously,” Kim Gandy, president and CEO of the National Network to End Domestic Violence, said in an interview with Mic.

The psychology behind escalating domestic violence into mass murder

At the root of domestic abusers’ actions, experts agree, is a desire to exert power and control over their victims.

“Domestic abuse is a pattern of power and control, and it can be exercised in all kinds of ways,” Gandy said. “A person can maintain power and control over someone through emotional abuse, psychological abuse, threats, economic abuse or physical violence. It doesn’t always take physical violence; it could just be enough to take that gun out of your drawer and clean it in their presence whenever they burn the toast.”

Ruth Glenn, executive director of the National Coalition Against Domestic Violence, agreed this power dynamic is the “basis of domestic violence” and said the perpetrator’s sense of losing that control is when mass violence can occur.

“The dynamics that contribute to the mass murder are, in our opinion, in regards to the power and control dynamic, which is the basis of domestic violence,” Glenn said in an interview with Mic. “What we often find is that this perpetrator, this murderer, has lost control in some kind of way, over, you know, his spouse or his partner or some other type of family dynamics or intimate partner dynamics. And once they lose control over that, then their strategy, their desire to maintain control, often results in something of this nature.”

The psychology of mass killers, too, points to using violence as a way to exert power and control. Clark McCauley, a professor at Bryn Mawr College specializing in the psychology of mass violence and terrorism, told the New York Times in June 2016 that a “sense of grievance” is common among mass killers — “a belief that someone, somewhere, had wronged them in a way that merited a violent response.”

“The dynamics that contribute to the mass murder are, in our opinion, in regards to the power and control dynamic, which is the basis of domestic violence.” — Ruth Glenn

“We are still rooted in a patriarchal culture [that] doesn’t see women and children sometimes as anything other than marginalized citizens,” she said. “And when we approach the community in that way, it really does allow for an unhealthiness and a culture of violence against that same marginalized community.”

While patriarchal gender views are in no way limited to Islamic terrorists, the New York Times noted that ISIS’ culture of oppressive gender roles, including the group’s “vast infrastructure of rape and slavery,” may have helped to attract men seeking control over women to the terrorist organization.

Strengthening the connection between mass shooters and domestic abusers is the fact mass shooters often exhibit warning signs — such as histories of domestic violence. In 42% of mass shootings, Everytown noted, the shooter displayed at least one “red flag” prior to the shooting, including “recent acts, attempted acts or threats of violence towards oneself or others; a violation of a protective order; or evidence of ongoing substance abuse.”

“One of the things about mass violence and mass shootings is that they almost never occur spontaneously with no prior indication,” Spitzer told NPR.

But while such behavior can point to a person “having problems of one kind or another,” Spitzer said, previous violent actions — such as domestic violence — can also provide a “psychological training ground” for a larger attack, according to the New York Times.

“Having a history of violence might help neutralize the natural barriers to committing violence,” Paul Gill, a senior lecturer at University College London researching the behavior of lone-actor terrorists, told the Times.

How can we stop this?

If the ongoing perpetuation of domestic violence helps fuel mass shootings and other attacks, what can actually be done to stop it?

One major step would be restricting access to guns for domestic abusers, Glenn and Gandy agree.

“We already know that domestic violence has a significant connection to mass homicide where firearms are involved,” Gandy said. “And unless we as a country take this seriously and put genuine resources into making sure that domestic abusers don’t have guns, we are going to continue to see this happen.”

There has been some progress made in this area: Abusers convicted of domestic violence misdemeanors are legally prohibited from owning firearms under the 1996 Lautenberg Amendment, and other gun control measures are proven to reduce rates of domestic violence. The National Domestic Violence Hotline, for example, reported that 38% fewer women are shot to death by intimate partners in states that require background checks for handgun sales.

But there are some dangerous loopholes that still make it possible for domestic abusers to purchase guns, as evidenced by the fact Kelley, whose domestic violence charges should have prevented him from having a firearm, was still able to purchase the assault rifle he used Sunday.

The Lautenberg amendment, according to Slate, only applies to “co-parents and legally married spouses,” meaning there are no protections against men who abuse their unmarried partners — even though a majority of abuse “is committed by dating partners rather than spouses,” according to the NCADV. In many states, abusers can circumvent the law by purchasing firearms at gun shows or on the internet to avoid the background check.

When an abuser already owns firearms, there’s often little to be done. Slate noted that domestic abusers in 41 states can keep their existing firearms; an Everytown investigation in Rhode Island revealed that out of 1,609 domestic violence protective orders granted from 2012 to 2014, judges required the abuser to relinquish their firearms in just 5% of cases.

While it’s necessary to address the laws behind those loopholes, Gandy said it’s often law enforcement that allows those guns to stay in the abuser’s possession.

“Unfortunately, there’s a real reluctance on the part of some law enforcement to remove guns. They’ll say, ‘Do you have any guns?’, and when the person says no, they’ll say ‘OK,’” Gandy said. “They say, ‘We can’t remove the guns because we don’t have a safe, temperature-controlled space to store them.’ Really? You’re not going to remove the guns because you’re worried about scratching them?

“But that’s a serious and genuine response that victims get from judges and law enforcement ... and there are other reasons like that,” Gandy added. “Law enforcement doesn’t want to go out there and physically remove the guns, and if you don’t, then you’ve got an abuser with a gun, and that’s a really dangerous situation for the family members and for the public at large.”

While limiting access to guns is crucial, curbing domestic violence and the mass violence it can lead to also demands society take domestic crimes seriously.

“There’s a history of domestic abuse not being taken seriously,” Gandy said. “Things have improved significantly since I started working in the field 40 years ago, but back then people referred to domestic abuse as a family matter, something that should be kept within the family, and it wasn’t talked much about publicly at all. And things have improved, but I think there’s still a sense by some in society that this is a private family matter, and it’s just not taken as seriously.”

Glenn, too, said part of treating domestic abuse is “addressing a [patriarchal] culture that allows it,” adding, “I think ending domestic violence is a hard charge, but I think our culture can do it if we take a stand and get educated, raise awareness and put in some practical steps and practical actions to make a difference.”

Preventing domestic violence is “simply an area that the country has not prioritized,” Gandy said. “There’s just a tremendous lack of funding for the whole area, for prevention and intervention.”

Glenn, too, agreed prevention is key — but society has to do more to address it.

“I truly believe that we have a society that has not addressed domestic violence in a way that can prevent this,” Glenn said. “With the key word being prevention and really addressing what the root causes are, whether that be studies, whether that be laws or whether that be just best practices across the country that help us understand and prevent this from happening.”