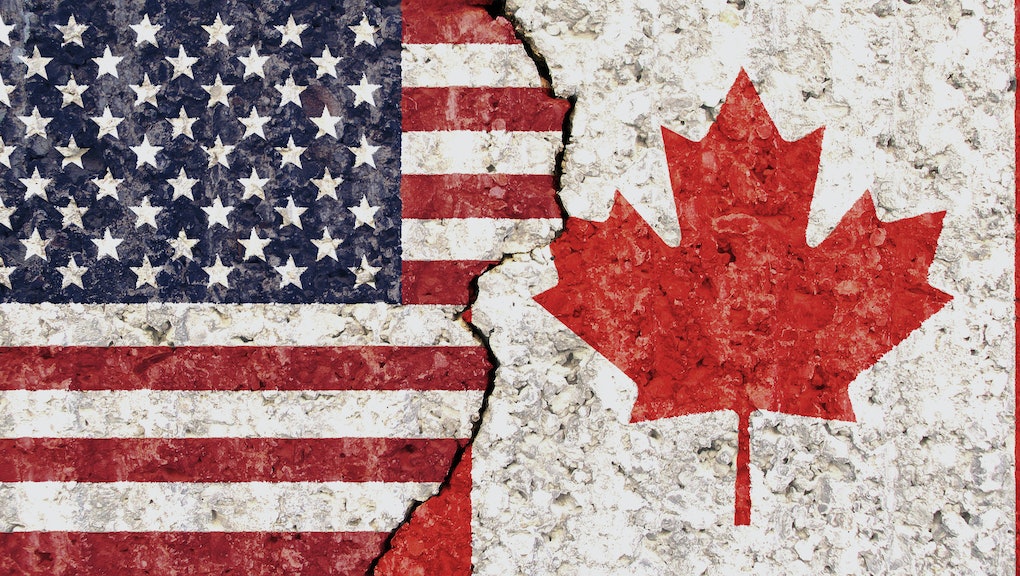 We all swore we’d move to Canada if Trump won. These people actually did.

Oh, Canada. Home to a police department that hands out “positive tickets” for good behavior, not a single weapon of mass destruction and... Justin Trudeau. For some Americans, the Great White North symbolizes greener grass, an attractive, theoretical escape for those in search of more affordable health care, a lower cost of living or a prescription for quelling feelings of despair post-election.

Historically, when election season comes, Canada appears particularly Eden-like for some people in the United States. “Every election, there’s that chorus of people who insist they are moving to Canada if candidate so-and-so wins,” political reporter Danielle Kurtzleben wrote for NPR. In 2016, the threat to get the hell out felt more sincere than years prior; Snoop Dogg and Barbra Streisand, for example, were among the legion that said they’d leave if Trump were elected. And yet, few people followed through. According to statistics released by Canada’s immigration office, there was just a minuscule increase in applications for Canadian citizenship post-election. And Snoop and Streisand are still living stateside.

But politics did lead some Americans to rethink their allegiance and commit to a different life. Cori Carl, the 33-year-old managing director of The Caregiver Space, moved to Toronto in the months leading up to Trump’s election. “I was definitely motivated by politics — even living in the magical, liberal bubble that is New York City,” she said in an interview. “As the end of the Obama administration neared and as the campaign was just starting for the next presidential election, the backlash of Obama was palpable. I was really nervous about how that was going to go.”

The Brooklynite first visited Toronto on a whim; after spending the weekend exploring, she “really fell in love with the city.”

“At the end of the weekend I was going back to the airport and I really didn’t want to go home,” she said. “And that was the first time I ever felt that.”

Even so, when she did decide to make the permanent move, Carl said she felt like she was being paranoid. “I knew there were biased crimes in New York against queer people and certainly there’s plenty of gender discrimination, but living in New York I didn’t feel like I was discriminated against on a daily basis. Maybe I had issues with catcalling, but I felt safe,” Carl, who is queer, said. “It was only moving to Toronto that I’m realizing how much discrimination and bias there was in New York.”

Life in Toronto means more affordable housing options, smooth city navigation and a hard-to-quantify sense of ease for Carl. “I feel like now that I’m in Toronto I’m living the life I always hoped I would live in New York,” she said. “Obviously Canada isn’t this sort of utopia where racism and sexism don’t exist,” but the daily stress she subconsciously felt in New York doesn’t fester in the same way. “In New York, there’s thousands of tiny little incidents every day of people bumping into you or just being vaguely rude. That’s just not something that happens in Toronto,” she said. “I feel like it never reaches that threshold where it starts to make me twitchy or unhappy.”

“It was only moving to Toronto that I’m realizing how much discrimination and bias there was in New York.”

Carl was part of the first batch of applicants for Canada’s Express Entry program that launched in 2015. The government-run process is based on points system that favors younger, skilled immigrants; Carl said it takes at least six months to get approval, but it can take up to a year before applicants can re-enter the selection pool if they haven’t been chosen. Seemingly minor oversights on the application’s end — like not being able to properly register freelance work — made the application process a tedious one, and Carl spent countless hours working on it. Through the experience, she became an expert on moving to Canada, leading her to launch a website that coaches others through the process.

“I spent so many hours figuring out this information — I thought I’d at least save some other people some time,” she said. By the time she finished writing, she realized her information could serve others in the form of a book, so she self-published one on Amazon. “It’s sort of a silver lining to a really terrible situation,” she said of her guidebook. “I’d rather have it be less popular.” She said traffic on her website and book purchases spiked considerably on both Election Day and Inauguration Day, though she hasn’t done any marketing for either.

Linda, who requested her last name be withheld for privacy, didn’t need a guidebook for getting into Canada. Since she was born in Montreal, it was easy enough for the 69-year-old to move to Nova Scotia with her American-born husband in July 2017. Despite her roots, it was Linda’s husband who became obsessed with leaving their Colorado home of 40 years to move across the border in the wake of Trump’s election. “I lived in the states for 50 years, so it was a strange decision. But once we finally made the decision and got going on it, you could hardly hold us back,” Linda said.

The couple landed on the tiny town of Clementsport (“I don’t even think we have a population”) because they wanted an affordable home near the water with a decent-sized property. “I wanted to retire and I couldn’t afford to do that in the United States because of Medicare,” Linda said. “We still had a mortgage on our house [in Colorado] because we had refinanced so many times, and I would have had to work another five to six years, and even then it would have been tough to afford the Medicare.” She said having access to her social security funds but not having to pay for healthcare makes a big difference.

Trump’s election wasn’t the initial motivation for crossing the border — it was Linda’s desire to retire in a place that wasn’t Colorado, which she said was becoming more expensive and crowded since “the marijuana initiative.” But ultimately, the election results were “the icing on the cake,” she said. “I didn’t even become a citizen until [2016] — and that was only so I could vote, and so Trump couldn’t take my social security away from me in case he decided to do that. I just was afraid.”

“It’s a dream come true” to be living in Clemensport, though “there are certain things that we are missing,” she said. Linda, who was a vegetarian for more than a decade, has started eating fish again because sustaining her diet in an affordable way has been too difficult. The couple’s favorite dairy-free ice cream is twice as expensive as it was back in the Denver area, so it’s become more of a rarity. And the nearest Costco is two hours away in Halifax. “It’s just a matter of getting accustomed to, though,” Linda said, describing how incredible it is to live near the Bay of Fundy, a body of water known for having the highest tides in the world. “We’ll sit here looking out in the evenings — we’ll take a glass of wine just watch the sunset and just watch the tide coming in,” she said. “We just watch and we just keep saying, ‘We’re so happy.’ We love it.”

Without her Canadian citizenship, Linda said it would have been incredibly difficult to make the move. For one 33-year-old software engineer and father of two, the immigration process has been just as Linda described. An American-born citizen, he works remotely as an independent contractor for a software company that’s headquartered in Victoria, the capital of British Columbia. He and his family are currently living about three hours south of Indianapolis, but they have had plans to move to Victoria since before Trump’s presidency was official.

The software engineer has been working with lawyers hired by his company to make the move since July 2016, with intentions to leave the country in June 2017, after his kids finished the school year. “I think a lot of what led to Trump being a viable candidate to begin with already existed,” he said in an interview. “Seeing it kind of manifest itself, you start to think that it’s not the place you believed in growing up.” He cited “hatred coming from all directions” and the fact that most Americans have lived in a state of war for the majority of their lives as some of the reasons he’s looking to get out: “You start to think maybe we’re not the beacon of democracy and everything else we think we are.”

Healthcare is another motivator. As an independent contractor, he doesn’t have insurance through his employer: “Last year, because of insurance premiums and out-of-pocket costs, I spent about $25,000 in healthcare.”

The engineer’s lawyers implied that getting Express Entry would be quick and painless, but by the time he checked in on the status of his application in February 2017, “it turned out we were at step zero.” Even then, he was assured the process wouldn’t be long; in May, the family sold their home, expecting to be in Victoria in a matter of months. “We’ve been sitting in an apartment waiting to get up there — we just haven’t been cleared yet,” he said.

The engineer and his family remain in the pool of applicants seeking Express Entry, but he’s also working with his company to apply for a visa. “At this point we’re getting kind of frustrated at waiting,” he said. “We do still want to move out of Indiana either way.” He was more politically active in the 2016 election season than he’d ever been before, advocating for voter turnout, even after his first pick, Bernie Sanders, was out of the running. He ultimately voted for Clinton.

Canada means a break from a lot of the mental torment the U.S. political climate has incited for the engineer. “I’m kind of hoping to allow myself to be less political in a way. Not because I don’t want to be involved in the process, but because it’s just not good for my stress level,” he said. “Every time I read about another shooting, I cry. It breaks me for days. I get really worked up about it. Reading the news every day, it keeps me up at night. It’s too much.”