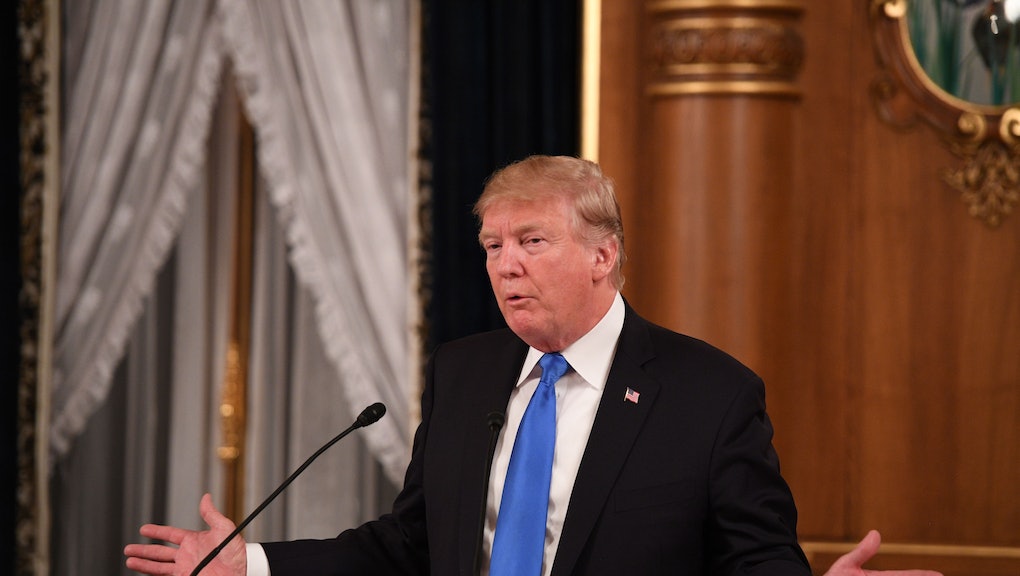 Has Donald Trump fulfilled his 5 big economic promises? How they have held up one year post-election

United States President Donald Trump was elected one year ago — at least in part because of his economic promises — in a stunning upset to expected winner Hillary Clinton. In the immediate wake of Trump’s win, stock markets started to plunge: until investors woke up and seemingly saw things in a new light. Trump promised to cut taxes, after all, an expected boon to corporations.

In his victory speech, Trump said, “We have a great economic plan,” promising, “we will double our growth and have the strongest economy anywhere in the world.” Since then stocks have continued to soar, if unevenly. Perhaps predictably, as geopolitical tensions have increased, industries like aerospace and defense have fared best, while market sectors like retail continue to struggle — and shed jobs.

Of course, the stock market is often wrongly used as a surrogate for how the economy is doing — and only about half of Americans (54%) own any stock at all, according to Gallup. And even as the market keeps hitting new highs, U.S. workers face frustratingly stagnant wages; meanwhile, Trump’s economic agenda — which has been controversial since the start — creates a more complicated picture.

So how is the Trump economy really doing, 12 months since the election?

There’s a lot to consider, given the many promises Trump and his administration have made over the year — from cutting taxes on the middle class (but not on the rich) to slashing regulation to bringing back jobs to repealing Obamacare to growing GDP by an ambitious 4% annually.

Here is how well Trump is delivering on five of his key economic promises.

President Trump was unambiguous that jobs would be the central focus of his presidency, saying in a press conference before he took office that “I will be the greatest jobs producer that God ever created.” In a September 2017 address before the United Nations, Trump took the opportunity to tout his economic record in similar terms.

“Unemployment is at its lowest level in 16 years,” he said at the U.N. “Companies are moving back, creating job growth the likes of which our country has not seen in a very long time.”

Does the whole claim hold up? Not really.

True, unemployment is low and the most recent jobs report was Trump’s best: The economy created about 261,000 jobs in October, according to the Bureau of Labor Statistics; but the economy has been adding about 170,000 jobs each month on average.

That’s not bad, but as Politifact noted, it’s very similar — if not worse — than the job growth under former President Barack Obama. And it is not high enough yet to meet Trump’s pledge to create 25 million jobs over a decade, aka more than 200,000 jobs per month.

To be fair, the president has less effect on employment than you’d think. The Federal Reserve, for example, acts independently and is in charge of maximizing employment, in part by setting the cost of borrowing. The economy Trump inherited was also close to perfect employment, according to some economists. There was arguably not much room for job growth to go up.

Still, Trump hasn’t even had a full year in office yet, and many of his more ambitious economic initiatives, like a plan to overhaul the tax system, have not yet come to fruition.

One of Trump’s biggest campaign promises was an overhaul to the tax code: Many tax cut advocates argue that falling unemployment hasn’t led to higher wages for workers because taxes are too high.

Setting aside the fact that the U.S. is not actually the highest taxed country in the world, as Trump sometimes claims — depending on which metric you use it tends to fall in the high teens or low thirties — for a multitude of reasons, Trump’s tax report card is still a solid incomplete.

Pretty much from the moment of Trump’s election, expectations began to mount that conditions were ripe for a new tax reform bill with the help of a Republican-controlled Congress. Yet the current bill released by the House likely faces serious hurdles and slim chances of passage in the short term without changes.

It doesn’t help that news broke of former Trump campaign staffers getting indicted by special counsel Robert Mueller’s Russia probe the same week tax reform came out. But critics have also blasted the bill for its substance — particularly that it doles out most benefits to wealthier people.

Under the proposed bill, 22% of households would likely see their tax bill go up by the year 2025, according to an analysis from the Joint Committee on Taxation. Because the tax bill phases out tax credits for working families over time — while phasing in benefits for the wealthy like the estate tax repeal — it’s been accused of being misleading and prioritizing the wrong cuts.

The bill would likely cause some economic growth, according to an analysis released on Tuesday by the bipartisan Penn Wharton Budget Model, but most of these economic gains would disappear and potentially even reverse, relative to current law, by 2040.

It’s not very popular either, with half of Americans disapproving of the proposed law, according to a recent poll.

Repealing the Affordable Care Act was another central economic promise of the Trump campaign — one Trump himself has made over and over.

“One of my first acts as president will be to repeal and replace disastrous Obamacare,” Trump said during an economic address at the Detroit Economic Club, promising that this alone would save “another 2 million American jobs.”

Trump’s jobs claim was a little misleading to begin with. As explained in Money, the “2 million jobs” claim really refers to a slight pullback in labor participation from people who scale back their hours in order to qualify for better subsidies. Over 10 years, these hours would likely have added up to the equivalent of 2 million jobs.

Even more importantly, Trump promised ahead of inauguration that his health plan replacement would provide “insurance for everybody” — yet a final version of a repeal bill he endorsed would have increased premiums and caused some 16 million people to become uninsured.

Regardless of whether you view the Affordable Care Act as a job-killer or not, it’s still the law of the land. Attempts to repeal it have stalled including, most recently, an attempt to undo aspects of the law through a new version of the also-troubled tax reform bill.

Unfortunately, premiums are set to rise for health plans for 2018 — at least in part because of uncertainty around cost-reducing subsidies Trump has threatened to withhold from insurers.

One of Trump’s first acts was to sign an executive order saying that two regulations must be scrapped for any new one to become law.

The regulatory burden is a particularly strong point of concern for the business community, especially smaller businesses who have fewer resources to devote to compliance and gaming the system. Trump wasn’t super specific about which regulations would be on the chopping block, but seemed to hint that they would center on environmental controls.

Now, many regulations are crucially important to protect consumer rights — not to mention health and lives. That said, the president has, in fact, successfully fulfilled some of his promises on this front, withdrawing a total of some 469 regulations as of Oct. 12, according to a review from the Washington Post.

That is far more than former presidents Barack Obama and George W. Bush withdrew in the very early days of their Presidency, though calculating a president’s regulatory impact is incredibly complicated — getting rid of a rule usually requires creating a new one to get rid of it.

Some of the regulations Trump withdrew also never had a chance to come into effect, making it harder to quantify the repeal’s impact. One example is the repeal of the Labor Department’s “fiduciary rule,” which would have required financial advisers to give customers advice in their best interest as opposed to pushing products based on the size of their commission. Other rules on the chopping block, like the “clean power plan,” will have to be repealed through the rule-making process, which can take years.

Finally, a lot of regulations exist for good reason, so much so that even the business community would like to see them stay. Legitimate pharmaceutical companies, for example, don’t necessarily win out when their rivals can undercut them by selling snake oil. And many companies — even Exxon — back some degree of environmental regulation to combat climate change.

One of Trump’s most controversial campaign promises is best described as his promise to put “America first” in terms of immigration and trade policies. This is embodied in promises to boost employment by restricting immigration, or re-negotiating trade pacts to strike a better deal on behalf of American workers.

More than any of his ideas, these proposals in particular drew the ire of economists over the last year; most tend to be a fan of policies like free trade and open borders, both of which make goods and services cheaper. Undocumented immigrants are also likely not the economic burden they’re made out to be — if anything they also stimulate the economy by subsidizing social security and paying state and local taxes.

That said, the business community is arguably more concerned about Trump’s promises to tear up trade agreements. 72% of investors in a recent Trade Leadership Coalition poll said they felt that withdrawing from the North American Free Trade Agreement, for example, would hurt the economy in the short term.

A majority of those polled, 54%, said they think Trump is only bluffing. Of course, on the immigration front, Trump and his administration have done anything but — restricting immigration for many, eroding protections for Deferred Action for Childhood Arrivals recipients, and instituting a travel ban, which has been repeatedly challenged in court.

How has Trump done overall?

In part because so much of his legislative agenda has stalled, it’s tricky to assess the economic impact of the Trump presidency this early. At the outset, predictions were dire — with many reputable economists, banks and ratings agencies predicting millions of lost jobs or more. So far, that doesn’t seem to have happened, and GDP growth year-to-year has been about 2.3%.

Of course, it can take time for effects to unfold, and there is a strong likelihood that, if enacted, many of Trump’s economic policies would at the least make society more unequal than it is. Already there are signs that wealth inequality is growing. If enacted, the Republican tax plan would raise taxes for close to half of the middle class, according to a New York Times analysis, while passing on huge gains to the idle rich.

How? In addition to repealing the estate tax and the alternative minimum tax, two taxes only paid by the wealthy, the bill also has a strangely structured tax cut on pass-through businesses like the Trump Organization.

Pass through businesses tend to be used to described mom-and-pop businesses, but the structure is also often adopted by large real estate operations and consultancies. The new GOP tax bill would lower the rate at which pass-throughs were taxed but, weirdly enough, far more if they don’t actually work for the company in question.

Indeed, it’s difficult to ignore how much the priorities of the tax reform bill seem to align with Trump’s own interests: After deductions, Trump’s federal tax bill was $5.3 million, a rate of just under 4% of his income. The alternative minimum tax increased that amount by $31 million.

As it happens, in October a Manhattan federal court began hearing arguments about whether Trump’s actions that would allow him to profit from his presidency — evidenced by his refusal to sell his assets or place them in a blind trust — violates the Constitution’s emoluments clause.