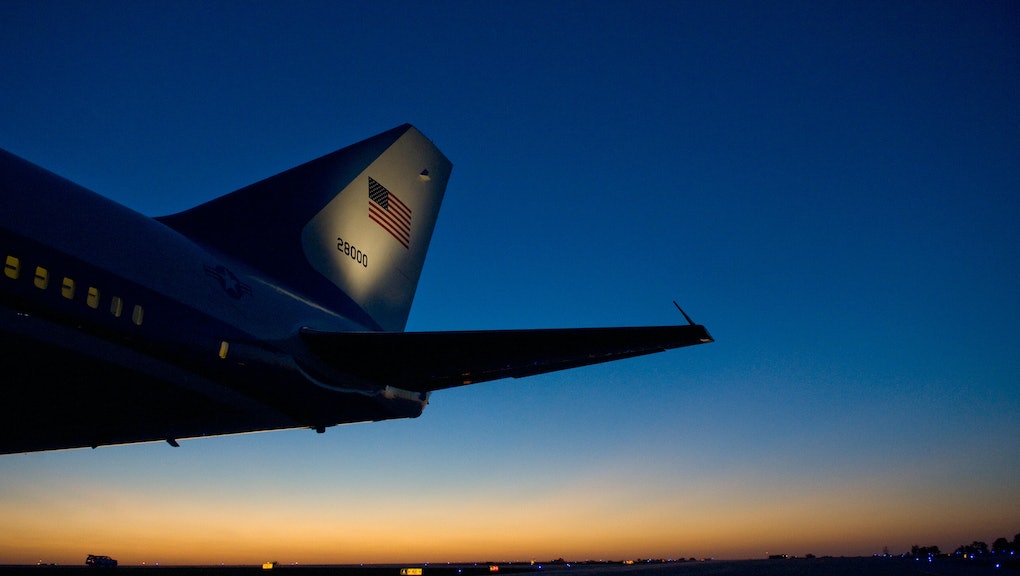 How travel has changed in the age of Trump

On Jan. 29, the Assalis, a family of Syrian refugees, crossed the border into Lebanon, flew to Doha and boarded a Qatar Airways flight to Philadelphia, where they planned to meet their relatives, U.S. citizens living in Allentown. Upon arrival, they were turned away at immigration and forced to board a flight back to Doha. While they’d been in the air, President Donald Trump’s travel ban had gone into effect with no warning, banning people from seven majority-Muslim countries, including Syria, from entrance to the U.S.

The travel ban, implemented a week after the inauguration, was the opening salvo of Trump’s “America First” strategy. The first of many travel-related policies, it was certainly one of the most dramatic as it went through multiple iterations. People were stranded at airports or in foreign countries, separated from their spouses, parents, pets, jobs, patients, students and research; green card holders were coerced into signing deportation papers; American Civil Liberties Union lawyers camped out in terminals; Homeland Security staff cold-shouldered congresspeople; and there were widespread protests.

There have been so many policy changes to travel since January. Here’s a look back at what has changed in 2017, and the way it’s impacted Americans traveling overseas and foreign visitors to the U.S.

The major policies that have impacted the way we travel

The travel ban has been under assault from almost the day it was launched. A federal judge issued an emergency injunction on Feb. 3, and the Assali family was admitted into the country a week later and reunited with their family in Allentown — Trump voters, in an odd twist.

The ban has been through three iterations. The second version (“watered down,” according to the president) debuted in March, excluded Iraq and was allowed to partially go into the effect by the Supreme Court in June. In September, the third version of the ban removed Sudan but added Chad, North Korea and several officials from the Venezuelan government. It’s blocked by litigation in federal court.

All this creates instability for the travel world, especially as it relates to conferences, a billion-dollar industry that plays a key part in generating income in local economies. “At the moment there’s a perception that the U.S. is a little less welcoming than it was in the past,” Arne Sorenson, CEO of Marriott International, told Bloomberg earlier in November. And the logistics matter: “You’re going to have people coming in from everywhere, and they’re going to be looking at ‘Can we get our people in? Are they going to want to go to that place?’” That problem doesn’t exist in Canada, where, anecdotally, Sorenson said international groups are meeting instead.

Many countries have issued new travel advisories against the U.S., according to the New York Times, including England, Ireland, Germany and New Zealand. Most of the warnings concern natural disasters like Hurricane Irma and the California wildfires, ongoing threats of terrorism and recent active shooter situations, rather than specific Trump policies. But in the case of the Bahamas, “The Ministry of Foreign Affairs and Immigration has taken note of the recent tensions in some American cities over shootings of young black males by police officers,” the Times reported. Trump’s rhetoric on the subject certainly hasn’t helped.

According to the National Travel and Tourism Office, every month from April 2016 to May 2017 except for one has seen a decrease in international visitors from the same month of the previous year. April 2017 is the only exception, which saw a 5.4% increase from April 2016. What’s more alarming is the broader trend: With very few exceptions, the U.S. has sustained increased international visitor traffic all the way back to 2010.

For travelers from the Middle East (and for Americans flying home from the region), March’s laptop ban affected passengers flying from 10 airports in eight countries, including the home bases for Emirates, Qatar Airways and Etihad Airways. There was speculation that the ban was a thinly veiled ploy to simultaneously limit travelers from the Middle East and to damage these three airlines, which domestic airlines have been warring with over unfair competition, as the government-supported airlines expand their American routes.

Emirates trimmed its U.S. flights shortly after the ban, telling Bloomberg: “The recent actions taken by the U.S. government relating to the issuance of entry visas, heightened security vetting and restrictions on electronic devices in aircraft cabins, have had a direct impact on consumer interest and demand for air travel into the U.S. Over the past three months, we have seen a significant deterioration in the booking profiles on all our U.S. routes, across all travel segments.”

To some analysts, the ban made no sense. The U.S. operates a preclearance facility in Abu Dhabi, Etihad’s hub, for one, which foils the government’s substandard security argument, and storing laptops in checked luggage is a known danger because lithium-ion batteries can start a fire in a cargo hold. But the threat that allegedly necessitated the laptop ban seemed to become more credible when British airlines followed the U.S. with its own ban less than a day later.

In May, news circulated about an expansion of the laptop ban to U.S.-bound flights originating in Europe. John Kelly, then head of the Department of Homeland Security and now Trump’s chief of staff, suggested the ban might be expanded for up to 71 countries, using the threat as leverage for expanded security at and increased shared information from those airports. The European ban never went into effect, and by July, DHS reported that all 280 airports flying to the U.S. were in compliance with new, expanded security measures. These expanded security measures took full effect in October, and include additional passenger interviews, personal electronics screenings and the complete lifting of the laptop ban.

But another electronics ban is afoot. The Federal Aviation Administration now wants to ban laptops in checked luggage — exactly where DHS forced travelers to store their laptops earlier. “The FAA’s advice is based on new safety tests showing that the rechargeable lithium-ion batteries found in laptops could bring down an aircraft if they overheat when packed next to flammable items in checked luggage,” reported Forbes, which has cheekily dubbed the new advisory the “laptop flip-flop.”

Changes to travel aren’t only happening in the air. Travelers visiting America’s natural wonders may pay higher entrance fees at national parks if a proposal currently under the review through Thanksgiving gets implemented. Parks affected include Yellowstone, Acadia and Joshua Tree, where the entrance fee would increase from $25 to $70, the largest increase since World War II, according to the Washington Post. The fees are for park maintenance, said Interior Secretary Ryan Zinke.

Meanwhile, the Trump administration, which has proven no ally of nature, has proposed slashing $400 million in funding to the parks in its 2018 budget.

Americans traveling abroad haven’t been directly impacted by the Trump administration’s travel-related policies, most of which have made it harder for people from other countries to get to the U.S., rather than harder to U.S. residents to get other countries. The effects for American citizens are mostly secondary: increased security, residual delays and general aggravation for travelers returning home to the U.S. from the Middle East during the laptop ban. But according to industry experts, Americans aren’t traveling less.

“In Mr. Trump’s first year, we have noticed the beginning of the year in a holding pattern as our clients waited through the first quarter to see how the first few months would go,” said Ashish Sanghrajka, president of Big Five Tours and Expeditions, in an email interview. The outfitter runs tours to more than 45 locations from Australia to Zanzibar. “Once they realized life goes on, our booking trends returned to normal with buyer patterns following broader economic indicators.”

Leigh Barnes, regional director for North America at Intrepid Travel, agreed: “U.S. bookings [are] growing at 30% this year. Although new policies from U.S. government may be impacting the travel atmosphere, the travelers we have been in contact with do not seem concerned and have continued to travel to all of the 100 countries we operate in,” Barnes said in an email interview.

The sample from which these opinions are formed is somewhat skewed, since Big Five’s and Intrepid’s customers are already Americans likely to travel. But data from the State Department does support this, at least the claim that Americans are still seeking to travel abroad. The 2017 fiscal year has seen the highest number of U.S. passports (including passport cards) issued ever. From 2007 to 2011, the number of new passports issued declined every year, but since 2011, the number has increased every year, with the largest percentage increase coming between 2015 and 2016. While the data follows the recession and the U.S.’s economic recovery, it also shows that more Americans have been seeking to travel overseas than ever before.

One notable situation where politics has impacted Americans traveling abroad is the Turkish visa issue. Terrorist activity and the perception, real or imagined, of danger has impacted travel in Turkey in recent years, but the suspension of visa services between the U.S. and Turkey — a diplomatic game of who started it — has been a far more definitive inhibitor.

There have been reports of Americans being admitted into Turkey, and travelers are permitted if they purchased an e-visa ahead of the ban, but the situation has largely shut down travel between the two countries. Passengers on Turkish Airlines flights connecting in Istanbul onto a final destination are exempt; they don’t need visas and can’t leave the airport. (U.S. reps for Turkish Airlines and Visit Turkey did not make anyone available for comment and referred Mic to the airline’s FAQ.)

Intrepid was seeing 25% growth in American passengers booking trips to Turkey before the current situation. “This decision to no longer issue visas is a massive step back for a country finally in the middle of a resurgence,” said Barnes. “The decision seems to be quite political, while the reality is that local hoteliers, restaurateurs and other small tourism business owners will likely be impacted the most.”

In March, while traveling in Santa Fe, New Mexico, I met a shopkeeper named Yavuz Çilingir at Magic Art Y&C, the boutique he had just opened and filled with lanterns, jewelry and rugs from Turkey. In Istanbul, he had four shops in the Grand Bazaar, but as Turkey bled tourists in the wake of bombings and coups, Çilingir was forced to close them and decided to start over in the U.S. He’d been to Santa Fe for art shows and thought it would be a good place to live.

Çilingir told me that he was planning on going back and forth to Istanbul to restock his shop in New Mexico. The current visa situation makes that impossible, and had he been abroad during the brouhaha, he would have been stuck. Turkey was never part of Trump’s original travel bans. Now the country, a key ally in the Middle East, in effect has its own ban.

There’s hope: On Monday, CNN reported the U.S. would begin processing visas for Turkish visitors on a “limited basis” and vice-versa, in an effort to slowly rebuild the travel relations between the countries.