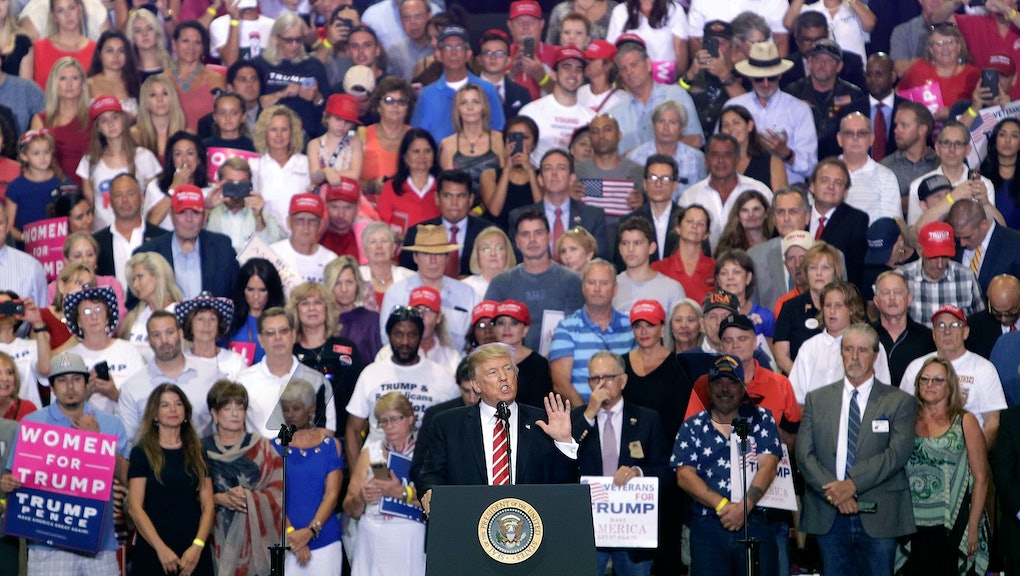 Peter Beinart probably means well. His latest for the Atlantic — “‘Republican’ is not a synonym for ‘racist’” — is fueled by a clear desire to see bipartisan reconciliation amid the most polarized political climate in recent memory. His impulse to find common ground between liberals and conservatives is understandable. And he seems to truly believe that the party of voter suppression, the Southern strategy, an almost 90% white support base and the Donald Trump presidency, is not fundamentally driven by white racism.

So in place of the name-calling that sullies much of today’s political discourse, Beinart suggests that liberals and conservatives reach a compromise.

“Conservatives need liberals to stop abusing their cultural power” that lets them label conservatives “bigots” and stigmatize them, Beinart writes. In exchange, conservatives need to be less “willfully naive” about the “impact” their policies have. “America needs a conservatism whose devotees feel less stigmatized and who earn that lack of stigma by trying harder to disentangle their support of small government and traditional morality from America’s history of bigotry.”

But “trying harder” is not enough when it comes to undermining the GOP’s racism — and in any case, it would be like trying to disentangle the blood cells from the bloodstream. What Beinart fails to reckon with in any meaningful way is the debt the modern Republican Party owes to bigotry for its very existence.

The elements of this debt are manifold, but two stand out: First, the modern GOP would have a shadow of its current support base if not for its active appeals to white racism — even as Beinart insists that many of these same Republicans fear being called bigots more than any other label. The second is that many of conservatism’s defining stances — its advocacy for states’ rights, its dogged support for the police, its war on alleged “voter fraud” — are only nonracist in theory. Their racism emerges the moment they leave the realm of ideas and get unleashed onto actual Americans.

Needless to say, if your ideas are racist as soon as they’re no longer theoretical, then you are left with their racism and little else. And to persist in applying these ideas, despite the havoc they wreak and the decades-long outcry people of color have leveled against them, is a form of racism, too.

In Beinart’s case, denying that such bigotry is fundamental to modern Republicanism is to insist on innocence where all evidence points to guilt. This is the thrust of his piece, ultimately — that there’s nothing intrinsic or irreparable here, that the GOP is well-meaning but “naive” on matters of race and just needs to be set on the right path.

So a few things bear clarifying. The Republican Party is functionally the party of white people, as Beinart’s colleague Ta-Nehisi Coates has written. A 2013 Gallup poll found that 89% of the party’s support base was white non-Hispanic, meaning that just 11% were black, Asian, Native American or nonwhite Hispanic.

The GOP looks this way in large part due to the Southern strategy. In 1964, Barry Goldwater’s presidential campaign opposed the recently passed Civil Rights Act as an appeal to white racists in the South. Goldwater lost the election, but won several Southern states that had traditionally gone to Democrats. Richard Nixon rode the same strategy to the White House in 1968. Republicans haven’t looked back since.

The racial hostility that animated the GOP’s Tea Party base during the Barack Obama presidency proved this strategy was still viable even 50 years after it was first weaponized. Trump took it to the next level, first by attaining political relevance via a racist smear campaign against his black predecessor, and second by waffling on his condemnation of white supremacists and installing white nationalists in his cabinet.

None of this is incidental. It is not a fluke in the GOP’s otherwise unsullied path from theoretical conservatism to actual political power. The Republican Party has been viable since the 1960s because it has consistently shored up the white vote by appealing to white resentment — most recently by endorsing a man for president who also secured the backing of the Ku Klux Klan.

And it doesn’t actually matter that some individual Republicans harbor no clear racial animus. It remains that they owe their status as America’s ruling party to the very racism of which they fear being accused. For decades, these same alleged nonracists have stood by while more rabid bigots have commandeered their ideology, and accepted race-baiting so long as it was espoused by people who shared their affinity for small government and tax cuts.

This is not naiveté. It is a politically expedient power grab that has lasted more than half a century. And in Beinart’s estimation, it is still insufficient to assert that bigotry is essential to modern conservatism’s DNA.

The real problem, however, has less to do with the “racism” label. It concerns how racism manifests in our lived reality through GOP-backed policy. In a country whose basic infrastructure and foundational wealth would not exist without black slavery, and whose territory would not exist without the large-scale killing and forced displacement of Native Americans, dodging the “racist” label in the United States may seem like starting a marathon from several miles behind the starting line.

As a consequence, American nonracism, or antiracism, has traditionally hinged on one’s commitment to undoing these foundational inequities. The modern Democratic Party has failed to do this in any meaningful way — Beinart’s dichotomy is misleading, anyway, as both parties can be and often are racist. But comparatively, Democratic officials have proven more likely to counter these inequalities than their GOP counterparts.

Democrats generally support women’s rights to bodily autonomy, specifically as it applies to abortion access. They generally support funding the kind of public services and social safety net that lifted huge swaths of white families into the middle class under Democratic President Franklin D. Roosevelt’s New Deal, but were denied to black Americans. They have far more successfully integrated people of color into their leadership apparatus, including giving the U.S. its first black president.

Republicans have chosen a slightly different route. They have fought to restrict access to abortion, particularly in Southern states where the burden of such reduced access falls most heavily on poor women and women of color. They have opposed minimum wage hikes and eroded union protections for workers where they’ve been able. They’ve fought to cut public assistance in places where black people live, and are thus more likely to benefit. They have aggressively gerrymandered the United States in ways that have eroded nonwhite political power, and enacted voter ID laws that disproportionately hamstring black people’s ability to vote.

And in hypocritical contradiction to their purported belief in small government, conservatives are often enthusiastic supporters of law enforcement, and the police’s requisite right to kill American citizens without facing any real legal consequences. It is likely no coincidence that the victims of police shooting deaths are disproportionately black and Native American.

In the end, whether the Republican Party is fundamentally racist boils down to a few simple questions that have little to do with the theoretical salience of their ideas: Do the policies they champion harm communities of color more then they help them — even if, in theory, they appear to be colorblind? Do the policies they champion aid white people disproportionately at the expense of those same communities of color? And is the function of these policies a constant reaffirmation of the laws and practices that created America’s enduring racial caste system to begin with?

Despite Beinart’s claims to the contrary, there’s little evidence to suggest that treading more gently when it comes to confronting these iterations of GOP racism will actually erode GOP racism. In his advocacy for this approach, the author declines to name a single time in history when no longer using the “nuclear epithet” — calling conservative white people “racist” — has actually made them less racist. It’s one thing to make room for nuance and avoid broad strokes. It is another to ignore proof when it’s sitting in front of you. Beinart’s piece suggests a fundamental Republican innocence and naiveté where the real fundamental element is bigotry. It is remarkable that this is even controversial to point out. And if it hurts Republicans’ feelings to face that reality, then so be it.