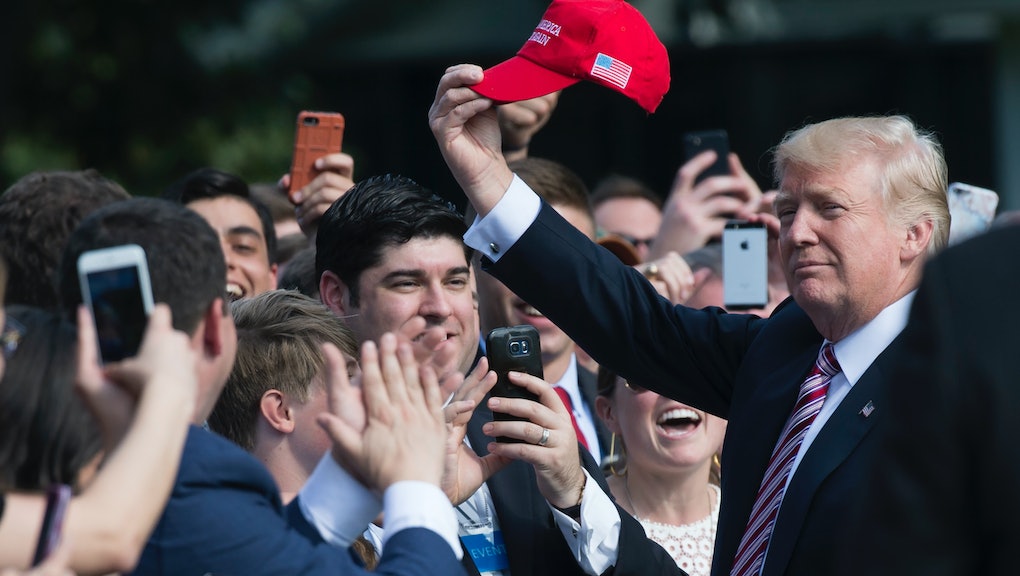 Poll: 82% of Trump supporters would vote for him again

At least eight in 10 Americans who supported Donald Trump in 2016 would vote for him again if they had the chance, according to a Politico/Morning Consult poll released Thursday.

Despite a rough year in which he’s failed to follow through on campaign promises, faced open hostility from members of his own party and remains mired in an intensifying Russia probe, 82% of Trump voters say they don’t regret their 2016 vote and would do it again, the poll found.

That’s a lot, given that Trump’s overall approval rating hasn’t even hit 40% since September, according to Gallup. One year after his unlikely election victory, just 38% of Americans approve of the job the president is doing, compared with 55% who disapprove.

That 82% of his backers say they still would’ve voted for him knowing what they know now speaks to the deep divisions that remain one year after the election — and shows the extent to which Republicans continue to stand by their man.

Trump losing his margin of error?

The poll also shows that support for Trump among his base is waning, though.

Other recent surveys have shown that despite remaining significantly more popular among Republicans, enthusiasm for Trump is decreasing amid a stalled legislative agenda, the Russia investigation and an endless stream of feuds and scandals.

That nearly 7% of Trump voters in the Politico/Morning Consult poll say they would not have voted for him again in 2016 seems to indicate that Trump — who lost the popular vote last November and, despite his claims to the contrary, pretty narrowly won the electoral vote — is losing his margin of error.

That could cost Republicans in 2018 and Trump in 2020, if he makes it that far and decides to run again.

“Forty percent [approval] is not a number you would walk into a re-election and win,” John Fortier, director of the Democracy Project at the Bipartisan Policy Center, told Newsweek in late October, reacting to that week’s bloodbath for Trump in the polls.

He and the Republicans may have seen a preview of that this week, when — in what has been widely interpreted as a rebuke of the president — Democrats dominated elections in Virginia, New Jersey and elsewhere.

Trump — who had publicly supported Republican Ed Gillespie’s gubernatorial bid in Virginia — tried to distance himself from him after being bested by Democrat Ralph Northam on Tuesday.

But his unsuccessful overtures to sway voters in favor of Gillespie — and Luther Strange in Alabama’s Republican primary back in September — strongly hint at the president’s declining political clout.

According to the Politico/Morning Consult poll, just 76% of Trump voters say they would back him in 2020 against a nameless Democratic opponent. Eight percent say they’d vote against him.

But only a little over half of voters polled even think he’ll make it that far.

According to the poll, just 52% of voters believe Trump will finish his full first term, with 37% predicting an early exit.