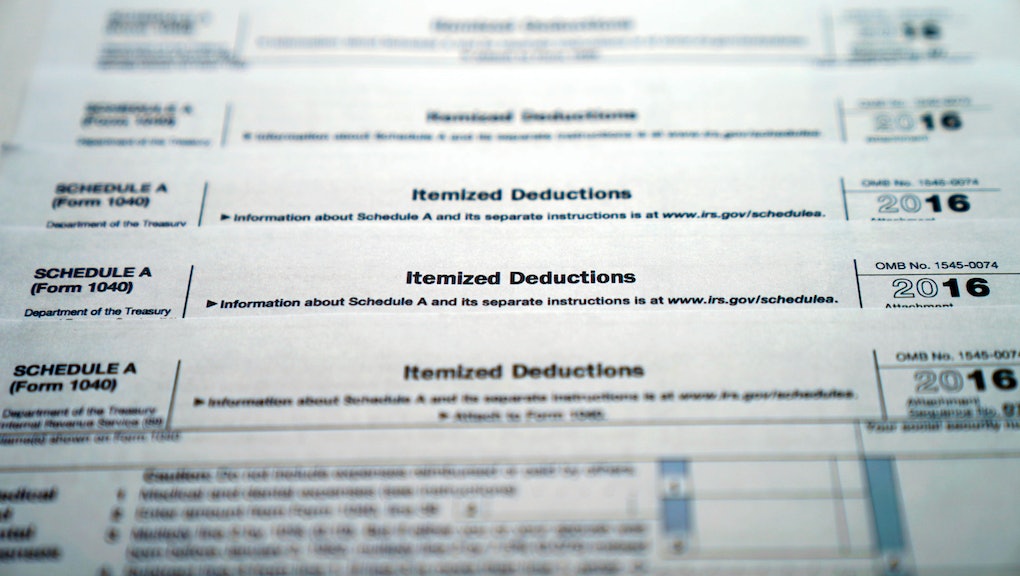 Tax Plan 2017: How the Senate Republican tax reform bill affects you and compares to the House plan

The Senate released a 250-page markup of their version of a bill to overhaul the tax code late Thursday. In several crucial ways, it is similar to a House bill released on Nov. 2 by the House Ways and Means Committee — despite key changes driven by criticisms that the House version did not adequately prioritize the middle class.

At their cores, both the House version of the tax reform bill and the Senate plan are similar: They both slash corporate and personal taxes while eliminating some of the deductions taken by people who itemize their bills. Like the House bill, the Senate’s version also roughly doubles the standard deduction, and reduces the corporate tax rate from 35% down to 20%. Unlike the House bill, the Senate’s version doesn’t implement the corporate tax cut right away, delaying it instead until 2019.

The Senate’s version preserves many deductions that were controversially repealed in the House’s version — like those on student loan interest, high medical expenses and adoption expenses — but does away with some popular deductions as well, including those on moving expenses, tax preparation services, and an exclusion for bike commuters. The Senate version would also make it harder for people who incur losses due to fires, floods, and burglaries to deduct those losses by limiting the deduction to situations where the president has declared a natural disaster.

Another big difference that could be a sticking point? The Senate bill goes further than the House in repealing state and local tax deductions, which could anger Republican voters in states with high taxes. The Senate plan includes tax breaks for corporations, high earners and inheritances — but in certain cases does not go as far as the House bill.

To be sure, either plan would have a number of hurdles to clear before any of the provisions become law: In addition to needing to get through the amendment process and to be passed by each chamber, Congress will also have to reconcile the two versions they come up with before something can go to President Donald Trump’s desk.

That said, the stakes are high, and pressure on GOP lawmakers to get something passed mounted even further on Tuesday, after Democrats logged a series of wins in local elections: “If we don’t produce it’ll get worse,” South Carolina Sen. Lindsey Graham told CNN, implying that the GOP sees passing tax reform as crucial to keeping a majority after next year’s midterm elections.

Here’s what we know for sure about the Republican tax reform plan that might eventually become law.

1. Both bills change the tax brackets.

One of the main ways the House GOP bill would change taxes is by condensing the number of brackets. This is pretty essential for delivering any tax benefits to the middle class because a pretty small minority of taxpayers — 30.1%, according to the Tax Foundation — actually itemize their tax bill to claim most of the deductions that the bill would change. The House bill reduced the number of brackets from its current seven to just four: 12%, 25%, 35% and 39.6% for the highest earners.

In contrast, the Senate bill keeps the current number of brackets at seven, but makes a few changes, notably, by reducing the top bracket from 39.5% to 38.5% bracket.

Those deductions are likely important to Republican voters in highly taxed blue states like New York, California and New Jersey, states which have GOP House reps but not Republican senators. Some House members have already said they won’t back the House bill because it would effectively raise taxes on too many of their constituents.

Notably, some of the biggest wins for Democrats on Tuesday came in blue state suburbs, particularly in Virginia. Keeping state and local taxes is unlikely to do the GOP any favors in Republican-leaning suburbs of New York and New Jersey, a point former journalist Joshua Benton made on Twitter.

Like many deductions, the value of state and local tax deductions is mostly taken by families making $100,000 or more — but perhaps more disconcerting to the middle class is the fact that states worry that the new rules would force them to make spending cuts.

Without knowing that state and local taxes can be written off, it gets a lot harder for states to find ways to make money in the event of budget shortfalls. Some of the biggest beneficiaries of local and state public spending, as Georgetown’s Nora Gordon noted in a recent policy brief, are children in public schools.

3. If you’re in the middle class, your taxes might still go up.

The House bill would actually hike taxes for some Americans, according to several analyses from various groups, including the Joint Committee on Taxation, which forecasts that one in five households will see their bill go up within the next decade if the law is enacted. In 2019, 11% of households making between $75,000 and $100,000 would see a hike.

Most of the people seeing hikes are already high income, but according to estimates from the Tax Policy Center, roughly 9% of the middle 20% of earners would see a tax increase as soon as 2018, with an average of about $1,000. One estimate, from the Penn Wharton Budget Model, finds that the tax bill would shift the tax burden toward higher-earning groups — but not before the year 2040, and possibly not if the bill raises the deficit, as the house version is expected to do.

While it’s still unclear exactly how the Senate plan would raise or lower taxes for the middle class, both plans face criticism for including wider tax breaks that benefit the wealthy: in the House bill, for example, with a repeal of the taxes on large inheritances and a tax break for parents of children in private schools. And notably, the Senate tax plan maintains the estate tax — but doubles the current exemption, effectively making it far more generous to those who have millions of dollars to pass on to their heirs.

Simply by scrapping state and local tax deductions, the Senate plan could deal a blow to millions of people in the middle class: Nearly 7.6 million households making between $50,000 and $75,000 a year claimed the deduction in 2015. New York University’s Lily Batchelder also pointed out that, like the House bill, the Senate version repeals personal exceptions that are indexed to inflation and replaces them with credits that are not, which could mean that some middle class families end up paying more taxes than they would now.

Meanwhile, the Senate bill leaves in some deductions disproportionately used by the wealthy, including, for example, the mortgage interest tax deduction. The Senate plan also scraps the alternative minimum tax, which hits mostly high earners — including President Trump, who reportedly owed more than $31 million in 2005 because of the tax.

4. Your health care costs could rise.

Both Senate and House plans could affect your health care spending. For one, members are reportedly considering a provision to repeal the individual mandate in the Affordable Care Act, which the Congressional Budget Office estimates would raise premiums by about 10% on average. Even if that repeal is not in the language of the Senate bill, the provision could be added later.

Many of the people who claim the medical expense deduction are people over 65 or the parents of children with serious disabilities — perhaps one reason why the the Senate version keeps it.

A final concern for the middle class looms: One of the ways the Senate bill appears more moderate than the House version is by phasing in corporate tax cuts instead of having them kick in right away. Politico reports that Trump is unhappy with the change, and wants to see the corporate tax rate cut right away. But regardless of whether the cut is abrupt or delayed until 2019, any large cuts at all could lead to big budget shortfalls that seem less scary in the short run — but grow over time.

The House bill does a similar phase-in trick with one of its less popular provisions, the repeal of the estate tax — which affects the estates of only those individuals worth $5.49 million or more — by phasing in a full cut to the estate tax by the year 2024.

Budget shortfalls from cuts — estimated at $1.5 trillion in new budget deficits over a decade — has lead many, like the Tax Policy Center’s William Gale, to predict that cuts to entitlement programs and the social safety net could be just around the corner. After all, cutting taxes is expensive — and losing provisions like the AMT could cost the government $440 billion in lost revenue over a decade.

Indeed, the budget resolution — a series of recommendations, as Vox notes, that makes tax reform possible — suggests social safety net services be cut to offset lost revenue. Medicare spending would be cut by almost $500 billion in the next 10 years, non-Medicare health care spending by $1.3 trillion by 2027, and other unspecified entitlements would see another $1 trillion in cuts: all programs that are mostly geared to the elderly and the poor.

Public opinion seems to reflect some of these concerns: A September poll from Pew found that a majority of Americans want to see taxes on corporations raised, not cut.

But there is one group excited about tax reform: Large company CEOs, according to Gary Cohn, President Trump’s chief economic advisor, speaking to CNBC. On Wall Street, the Dow Jones Industrial Average fell as much as 250 points on Thursday — in part over concerns about the bill’s corporate tax cut delay.