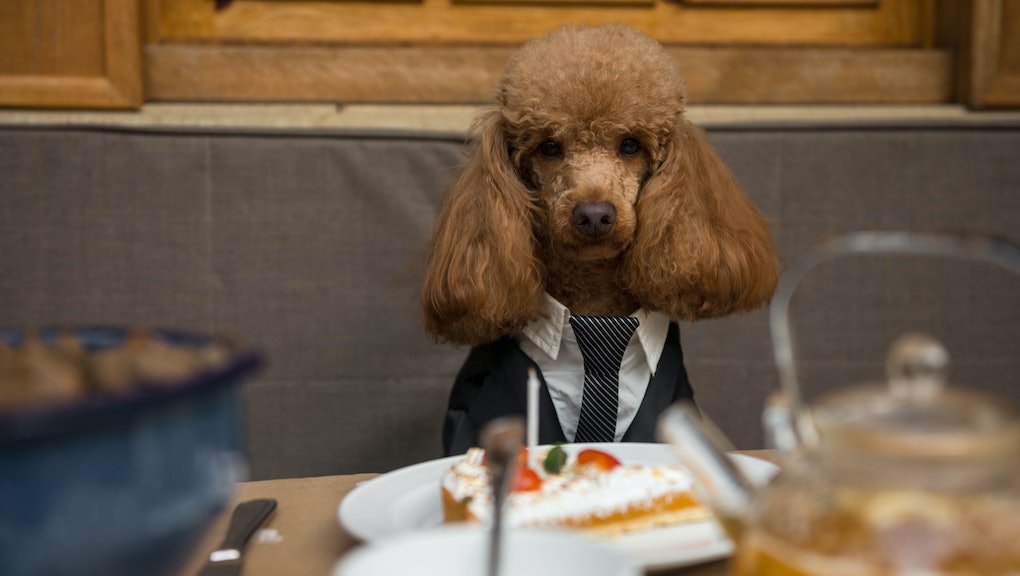 Why is it so hard to drink and dine with your dog in New York?

The barman looks at us with a pained, apologetic expression and points to the pint-sized pooch snoozing in a bag. “You can’t be here with that.” It’s not that they have a problem, he explains, as though it softens the blow. If it weren’t for the Department of Health, they’d love to welcome our furry friend, he assures us.

We should be used to it by now. When we adopted Rosie, a 12-pound Shih Tzu, we knew our lives would change (mostly for the better). But as expats who lived in several dog-friendly cities across Europe, we had no idea how difficult life would be as pet parents in the U.S. Forget all the talk of man’s best friend: America has a problem with dogs.

“Bullshit,” you might say. After all, step outside your front door and the first thing you’ll be greeted by is a waggy-tailed, wet-nosed neighbor. In the U.S., 50% of households have a dog, a figure that rises to 75% for people in their 30s, the Washington Post reported. Americans without a pet of their own are similarly canine crazy, with 68% describing themselves as a “dog person.”

But there are a few places that are conspicuously dog-free: bars and restaurants.

That’s because, countrywide, the U.S. has some of the world’s most draconian laws when it comes to pets in food and drink establishments. With very few exceptions — some states have introduced bills allowing dogs in outdoor dining areas, and occasionally a bar finds creative ways around the rules – Fido won’t be joining you for happy hour.

As a new New York resident, I looked into why the city was so tough on dogs. Hygiene is apparently the main reason behind the blanket ban. “Animals carry disease-causing organisms and can transmit pathogens to humans through direct or indirect contamination of food and surfaces,” a spokesperson from New York City’s Department of Health said in an email.

Sean Sheer, who runs the Urban Dog blog, isn’t convinced. “There are about 80 million dogs owned as pets in the U.S. and we aren’t seeing a plague of dog-borne illnesses sweeping the human population,” he said in an email. “My dog spends a lot of time in my kitchen and I haven’t caught any illnesses from him yet. I’m guessing dogs don’t pose as much of a health problem as some people think.”

His instincts are supported by health experts across the pond. Doctor Lisa Ackerley advised the British government on its policies regarding dogs in bars and restaurants. “There is no real reason for dogs to be banned in customer areas, so long as they are kept on the floor and under control,” she said in an email. While she admits it is a hot topic — “people get very angry on either side of the debate” — the hygiene argument doesn’t hold up. “It should be up to bar owners and restaurateurs to gauge what’s best for their business,” she said. “Hygiene doesn’t come into it, though.”

Despite the lack of scientific evidence to suggest dogs pose an inherent health risk, local authorities insist on applying the ban broadly, even in establishments that don’t serve food.

Take New York City, supposedly one of the most pet-friendly places in America. Once upon a time, there was a thriving (if not entirely legal) dog-friendly bar scene. Then, around 2010, establishments that once welcomed patrons of the four-legged variety started turning them away.

“For years this was one of the most widely — and gleefully — ignored rules,” the New York Times wrote in 2011. But when the letter-grading system was introduced, health inspectors started clamping down. “The stricter enforcement is bringing to an end a rich tradition of dog-friendly bars in New York,” the article lamented.

Over five years later, you’d be hard-pressed to find a place in the city where you can chill with a beer alongside your pup. Sure, you’ll occasionally hear about “secret” dog-friendly bars, but it turns out the inspectors at the Health Department read the same popular New York newspapers as everyone else.

Floyd, a bar in Brooklyn, was celebrated for its dog-friendly vibe, but soon lost the quality that made it stand out from the rest. “When we opened in 2004, we allowed patrons to bring well-behaved dogs, and it gave the bar a real warmth and character,” co-owner Andrew Templar said in an email interview. Then the health inspectors came knocking. “Many customers were upset when we stopped welcoming dogs; they thought we weren’t fighting hard enough to keep a dog-friendly bar alive. The reality is after two violations you can be shut down and heavily fined. Bar owners let it ride until that second hit, but after that you’re risking everything.”

It doesn’t have to be this way — our friends across the Atlantic are proof of that.

“Where dogs take their servants,” reads the sign outside the Wagging Tail in the British seaside resort of Southport. To describe the café as simply dog-friendly is to do it a disservice. Take one look at the menu, which includes ‘Snuffle,’ a Belgian dog beer, and you’ll quickly realize the place is more accurately described as dog-first.

Since opening just over a year ago, the Wagging Tail has become a hit among locals. “We get a lot of folks without dogs coming in, some who are too old to look after them or who live in nursing homes, and so it becomes quite therapeutic for them,” the owners, Damien and Elizabeth Kerr, said in an email interview.

They haven’t run into any issues so far. “The dogs are often better behaved than kids, and we’ve not had any incidents since we opened,” the Kerrs said. If anything, their pooch-first approach has helped them carve out a niche in a cutthroat industry. “We do believe that you need to do something different in such a competitive market,” they said.

It’s something other shops and restaurants have found as well, Nikki Cummins, of the U.K. Kennel Club, said. “We surveyed dog-friendly businesses, and 71% of owners said they’d gained new customers after they began to welcome dogs,” she said in an email interview.

Europe might have a reputation for red tape and crushing regulations, but at least in the area of pets in the dining scene, it’s far more laissez faire than the U.S.; The decision on whether to welcome dogs is entirely at the discretion of business owners.

“The only legal obligation on the owner is to make sure there is no risk of contamination and that all food preparation areas are up to specified hygiene standards,” the Kennel Club explains on its website.

Almost every British town and village has at least one dog-friendly establishment, and it’s not just mom-and-pop coffee shops or dive bars getting in on the act. In fact, some of the country’s posher and more expensive restaurants have also opened their doors to dogs. In London, for example, the members-only George in Mayfair has welcomed many A-list pooches, and the ever-popular Goucho steakhouses host a monthly Sunday doggy brunch.

Could something like this ever catch on here in the U.S.? Even the biggest dog-lovers aren’t convinced. “Some people will always see dogs as filthy beasts and they don’t want to be saddled up next to one while diving into a $60 porterhouse,” Dan Ruth, a former manager at the now-defunct Brooklyn Ale House, said in a Facebook message. Back in the day it was so puppy-friendly that locals referred to it simply as “the dog bar.”

“The puppy prohibition mostly exists because within the law on the books, ice is considered food,” Ruth said. “I could understand if we’d had a kitchen and were making food, but we were a little neighborhood bar with a pool table and a dartboard.”

Health inspectors might not agree, but whatever the so-called health hazards involved, many bar-owners and dog-lovers would be happy to take the risk. As Brooklyn bar owner Templar said, “having a beer with a dog at your feet or sleeping in your lap is such a natural event for so many of us, there ought to be a place that caters to that need.”