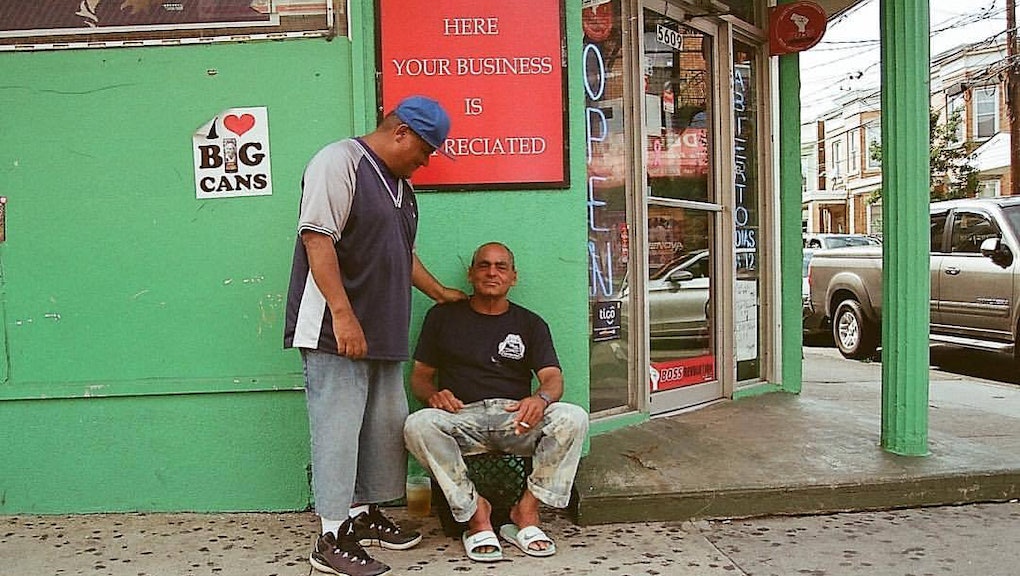 Abib Ascencio says she can’t relate to American culture. The 25-year-old, who was born in Amsterdam to a Dominican mother and a Salvadoran father, has lived in New Jersey since she was 2. But, as she said in a phone interview with Mic, “When I think about American culture, I think of whitewashing, [of] making things white,” explaining that ’80s movies, for example, feature few people who look like her. “Being raised Dominican, you’re around people of color, and in the movies there are only white people.”

Ascencio is hoping to change this for future generations with her work as a documentarian. “I document what I relate to. When it comes to hood culture, I document immigrants, I document black Americans, the lifestyle of what it means to be an immigrant,” she said. The artist shares a lot of her work on her Instagram and will have an exhibit at Art Basel in December in Miami.

Her photography features “real people, real shit, hood shit [that] me and many others can relate to,” from Modelo beers to people selling fake gold to smiling kids biking on sidewalks,” Ascencio said. “A lot of my work is based on the livelihood of the neighborhood I live in and giving the people there a voice. I’m documenting the history of immigrants in America.”

With this mission, bodegas are a natural fit for much of Ascencio’s storytelling. Growing up in the Hill, an area in Jersey City, the bodega was one of the few places she could go on her own. “My mom was pretty strict and our neighborhood was hood. It was my opportunity to see my friends and grab a juice — and I would take my sweet time at the bodega,” Ascencio said, adding that the bodega’s immigrant-owners were “basically family.”

In September, the artist curated her first show, called Bodega Love, which featured work from more than a dozen artists. “I wanted to gather people together the way I know that the bodega does,” she said. “I wanted to bring the congregation to life and make it artistic.”

Ascencio’s corner-store focus caught the attention of documentary filmmaker Brian Scully, who then worked with Ascencio to make a mini-doc about the role bodegas play in urban communities — specifically in Hudson County, New Jersey, where they both live.

The documentary shows Ascencio speaking about her drive to capture the community in which she grew up. “It’s a turn-up place on your block, a congregation of people who want to just hang out for, like, five [or] 10 minutes. And you can do that at the bodega,” Ascencio says in the video.

Ascencio sees what she captures on film as art, but says some ridicule her for shooting everything she sees in the community. “I feel like people take it for granted,” she said. “I see it as a history, and one day people are going to wonder what it was like to live in 2016, 2017, 2018, and they’ll understand what I did.” It would be tragic for these stories to go untold, she said, as it would perpetuate the experience she had being unable to connect with American culture.

When asked how President Donald Trump’s political stance on immigration affected the urgency of her work, the artist said, “It made me go even harder.” In another mini-doc, Ascencio films the Latinxs of upper Hudson County to a soundtrack of Trump soundbites. The opening scene shows men working in a flower shop, a woman pushing a stroller, a smiling man behind a counter and a beautiful garden adorned with religious statues.

While the images roll, you hear Trump say: “When Mexico sends its people, they’re not sending their best ... they’re sending people that have lots of problems ... They’re bringing drugs. They’re bringing crime. They’re rapists. And some, I assume are good people.”

The juxtaposition is jarring — and that’s the point.