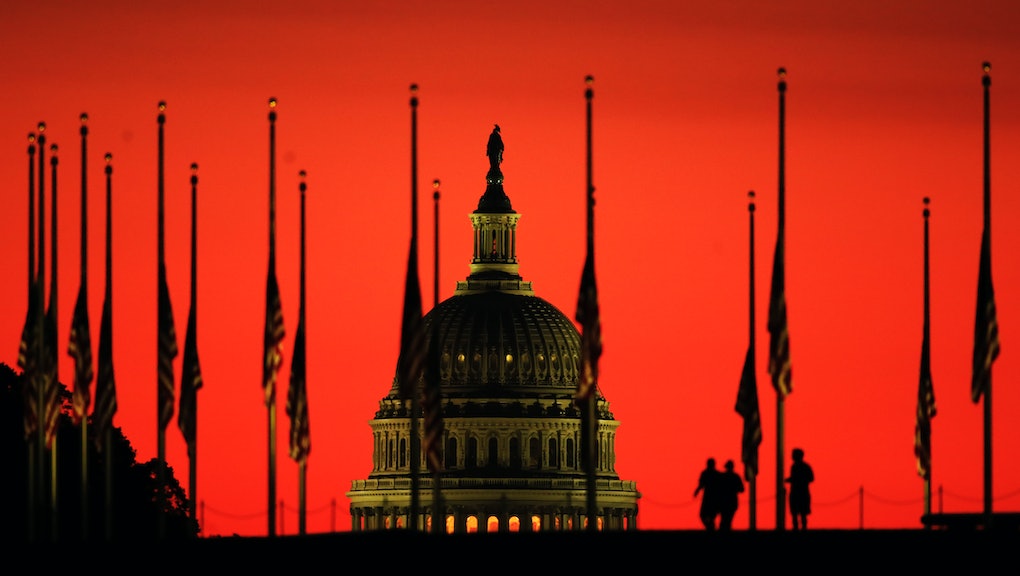 Wave of Congressional Republican retirements leave Democrats with opportunities in 2018

A wave of Republicans are heading for the exits from Capitol Hill, announcing their retirements at a faster clip than Democrats, and providing Democrats with a number of pick-up opportunities as the 2018 midterm elections draw near, according to CNN.

Rep. Bob Goodlatte, the Virginia Republican and chair of the House Judiciary Committee, was the latest among a slew of retirements, announcing on Thursday that he would not seek re-election next November.

He becomes one of 17 GOP lawmakers in both the House and Senate to either announce their retirement or resignation from Congress, without seeking another office, according to statistics from the House Press Gallery. And more retirements are likely to come.

Democrats, on the other hand, have seen very few retirements.

So far, every Senate Democrat up for re-election in 2018 is running. And just two House Democrats have announced they are retiring without seeking other office.

Here’s the ongoing list of Congressional retirements, in alphabetical order:

Chaffetz announced in April that he wouldn’t run for re-election in 2018, and ended up resigning in June before completing his full term.

Corker, one of President Donald Trump’s chief critics, announced in September that he would not seek re-election in 2018.

Trump won Tennessee with 61%, making this a safe Republican seat.

Dent isn’t running for re-election in his Pennsylvania district — which includes the suburbs of Harrisburg and the Lehigh Valley —which Trump won with 51% of the vote.

The vacancy leaves Democrats with a pick-up opportunity in 2018.

Trump won Duncan’s Tennessee House district with 65% of the vote in 2016, while 2012 GOP nominee Mitt Romney won it with 67% four years earlier, making it a safe Republican seat.

Facing opposition from both the left and the right, Flake announced his retirement in October.

He leaves vacant his Arizona Senate seat, which Democrats are targeting in 2018.

Democrats have a strong recruit in Rep. Kyrsten Sinema, who is vacating her own House seat to run for Senate.

Republicans are likely to face a bruising primary battle in this state, which just barely voted for Trump in 2016. Trump defeated Hillary Clinton, 48% to 45%, in 2016.

Goodlatte announced his retirement from his Virginia district two days after Democrats trounced Republicans in the gubernatorial elections on Tuesday.

However Trump won Goodlatte’s district with 60% of the vote in 2016, making this a safe Republican seat.

Hensarling is not running for re-election in 2018.

Trump won Hensarling’s district in Texas with 63% of the vote, making this a safe Republican seat.

Jenkins’ exit from Congress provides Democrats with a pick-up opportunity in 2018.

Trump won her district with 56% of the vote.

Roll Call listed the race among the competitive open seats in 2018, saying it leans Republican.

Johnson’s seat is one of a number in Texas that shifted toward Democrats in 2018.

LoBiondo has been a Democratic target for years. So his announcing his forthcoming retirement on Tuesday came as welcome news to Democrats, who will try and pick up the seat in 2018.

Former President Barack Obama won the district twice, while Trump won it narrowly in 2016 with 51%.

Murphy resigned from Congress mired in scandal, after revelations that he encouraged a mistress to get an abortion — despite being an anti-abortion crusader — surfaced.

Trump won Murphy’s Southwestern Pennsylvanian district with 58% of the vote in 2016.

A special election to fill the vacancy will be held in March of 2018.

Poe is yet another Texas Republican lawmaker who won’t run for re-election in 2018.

Poe’s district is another Texas seat that shifted towards Democrats in 2016.

Reichert has been a white whale for Democrats for years.

Roll Call says Reichert’s retirement makes this seat now tilt Democratic in the 2018 elections — which would amount to a pick-up for Democrats.

Ros-Lehtinen is retiring from her Miami-based district when her term expires.

And her exit gives Democrats a near certain pick-up in 2018.

Democratic presidential candidates have won her seat for years. But Ros-Lehtinen was able to defy that trend and hold on to the seat.

Elections analysts don’t think there are other Republicans with that same crossover appeal, with Roll Call saying her seat leans Democratic in 2018.

Shea-Porter is one of just two Democrats to announce their retirement.

Her New Hampshire House seat would have been competitive whether she was running for re-election or not. It’s switched hands multiple times since 2006, when she first won.

The seat is a toss-up, according to Roll Call’s ratings.

Smith is yet another Texas Republican retiring in 2018.

Tiberi announced that he will resign from his Ohio district before his term expires.

Trott is retiring from his Michigan House seat.

The district is one of the competitive seats on the map, with Roll Call saying the district leans Republican.

Tsongas is one of two Democrats so far to announce they are retiring without seeking other office.

Clinton won her district with 58% of the vote, making it a safe seat for Democrats.