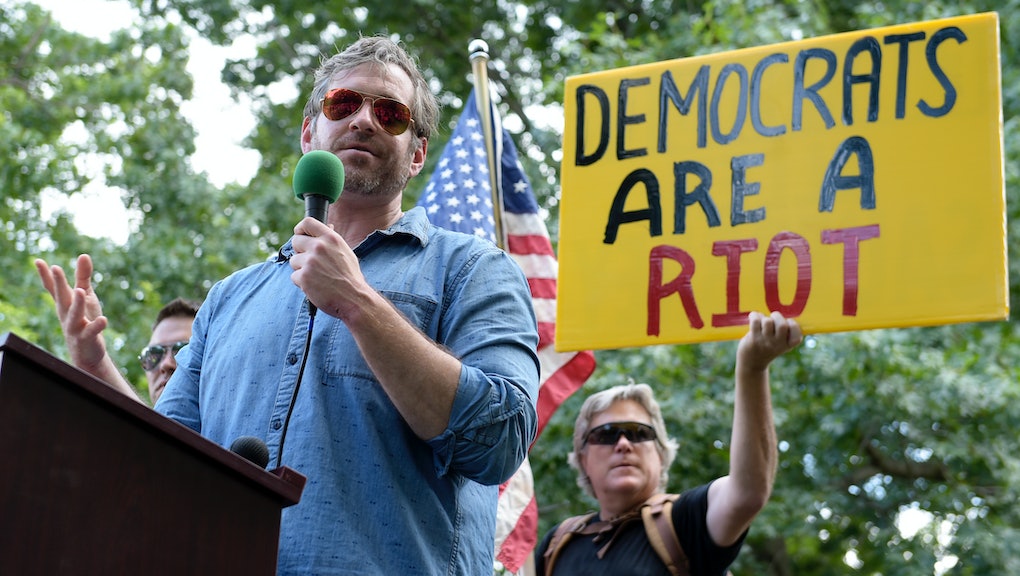 In a time where our media is teeming with very real and very serious allegations of sexual misconduct against powerful men — most recently, Alabama Senate candidate Roy Moore — something as absurd as Pizzagate almost seems quaint in retrospect. Almost.

Remember Pizzagate? Interest in the baseless, internet-driven theory — that Hillary Clinton ally John Podesta, his partner James Alefantis and others were all running a pedophilic sex ring out of Alefantis’ D.C. pizza restaurant, Comet Ping Pong — has fizzled out a bit in conspiracy circles since the height of its popularity in late 2016.

After allegations surfaced that Moore — a natural ally to many of those on the new or alt-right — molested a 14-year-old girl, we thought we’d check in on a few people who signal-boosted Pizzagate, or theories like it, to see how they were taking the news about Moore this week.

Alt-right writer and social media personality Mike Cernovich is one of the all-time greats when it comes to accusing others of pedophilia — whether or not the claim is substantiated is often beside the point.

Either explicitly or implicitly, he’s accused Podesta (of course), but also former vice presidential candidate Tim Kaine, the staff of Salon, the editors of the New York Times, the BBC, the Clintons themselves, Sen. Ben Sasse and dozens of others on Twitter alone of being secret pedophiles.

Though Cernovich now attaches some caveats to his Pizzagate theories, he’s best-known for popularizing it in its early days, most notably in a November 2016 post alleging that the Clinton “inner circle” was involved in a “sex cult” that included “child trafficking” and engaged in “symbolic acts of cannibalism.”

But he has taken a more cautiously skeptical approach to the allegations facing Roy Moore. In a Periscope video he described as his “official statement” about the candidate, Cernovich seemed more interested in talking about New Jersey Democrat Sen. Bob Menendez than Moore.

“If Roy Moore tried to kick it with a 14-year-old, I’m not a Democrat — I won’t defend that,” he said. “I’m not the one arguing for pedophile acceptance. So if it’s true, string the guy up, man. I got no problem with that.”

But Cernovich quickly began to undercut the claims of the three women, saying he was not “inclined to believe” the allegations, referring to them as part of a “partisan witch hunt.” He pointed to what he called an unfair double standard in the media’s coverage of Moore’s allegations, versus those facing Menendez.

Menendez was once the focus of an FBI investigation in 2012, after a Washington, D.C., advocacy group shared an anonymous tip that he was taking sex-tourist trips to solicit underage prostitutes. That story, however, quickly fell apart under scrutiny, and investigators said they did not find any evidence to substantiate the allegations.

“Bob Menendez is facing federal criminal charges, is accused in a court of law, by prosecutors, of underage sex trafficking, and [the] media[’s] like, ‘Let’s pretend it isn’t even happening,’” he said. “They’re just covering it up.”

One reason the media might not be reporting that Menendez is facing sex-trafficking charges is because he’s not: The senator is on trial for bribery charges related to allegations that he did some favors for a rich friend who often gave him campaign contributions and lavish gifts. These are serious charges for any public official, to be sure, but not quite child sex trafficking. Suffice to say, despite Cernovich’s claims, it’s also a case that’s received a fair amount of media attention.

“A lot of people go, ‘Well, why would you believe the Hollywood [accusations] and not this,’ and that’s because, when the media goes after Hollywood, they’re going after their own side,” Cernovich said in Thursday’s video. “Then I’m like, ‘Shit, it must be true, [because] you don’t shoot at your own side unless they’ve really done something bad.’”

An alt-right figure known for being the first to creepily livestream from Comet Ping Pong to “investigate” Pizzagate, Jack Posobiec took a similar tack, calling the allegations “serious” before a storm of tweets aimed at discrediting them, as well as drawing false parallels between the allegations facing Moore and Menendez:

Posobiec also fit in a joke about the real predators: those behind Pizzagate.

It was Friday morning, though, when Posobiec took it to the next level, actually tweeting a photo of Moore’s accuser Leigh Corfman, as well as identifying a recent place of employment. (Mic has redacted details in the below screenshot.)

Posobiec later deleted the tweet — apparently on the advice of Cernovich — saying he was only sharing information publicly available from her Facebook page and featured in a Heavy article that was publicly available from Corfman’s Facebook page. However, the original article blurred Corfman’s face and did not share the name of her place of employment, as Posobiec did.

He then shared what appeared to be unsourced, anonymous text messages that implied Corfman had made false accusations before:

Posobiec then spent a good part of the morning defending himself on Twitter from claims he had doxed a childhood sexual assault victim.

Alex Jones, the controversial host and founder of the conspiratorial-right news website Infowars, once apologized for promoting the Pizzagate conspiracy. Both he and Infowars editor Paul Joseph Watson have spoken at length about the cabals of pedophile rings they believe “rule the world.”

So how does he feel, then, about the allegations against Moore?

In subsequent tweets and retweets, Watson also draws false parallels to Menendez (are any patterns jumping out at you yet?) and shares an article from a far-right blog that reads, “There’s no reason to believe any of these stories, and there’s no reason to care that [Moore] allegedly kissed an ‘18-year-old cheerleader’ who said she was ‘flattered by his attention,’ as one of the stories claims.”

On his broadcast Thursday, Jones also tried to discredit the victims by misrepresenting the allegations they made against Moore.

But one of the victims told the Washington Post that Moore drove her to his home and molested her when she was 14.

Infowars also published a post Friday reporting on an unsubstantiated rumor circulating on Twitter that “a reporter was taped while reportedly offering a woman $1,000 to accuse Senate candidate Roy Moore of sexual improprieties.” No recording or other information was posted online.

Cassandra Fairbanks — who supported Bernie Sanders in the 2016 Democratic primary before becoming a Trump supporter — once tweeted about imagined “rape epidemics” that befall “every country...flooded with refugees” in Europe. She was also one of the earliest signal-boosters of the Pizzagate conspiracy theory, writing a widely shared post about it for WeAreChange.org.

While Fairbanks doesn’t directly weigh in on the theory’s claims in her post (and said she herself had no evidence the emails using coded language to refer to sex trafficking), she continued to give the theory undue credence: traveling to Comet Ping Pong, attending Pizzagate protests, and appearing on shows like Infowars last year, where she acknowledged she felt the Pizzagate theorists may have a point, adding the whole thing was “pretty frightening.”