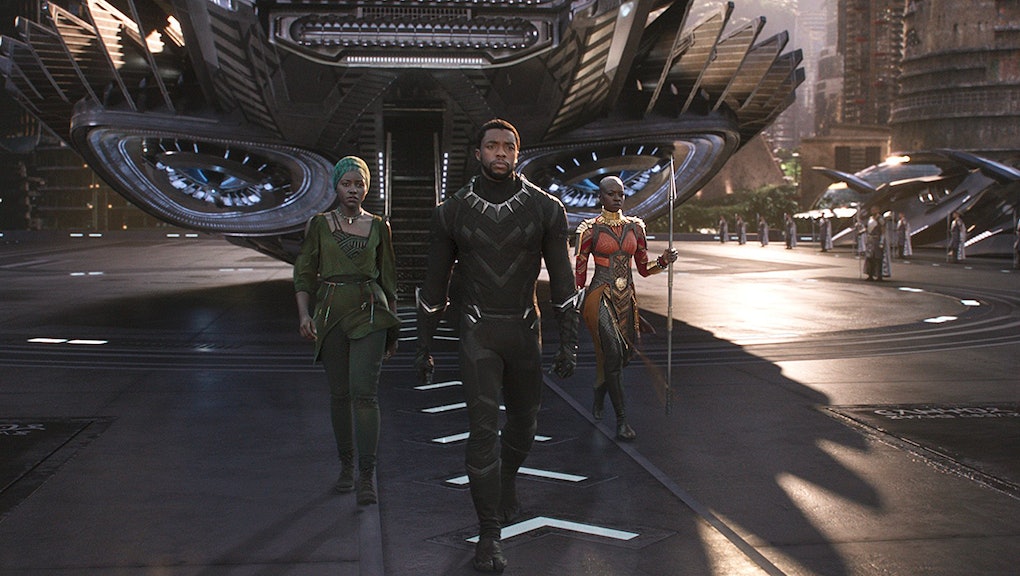 Marvel’s Black Panther lives in the present, but there’s plenty that would suggest otherwise. Slated for a February 2018 release, the movie — which is directed by Ryan Coogler (Fruitvale Station, Creed) — showcases the world of Wakanda: a fictional African nation that’s the most technologically advanced place on the planet. The country is led by King T’Challa, a.k.a. Black Panther (Chadwick Boseman), and is rich with all sorts of sci-fi tech: futuristic hologram beads, self-materializing superhero costumes and some of the most mind-blowing aircrafts the world’s ever seen.

But Wakanda is more than just a fun spectacle; it represents something much more magnificent and powerful — a version of Africa unaffected by the external world, one that was allowed to pursue its own march toward spectacular progress.

When the most recent trailer for the movie was released in October, people weren’t just excited, they were jubilant. Now, it’s an event pretty much every time there’s a new Marvel movie but — no disrespect to Spider-Man: Homecoming, Thor: Ragnarok, etc. — those blockbusters don’t normally have an entire culture of people impatiently awaiting their release. So what makes Black Panther especially noteworthy?

The secret sauce of Marvel’s Black Panther is Afrofuturism — an arts form that combines science fiction with black culture to create a future informed by blackness. On its face, Black Panther masquerades as Marvel’s latest superhero flick. Dig deeper and you’ll find the movie’s true identity: an Africa-set, Afrofuturist film — made for black people, by black people — powered by a Disney budget.

Afrofuturism has been looking ahead for decades

As a term, “Afrofuturism” is often credited to author Mark Dery, who reportedly coined it in an early ’90s essay for Duke University Press called “Black to the Future.”

(Arizona State professor Michael Bennett noted in a phone interview with Mic that he also gives credit to Mark Sinker, editor of U.K. music magazine The Wire, who “didn’t use the term [Afrofuturism] but he expressed many similar concepts that hit the notion on the chin.” Other early proponents, Bennett mentioned, include professor Alondra Nelson and author Sheree Thomas.)

But as a concept, Afrofuturism dates much further back than the early ’90s, making Black Panther the latest in a long line of works to blend sci-fi and black culture.

The original Star Trek series from the 1960s isn’t overtly Afrofuturistic, but it does feature actress Nichelle Nichols, who played Lieutenant Uhura and who was the first black woman to portray a sci-fi character. And that was a significant milestone — so much so that, in a 2011 interview with NPR, Nichols said she nearly left the show to pursue other roles, but was dissuaded by none other than Dr. Martin Luther King Jr. Nichols said that when they first met, King told her, “You are marching. You are reflecting what we are fighting for.”

More classically Afrofuturistic works include the writings of author Octavia Butler, like 1979’s Kindred, a story about time travel. Or 1987’s Dawn, which is part of the Lillith’s Brood series, wherein a black woman works with aliens to bring back the human race after a devastating war. (Dawn is being made into a TV series led by director Ava DuVernay.)

Music can be Afrofuturistic, too. The songs and visuals brought to us by jazz musician Sun Ra in the 1950s, ’60s and ’70s contain the common theme of space being where black people can live and escape the evils of the actual world.

In the 1974 film Space Is the Place, which Sun Ra co-wrote and stars in, he plans to settle a new planet with an African-American colony. At one point, Sun Ra notes that his planet sounds different from Earth, as there are no sounds of guns, anger and frustration. “We set up a colony of black people here,” Sun Ra says, “see what they can do on a planet all their own without any white people there.”

It’s not just Sun Ra, though; Afrofuturistic vibes are also woven into modern black music. Jimi Hendrix, Missy Elliott, George Clinton, Solange and more are all part of this lineage. In the 2010s, Janelle Monáe is carrying the Afrofuturism torch proudly, with 2007’s Metropolis EP and albums like 2010’s The ArchAndroid and 2013’s The Electric Lady. The latter LP’s title track offers lines like, “She can fly you straight to the moon or to the ghettos/ Wearing tennis shoes or in flats or in stilettos,” and, “I’ll reprogram your mind, come on get in/ My spaceship leaves at 10.”

In film, though, Afrofuturism isn’t about just casting a black person — who is usually Will Smith — in your sci-fi movie.

There’s one aspect to the movement that can sometimes get lost, an aspect that Black Panther seems to nail: ties to Africa itself. “When we talk about Afrofuturism, the last thing we think of, if at all, are people from the continent,” sci-fi author Nalo Hopkinson said in a recent video call with Mic. “It’s in the damn title.”

Black Panther doesn’t just show fictional Africa, it shows it well. “To have something with this broad a reach be positively African and knowledgeably African, there is no way to calculate how vital that is, because we are so badly represented,” Hopkinson said. “This is why when I watch reaction videos to the trailer, there are people bursting into tears because it’s showing us not only as we know ourselves to be, but as we storify ourselves.”

Africa’s aura can be found in many aspects of the movie. There’s the setting, obviously, but take the clothing, for example. In October, Mic published an interview with Ruth E. Carter, Black Panther’s costume designer, who told us that the Maasai people influenced the clothing we see in the movie. “I needed to find a way that I could represent the African diaspora and have the technology infused in the clothes in a clever way, in a regal way,” Carter said. Using real-world tech to her aid, some of the more detailed costumes were made possible thanks to 3-D printing.

Afrofuturism is escapism, and ‘Black Panther’ could be the most mainstream, biggest-budget example of it yet.

Spotting a work of Afrofuturism may seem easy, but there’s a slight stigma with how the label is attached to works by black artists. “A lot of artists are concerned that it’s a catch-all phrase for anyone black that’s making work with sci-fi or surrealist themes,” filmmaker and artist Adebukola Bodunrin said in an email.

But Black Panther is using genuine Afrofuturistic elements to, in Wakanda, create a world that people can feel connected to. And it has folks really excited to see the flick.

The feeling of satisfaction Black Panther viewers get from viewing even just the trailer isn’t just because it’s a Marvel film with a black main character (though this is also important). The movie’s real importance is that, like the works of Octavia Butler and Sun Ra, it offers an entire world to escape into. In Wakanda, we’ve moved past the problems of police shootings of black youth and the court verdicts they result in, or an administration that disregards the voices of many of its black citizens when they publicly protest.

Afrofuturism offers a reprieve from the real world, and Black Panther could be the most mainstream, biggest-budget example of it yet. In February, for roughly two hours, black people will get to live in a world where we’re the coolest heroes, we make the coolest stuff and Donald Trump isn’t president. Afrofuturism can bring a troubled people something truly special: an escape.