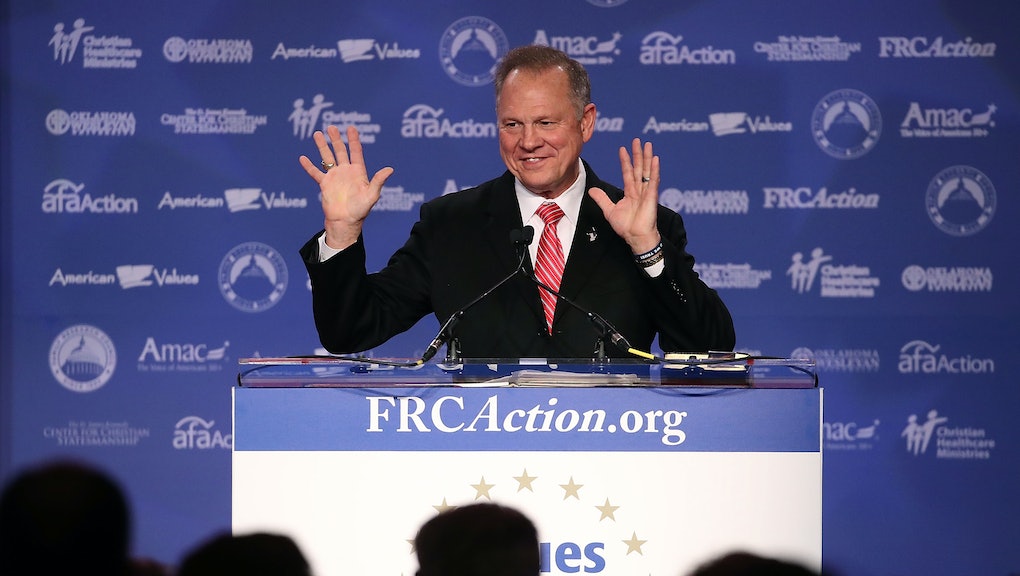 Following the Washington Post’s report that Alabama Senate candidate Roy Moore molested a 14-year-old girl in 1979 and romantically pursued other teenaged women in his 30s, Republicans are calling on Moore to step down from his upcoming Senate race against Democrat Doug Jones.

Moore has denied the allegations, calling them “absolutely unbelievable” during a Veterans Day event on Saturday, and is refusing to voluntarily step down from the Senate race.

“We do not intend for the Democrats or establishment Republicans or anyone else [to] stop this campaign,” Moore said Saturday, as quoted by NBC News. “They are desperate.”

In the midst of a firestorm surrounding the scandal, Republicans in Congress and at the state level have denounced the allegations against Moore, with some calling on the candidate to step aside immediately and others hedging their admonitions, calling on Moore to only step down if the allegations are found to be true.

Here’s a running list of the Republicans who have denounced Moore so far, whether they’ve called on him to step down immediately, said he should step down if the allegations are true, or pulled their endorsements of the candidate.

Speaker of the House Paul Ryan: On Tuesday morning, Speaker Ryan said Moore should “step aside,” citing the credibility of the accusations against him.

Sen. Lindsey Graham (R-S.C.) On Monday evening, Graham reportedly questioned Moore’s efficacy if elected to the senate, and maintained that the GOP’s nominee should step aside for the sake of Alabama, according to Fox News.

Senate Majority Leader Mitch McConnell (R-Ky.): “If these allegations are true, he must step aside,” McConnell said in a statement, which the Washington Post reported was a formal statement “on behalf of all Republican senators.”

On Monday, McConnell said he believes the women accusing Moore of sexual misconduct, and affirmed Moore should “step aside.”

Sen. Orrin Hatch (R-Utah): Hatch tweeted Monday that he agrees with McConnell’s stance that Moore should step aside, and recommended 2017 Alabama Republican primary loser Sen. Luther Strange as an “excellent alternative” to the GOP nominee.

Sen. John McCain (R-Ariz.): McCain said on Twitter that Moore should “immediately step aside” over the “deeply disturbing and disqualifying” allegations.

Former Massachusetts Gov. Mitt Romney: The former presidential candidate and Massachusetts governor tweeted that Moore is “unfit for office,” writing: “Innocent until proven guilty is for criminal convictions, not elections.”

Ohio Gov. John Kasich: Kasich tweeted that Moore was “unfit for office” on Friday and called on the senate candidate to step aside. He then reiterated those claims in an appearance Sunday on ABC’s This Week, saying: “This is not about Obama or left wing. I just don’t believe that it is, and I’m saddened by it. I’m the father of two twin daughters, and I just think it’s inappropriate, and I would just, really would like it if he stepped aside.”

Sen. Pat Toomey (R-Pa.): After initially saying Moore should step aside if there is a “shred of truth” to the Post report, Sen. Toomey strengthened his denouncement in an appearance on Meet the Press Sunday, telling host Chuck Todd: “From my point of view, I think the accusations have more credibility than the denial. I think it would be best if Roy would just step aside.”

Rep. Peter King (R-N.Y.): “I would say unless he can prove his innocence, the burden is now on him within the next day or so, I believe he has to step down. He owes it to himself, he owes it to the state and and he owes it to the U.S. Senate,” King said on MSNBC about the allegations against Moore, as quoted by the Hill.

Sen. Rob Portman (R-Ohio): The Ohio senator called the allegations “very troubling,” according to Vox, adding, “I think if what we read is true, and people are on the record so I assume it is, then he should step aside. I think it’d be best for him, best for the state.”

Maryland Gov. Larry Hogan: Gov. Hogan denounced Moore on Twitter and called for him to “step aside,” adding: “Roy Moore’s defenders should ask themselves if they would be so quick to excuse him if the victim was their daughter or if the offender was a Democrat.”

Sen. Bill Cassidy (R-La.): Sen. Cassidy pulled his support of Moore on Saturday night, tweeting that he was pulling his endorsement “based on the allegations against Roy Moore, his response and what is known.”

Sen. Mike Lee (R-Utah): The Utah senator tweeted Friday that he could “no longer endorse [Moore’s] candidacy for the U.S. Senate.” The Hill reported that Lee has also requested that Moore remove Lee’s image from Moore’s online fundraising pitches.

Vice President Mike Pence: “The vice president found the allegations in the story disturbing and believes, if true, this would disqualify anyone from serving in office,” Pence’s press secretary, Alyssa Farah, said in a statement, according to CBS News.

President Donald Trump: “Like most Americans, the president believes we cannot allow a mere allegation, in this case one from many years ago, to destroy a person’s life,” White House press secretary Sarah Huckabee Sanders said. “The president also believes that if these allegations are true, Judge Moore will do the right thing and step aside.”

Sen. Lisa Murkowski (R-Alaska): The Alaska senator said she was “horrified” over the allegations and called on Moore to “step down immediately” — “if this is true.” Murkowski has also reportedly spoken with Moore’s primary challenger Luther Strange about a write-in campaign.

Sen. Ted Cruz (R-Texas): In a statement to the Austin American-Statesman, Cruz said: “These are serious and troubling allegations. If they are true, Judge Moore should immediately withdraw. However, we need to know the truth, and Judge Moore has the right to respond to these accusations.”

Sen. John Cornyn (R-Texas): The Texas senator said that he was trying to “sort out” the allegations against Moore and “figure out what the appropriate response is,” Politico reported, adding: “If it is true, I don’t think his candidacy is sustainable. But we believe in a presumption of innocence until proven guilty. And so I think it’s important for the facts to come out.”

Sen. David Perdue (R-Ga.): “Well, it’s early, we don’t know all the facts,” Perdue said in an interview on C-SPAN. “If they’re true, then in my opinion he should step down and withdraw from the race.”

Sen. Richard Shelby (R-Ala.): “If these allegations are true, there is no place for Roy Moore in the United States Senate,” Shelby said in a statement, according to AL.com.

Sen. Tim Scott (R-S.C.): Though Scott, who is the lone African-American Republican in the Senate, said he “didn’t know anything about Roy Moore,” according to Politico, the senator then said: “If [the allegations are] accurate, he should step aside.”

Sen. Ben Sasse (R-Neb.): Sasse called the Post story “appalling and heartbreaking,” adding: “If there’s an ounce of truth to any of this, Roy Moore has no place in public life and ought to drop out immediately. Alabamians should start thinking about who they’ll write in but it’s obvious that conservatives deserve better than this.”

Sen. Cory Gardner (R-Colo.): “The allegations against Alabama Senate candidate Roy Moore are deeply troubling,” Gardner said in a statement, Colorado Politics reported. “If these allegations are found to be true, Roy Moore must drop out of the Alabama special Senate election.”

Gardner also serves as the chairman of the National Republican Senatorial Committee, which withdrew from a joint fundraising campaign with Moore in the wake of the Post report.

Sen. Susan Collins (R-M.E.): Collins called on Moore to “immediately step aside” in a statement on Twitter — “if there is any truth at all to these horrific allegations.”

On Monday, the senator from Maine called on the Moore to withdraw from the race, citing his unconvincing denial of the allegations during an interview with Sean Hannity.

Sen. John Hoeven (R-N.D.): “The allegations against Roy Moore are very serious and if true, he should step down as a candidate for the Senate,” Hoeven tweeted Thursday.

Sen. Jerry Moran (R-Kan.): According to the Kansas City Star, Moran believes that Moore should step down if the allegations against him are true.

Sen. Pat Roberts (R-Kan.): Roberts has also stated that Moore should step down if the allegations are true, the Kansas City Star reported.