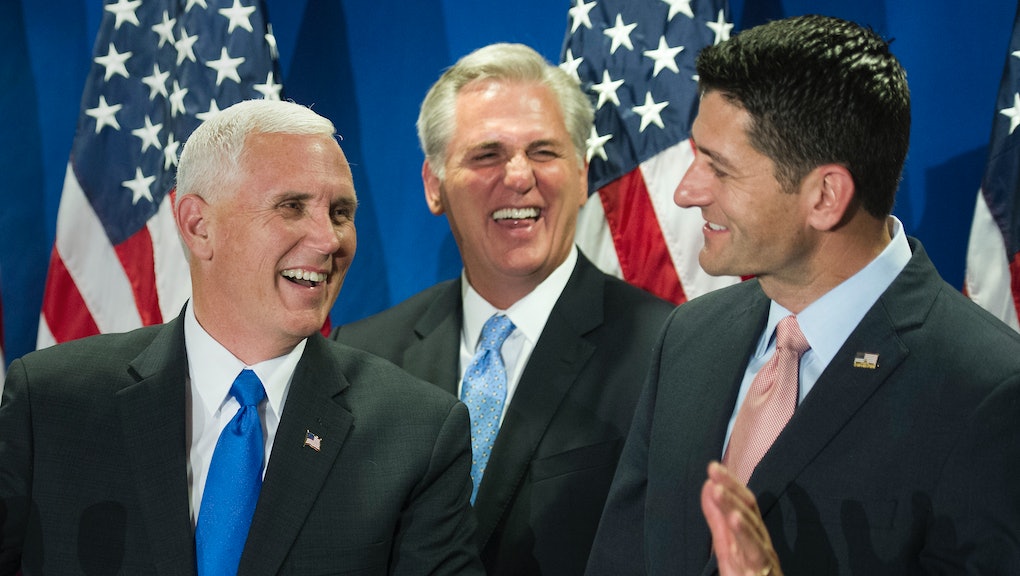 Republicans say they must pass tax reform or lose in 2018. But what if their plan is unpopular?

Republicans will again focus on tax reform this week as they come off another controversy, this time allegations of sexual assault and harassment by Alabama GOP Senate candidate Roy Moore.

Top Republicans have said passage of tax reform will be key to maintaining GOP majorities in Congress. But the question is whether passing what’s proposed in this tax plan will have much effect on voter support of Republicans in 2018.

Most voters believe this GOP tax plan favors the wealthy and corporations. In fact, it would increase taxes on many voters living in the suburban areas that rebuked Republicans on Tuesday, such as the northern Virginia counties outside Washington, D.C.

The tax plan does have a higher approval rating than President Donald Trump or congressional Republicans, with nearly half of Americans supporting it. But core changes of the plan are largely unpopular. About a third of voters support lowering the corporate tax rate or eliminating numerous deductions, including deduction of state income taxes from federal taxable income.

That unpopularity is coupled with the fact that, historically, passing tax legislation before elections hasn’t saved the GOP. President Ronald Reagan’s historic tax reform in 1986 was passed two weeks before the midterm elections — and then Democrats won eight Senate seats.

Sen. Bernie Sanders (I-Vt.) and Trump both fueled their candidacies, in part, by talking about the power of large corporations and Washington “special interests” — which are the biggest winners under these tax plans. This comes as approximately a quarter of Americans say corporate taxes should drop.

There’s no doubt passing tax reform would break the narrative that Republicans cannot move major legislation through Congress. But it’s possible this legislation will anger GOP voters in suburban areas and highly taxed states. It may further energize Democrats, while doing little to energize voters to keep Republicans in office

Today’s question: Does this tax plan make you more or less likely to vote for the GOP?

Passing tax reform: As detailed above, the House and a Senate committee are expected to pass tax bills this week. After the full Senate passes GOP tax legislation, the two chambers will negotiate a compromise package — likely the most difficult element for this bill.

Climate change: With the United States now set to be the only country not signed onto the Paris climate accord, Democratic governors, senators and others spent the weekend in Bonn, Germany, telling international leaders that major U.S. states and cities remain committed to fighting climate change.

Trump in Asia: The president’s trip in Asia wraps up early this week, and he will return to the White House on Wednesday. Trump embraced Philippine President Rodrigo Duterte, saying he “had a great relationship” with the authoritarian leader, who is accused of human rights abuses in an ongoing, violent drug war.

A trade announcement? Trump teased a “major” announcement on trade at the White House on Wednesday, his first day back from his 12-day jaunt across Asia. It’s not clear what he will announce, but it appears to be linked to his Asia trip.

Disadvantaged Democrats: As Democrats come off their high from winning elections last week, the New York Times details how difficult it will be to win many state and congressional elections next year — a result of gerrymandering and voter suppression laws.

On that note, learn more about the group that was key to Democrats nearly winning Virginia’s House.

DACA: Axios summarizes what we’ve been following for weeks about immigration. Democrats, particularly progressives, feel they have a strong position in negotiating to protect Deferred Action for Childhood Arrivals recipients in December without having to fund Trump’s border wall.

Roy Moore: The latest polling in Alabama gives Democrat Doug Jones a lead over Moore. The poll followed accounts published by the Washington Post of teenage girls saying Moore pursue them decades ago.

Here’s a running list of Republicans withdrawing their support for Moore.

Gun violence: Following mass shootings in Las Vegas and Texas, gun control advocates have extracted no concrete concessions from Congress, Now, they’re hoping a lawsuit against gun manufacturers by families of victims of the Newtown, Connecticut, shooting will lead to a breakthrough.

ICYMI: Trump tweeted that North Korean leader Kim Jong Un is “short and fat.” It was one of Trump’s most engaged-with tweets this year.

Trump also said over the weekend he believed Russian President Vladimir Putin when he said Russians “did not meddle” in the 2016 presidential election. He later, sort of, walked that back — saying he trusted U.S. intelligence agencies that have said Russian did influence the election.

“If there’s one good thing Donald Trump has ever done, it has been taking women like me from the sidelines. Saying, ‘No more. I will not wait.’ And rising to the challenge of running for office.” Tap or click the video below to watch.