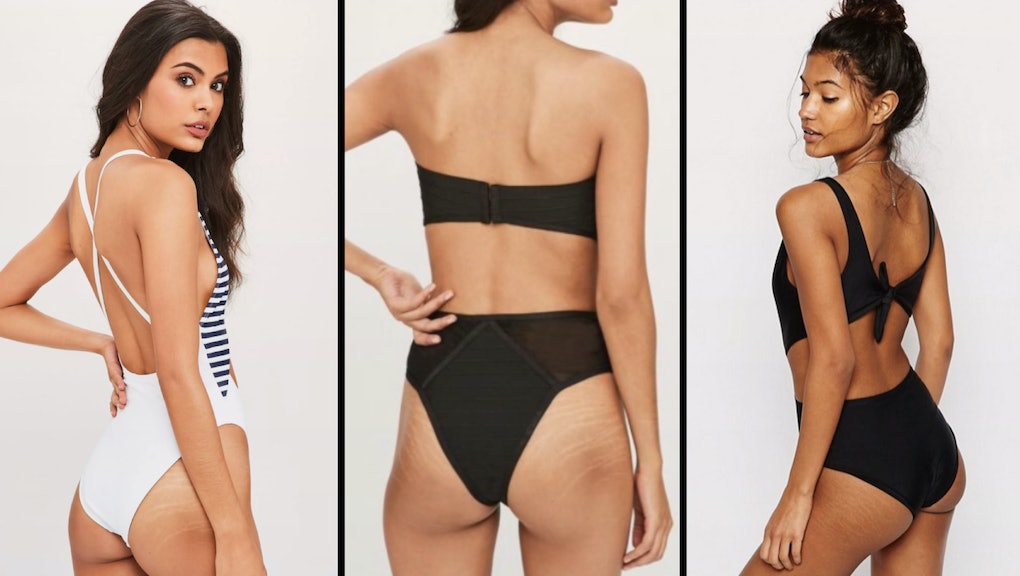 On Wednesday, another brand came to its senses about stretch marks.

The brand Missguided, known for its trendy going-out dresses, became the latest brand to show images of its models with stretch marks, meaning that the brand had stopped editing them out.

As usual, people were super jazzed about this, with multiple media outlets hopping on this story. And we’ll be honest — at first glance, we thought about doing the same.

“As a brand, we feel we have a strong sense of social responsibility to support young women and inspire confidence,” Missguided said in a statement to outlets. “So we’re on a mission to do just that by showing our audience it’s OK to be yourself, embrace your ‘flaws,’ celebrate individuality and not strive for what the world perceives as perfection. Because basically, it doesn’t exist. By showing imagery that’s real and authentic, we want to show it’s more than OK to be yourself.”

Missguided has completely denied these allegations, releasing a statement reading: “Our aim is to inspire body positivity, so our policy is to not Photoshop out what are generally perceived as ‘flaws.’ Photoshopping them on would negate our message, which is all about celebrating who you are and not striving for unrealistic perfection.”

And that’s certainly very true. It would be incredibly odd for a brand to draw stretch marks on its own models. Like, that probably didn’t happen.

But we have an idea that would make this weird controversy — and any other like it — disappear. Let’s stop falling head over heels in praise of retailers and brands that don’t edit stretch marks from its models’ bodies.

We at Mic have been guilty of praising retailers that do this ourselves. When the swimwear brand Rheya Swim, Lane Bryant, Target and Asos all posted images of models with stretch marks, we wrote stories praising the move.

But now we feel like we’re at a watershed moment. If we keep on praising moves like this, then it will continue to feel as though stretch marks on models aren’t normal, when they are. Stretch marks are an entirely normal, regular thing for human beings to have. It’s not a big deal. It’s also really not a big deal for most of these retailers because in most of these cases, we’re seeing stretch marks unedited on very thin models.

Target and Lane Bryant are the outliers in this, but still, we’re talking about very minimal stretch marks being seen. This is the bare minimum.

What we’re hoping is that by not drawing too much attention to these brands, then maybe other brands and designers will stop editing their models not because they want the press attention (which they’ve been getting, without fail), but because they really want to show women as they are.

That’s what we’re really trying to create here. We want to create a world in which fashion brands and designers are naturally flocking to more realistic, unedited images of models, press attention and hype aside.

Will this work? Only time will tell.