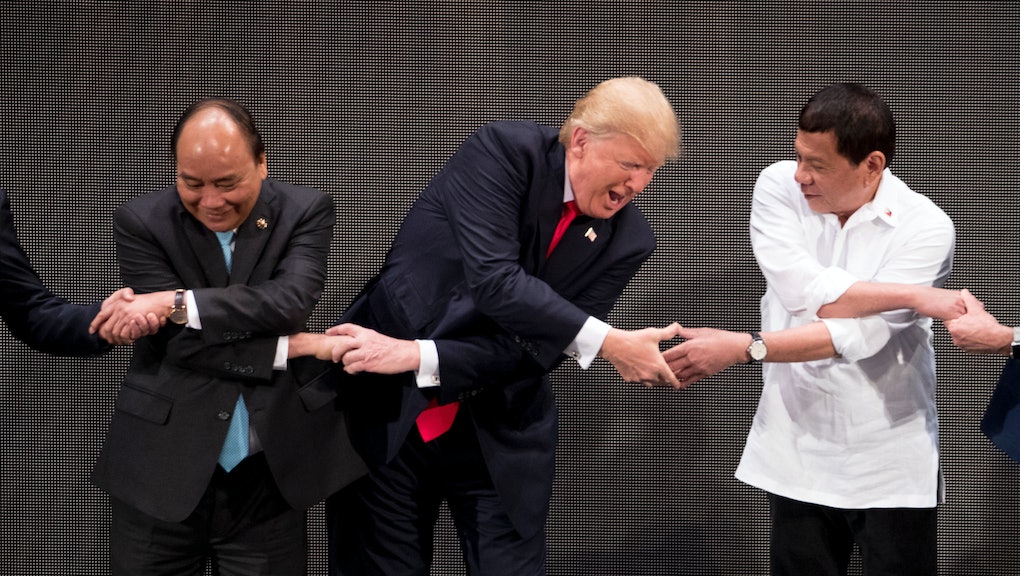 President Donald Trump on Monday is wrapping up his 12-day trip through Asia, a tour in which he fell into myriad traps and created even more problems for his already beleaguered administration.

The goal of the trip, according to the White House, was to “[strengthen] international resolve to denuclearize North Korea, [promote] a free and open Indo-Pacific region, and [advance] American prosperity through fair and reciprocal trade.”

Trump instead received a host of negative headlines for his own behavior, and even saw the United States get shut out of a trade deal that could hurt its economy, experts told the Financial Times.

The problems began in China, a few days into his stint abroad.

Trump allowed Chinese President Xi Jinping to avoid press scrutiny by agreeing to block reporters from asking questions during a joint appearance at the insistence of the Chinese. That eschewed a bipartisan tradition from past presidents — including Bill Clinton and George W. Bush — to force Chinese leaders into facing the media.

“The Chinese try this every time,” Jay Carney, who served as press secretary under former President Barack Obama, tweeted of Chinese attempts to avoid reporter questions. “It’s a test of will and principle. Letting them dictate press access is an embarrassing capitulation.”

Trump also dropped much of the tough talk against China, a recurring element of his campaign, when meeting face to face with Chinese leaders. In the past, Trump had criticized Obama for not labeling the nation a currency manipulator, and said the U.S. allowed China to “rape our country.”

Trump, on his first trip to the nation as president, also did not label China a currency manipulator. And he said he doesn’t blame China for what he has called unfair trade practices, instead saying he gives them “great credit” for taking advantage of the U.S.

“After all, who can blame a country for being able to take advantage of another country for benefit of their citizens? I give China great credit,” he said.

It was here where Trump met with Russian President Vladimir Putin — away from the eyes of the media, who were largely blocked from the APEC CEO Summit that the two presidents and other world leaders were attending.

And he again suggested he believed Putin’s denials about Russia’s meddling in the 2016 U.S. presidential election over his own intelligence community’s assessment.

Trump also attacked those who were aghast by his decision to take Putin’s side over his own country’s intelligence community, tweeting, “When will all the haters and fools out there realize that having a good relationship with Russia is a good thing, not a bad thing.”

“Why would Kim Jong Un insult me by calling me ‘old,’ when I would NEVER call him ‘short and fat?’” Trump tweeted. “Oh well, I try so hard to be his friend — and maybe someday that will happen!”

Getting other Asian countries to help convince Kim to not launch nuclear missiles was a major part of his trip.

Then came his final stop in the Philippines, where some were wondering whether Trump would confront Filipino President Rodrigo Duterte for his human rights abuses, which includes extrajudicial killings of suspected criminals, drug addicts and journalists.

Trump didn’t publicly criticize Duterte, though, and instead laughed at Duterte for calling reporters “spies” and blocking their questions on human rights.

While the White House says “human rights briefly came up” in Trump and Duterte’s private talks, Duterte’s camp disputes that the topic was discussed.

Finally, on top of all the other negative headlines, Trump saw the U.S. get shut out of the Trans-Pacific Partnership trade deal, which many assumed to be dead after Trump withdrew from it in January. The TPP, agreed to by 11 countries, is likely to strengthen China’s economic position in the world, experts told the Financial Times.