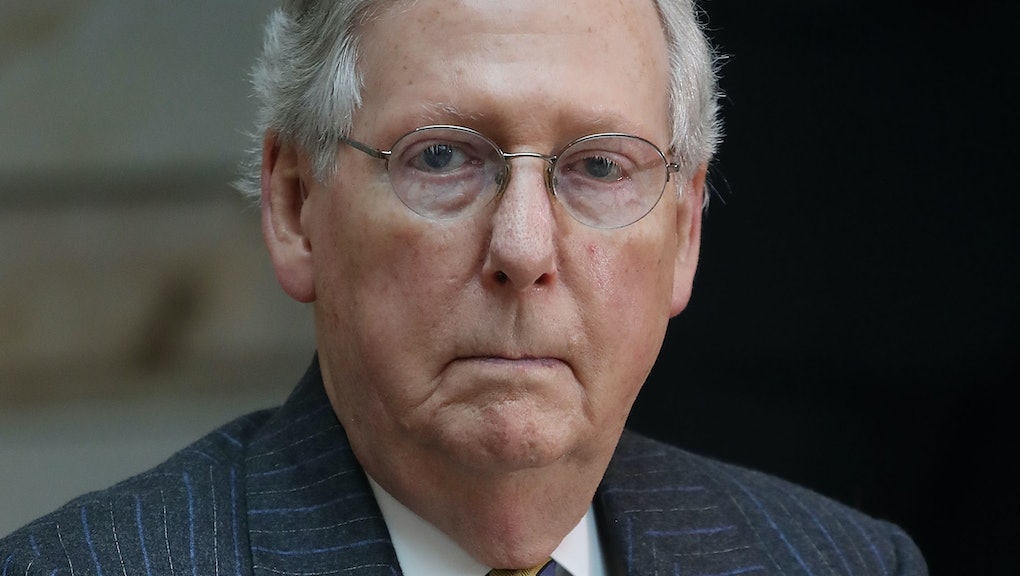 Senate Majority Leader Mitch McConnell stated without equivocation on Monday morning that he believes the multiple women who have accused Roy Moore of sexual misconduct, after he had initially hedged his rebuke of the Alabama Republican Senate candidate.

“I believe the women,” McConnell said while taking questions at a Louisville, Kentucky, press conference on the Republican tax reform effort.

McConnell added that he thinks Moore should step aside in the race for Attorney General Jeff Sessions’ former Senate seat, and added that Republicans are exploring propping up a write-in campaign for another GOP candidate.

On Thursday, the Washington Post published a story alleging that Moore molested a 14-year old girl when he was in his thirties, and that in the past he pursued relationships with other teenage girls. In the immediate aftermath of the story, many members of Moore’s own party admonished the candidate.

As with many other Republicans, McConnell’s initial response to the story offered a conditional condemnation of Moore.

“If these allegations are true, he must step aside,” McConnell said Thursday.

The bombshell allegations in the article are casting a long shadow over the looming election: By Friday, one poll showed that Moore, the former frontrunner in the deep red state of Alabama, had lost his lead against Democratic Senate candidate Doug Jones.

Moore issued an anemic denial of the Post’s story, maintaining that he didn’t “generally” date teenage girls when he was in his thirties. On Sunday night, Moore told a crowd at a Huntsville, Alabama, gym that he plans to file a lawsuit over Post’s report, calling it “fake news” and “a desperate attempt to stop my political campaign.”

In a mailer to press on Monday morning, high-powered civil rights attorney Gloria Allred said she will be holding a press conference on Monday afternoon with a new person accusing Moore of sexual misconduct.