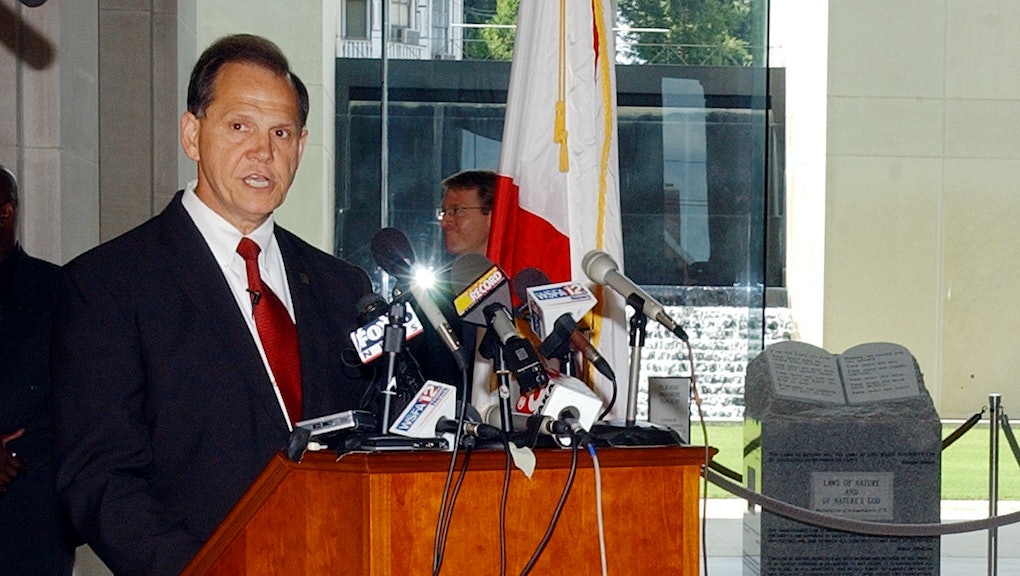 Roy Moore built his political career on beating the establishment. This time is no different.

Roy Moore’s career has been defined by opposing the status quo.

In the 1980s, he started hanging a wooden plaque of the Ten Commandments in his law office in the northeastern Alabama city of Gadsden. Moore would go on to hang that plaque in a state district courtroom in the 1990s, which led to a lawsuit from the American Civil Liberties Union.

When he was elected chief justice of the Alabama Supreme Court, Moore had a stone monument of the Ten Commandments erected in the state courthouse. That led to his dismissal from the bench in 2003. Elected to the same position again in 2012, Moore was suspended in 2016 for refusing to comply with the U.S. Supreme Court’s same-sex marriage ruling.

Bucking the establishment even further, Moore managed to beat Alabama Sen. Luther Strange — who had been backed by President Donald Trump — in the Republican primary election earlier this year.

But this rabble-rouser is now facing an unprecedented level of opposition.

A fifth accuser of sexual misconduct against Moore came forward on Monday, alleging in a press conference that Moore molested her in her car after she agreed to let him give her a ride home. Beverly Young Nelson also showed Moore’s signature in her 1977 high school yearbook — one that appears similar to Moore’s signature from earlier this year.

As that news broke, top Republicans were already distancing themselves from Moore to a historic degree. Senate Majority Leader Mitch McConnell (R-Ky.) said, “I believe the women” and called on Moore to drop out of the race. Sen. Cory Gardner (R-Colo.), who leads fundraising for the Senate GOP, said Moore should be expelled from the Senate if he is elected.

No senator has been expelled since the Civil War. Fourteen of the 15 senators who have been removed lost their seats because of their support for the Confederacy; the one expulsion came before 1800.

A new poll says a majority of Americans believe Moore should drop out of the race.

But the polling is mixed on whether Moore is in trouble. Some surveys still show him ahead while others show his Democratic opponent surging.

And locals are standing with the Senate candidate. More than 50 pastors wrote a letter of support for Moore and Alabama GOP officials have expressed their support as well.

Remember: Moore is used to controversy and employing it to his political gain. So far, he’s made no indication he will drop out of the Senate race — and has doubled down with attacks on McConnell and the media.

Trump Jr. and WikiLeaks: The open-government website that posted hacked emails of Democratic officials during the 2016 presidential campaign messaged Donald Trump Jr. several times on Twitter. Trump Jr. largely did not respond, but it appears Trump Jr. and his father may have acted on tips from the WikiLeaks account.

Another special counsel? Attorney General Jeff Sessions is considering appointing a special counsel to investigate the selling of Uranium One to a company tied to the Russian government.

The move is seen by some as a distraction from the investigation into alleged Trump-Russia collusion. Republican senators told Mic recently that a special counsel should be considered.

HHS nominee: A longtime drug industry insider is Trump’s nominee to become secretary of the U.S. Department of Health and Human Services: Alex Azar, former president of Eli Lilly and board member of a pharmaceutical lobby. Trump said Azar will lower drug prices — even though that is not what he’s done throughout his career.

Menendez jury deadlocked: A mistrial looms in the case of Sen. Bob Menendez (D-N.J.) after the jury told the judge on Monday they are deadlocked. The judge ordered the jury to begin deliberations again Tuesday.

Opioid advocacy: A new grassroots coalition launched Monday to demand $45 billion from the federal government to combat the opioid epidemic.

War in Yemen: The House declared America’s role in the Saudi Arabian-led war in Yemen unauthorized on Monday. It’s a step toward Congress reassuming its war-making authority.

Volcker Rule: Republicans and some moderate Democrats announced a bipartisan deal to roll back regulations on the American banking industry. One change: The Volcker Rule would end for banks with less than $10 billion in assets. The rule was enacted as part of 2010 financial reforms to prevent banks from making risky bets that could hurt customers.

America divided: New Pew research showsa> the median Democrat and median Republican are far more divided now than they were 20 years ago. In fact, liberals and conservatives don’t even want to live near each other.

Hate crimes: Attacks motivated “by bias against blacks, Jews, Muslims and LGBT people” rose for the second year in a row in 2016, the Associated Press reported.

ICYMI: Plugging this video again because it is incredible. Tap or click the video below to watch.