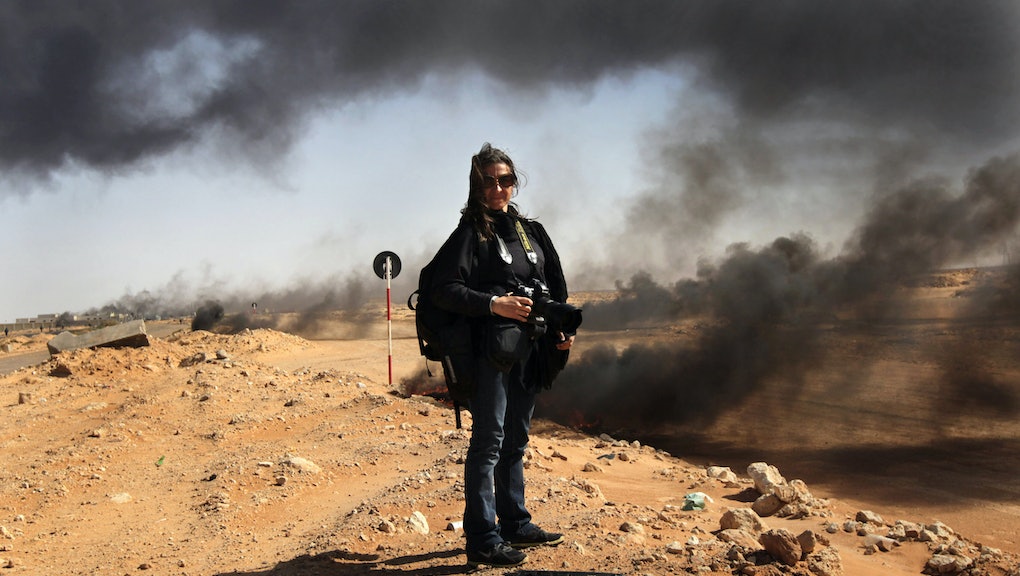 Rules of the Road: Photojournalist Lynsey Addario on traveling to war zones while pregnant

Lynsey Addario is the rare female photojournalist who specializes in conflict zones. She’s won a MacArthur Fellowship and a Pulitzer Prize, and her memoir, It’s What I Do was a New York Times bestseller. Steven Spielberg is directing a movie version of the book, and Jennifer Lawrence will portray Addario. At the International Center of Photography Spotlights in Manhattan earlier in November, Addario talked with Katie Couric about car bombs, kidnappings and working in South Sudan while eight months pregnant. Mic sat down with her afterward.

Mic: What are the things you always travel with?

Lynsey Addario: To cover war, or to be a journalist?

LA: Protein bars — my protein bar of choice is Quest bar, the Oreo cookie. Headlamp. Those Mophie extra phone chargers — two of them, one thinner, one thicker one. A power inverter, so you can charge things in your car. I always bring my running clothes. Good hiking boots. If it’s combat, then obviously you need your protective gear.

For running clothes, do you have some that are universally acceptable?

LA: If I’m in a Muslim country, where women don’t run outside, I’ll work out in my hotel room. So I put P90X on my iPad and that’s what I’ll do. I always work out, but I have to modify based on where I am.

What about for regular travel?

LA: I don’t ever really ‘regular travel’! For example, I was shooting for National Geographic last weekend in Houston, and then here I’m doing an event like this, I also have a book party to go to and an event. So I need dresses. And then I have meetings in the day, so it’s like three different sets of clothes.

I noticed [during the talk] you took a pass on the sexual harassment question.

LA: I just think there’s more discrimination than harassment. There is harassment, but that’s not… at the end of the day there have to be more editors who assign women, and promote them the way they promote men.

I was just on the West Coast doing a story, and my shooter is pregnant and she hasn’t told anyone. She was absolutely sure it would affect her career.

LA: And it will. The reason why I went through six months of pregnancy without saying a word was because I was sure that editors would start making decisions on my behalf.

Which they do even when you’re not pregnant.

LA: And they do after you have a child — suddenly, I can’t get assignments to cover war because I’m a mother. It’s like, wait a minute — that’s my decision, not yours. So I think that yes, there is discrimination. It’s 2017, it’s very frustrating. There’s a woman, Daniella Zalcman, who’s been collecting statistics on women in photojournalism and it’s astonishing.

I was at Reuters during 9/11. The war team came in and I remember a female colleague passing me a note: ‘Could they be a more macho group of guys?’

LA: It’s hard to answer that because the movie hasn’t gone into production yet. At this point, the script has been written, and I’ve been spending time with Jennifer Lawrence now for almost two years. She’s hilarious and amazing and so smart and fun and easy to hang out with — I just feel like I’m hanging out with a girlfriend. I haven’t really gotten my head around that yet, in the sense that it’s more about her studying me and getting to know me. And that’s weird, obviously. Reading about how the book is being condensed into two hours. They have to morph characters and change things because it has to fit.

That’s obviously very strange, because my instinct as a journalist is to be like, “Wait, that didn’t happen like that exactly!” But it’s not a documentary. My philosophy in doing all this was, ‘Look, it’ll be amazing if the issues I care about get out to a greater audience,’ and also the fact that the world doesn’t really see women in this role. I think it’s really important. I also think it’s important for younger women to have someone to identify with.

Did they Hollywood-ize it at all or did you have final say?

LA: I don’t have veto power at all — nor do I want it. I feel like I chose some of the best people in the business and I have to trust their instincts. If I go to cover a war, I’d be really annoyed if my editor was constantly telling me how to shoot. It is a Hollywood movie, so it’s obviously going to have some element of that, but I think it stayed pretty true to the characters.

I didn’t realize that you aren’t tall until you made a point of saying that — I just assumed. [Addario is 5’1”.]

LA: A lot of people do, and they also assume I’m going to be not at all feminine because I’m super tough, but no.

LA: When I picked a dress this morning for this, my sort-of roommate in New York looked at me and said, “I love that you do this for our image.” Because she also covered war, and she’s like, “The girlier you get the better, it’s great for all of us.” And it’s true — I want people to be like wait, she’s tiny and wears big heels. Because I don’t want that same image of a war photographer, I want to mix it up.

Is it hard to get dressed up or is it fun?

LA: It’s fun! Because I never get to dress like a girl. I always have to dress in cargo pants and big clothes and things like that, so I love actually getting to be a woman.

If there’s one misconception about you, what is it?

LA: I don’t know the misconceptions about me because I don’t know how people perceive me, I feel like all I do is work. I think the misconception about war photographers is that we’re all adrenaline junkies and we just do it for the thrill and the rush. That misconception is one I address throughout the book because I do not feel that way at all. I really believe in telling these stories and giving people voice and presenting a different side of the story.

That idea of the adrenaline junkie annoys me. Of course there are people who do it because they’ve been doing it so long they’re addicted to the adrenaline. It is difficult to pull back and it’s very hard, but I think there’s more to it.

When you’re out on a story, is there a breaking point where ‘enough is enough, I need to go home’ or does it depend on the story?

LA: It was definitely different before I had a child, because I would basically just stay in the field until I couldn’t see straight, where I was like, I need to step back so I can have a fresh perspective. But now I usually cap it at two weeks, because I need to get home. I’m a little psychotic when I’m shooting in that I shoot pretty much 17-hour days, so I pack two days into one.

What’s one thing you miss most when you’re away in the field?

LA: Just being home, and the monotony of daily life. Being able to make my own coffee is something I miss so much. Seeing my son, my husband, being able to sleep past sunrise. It’s just those little comforts.