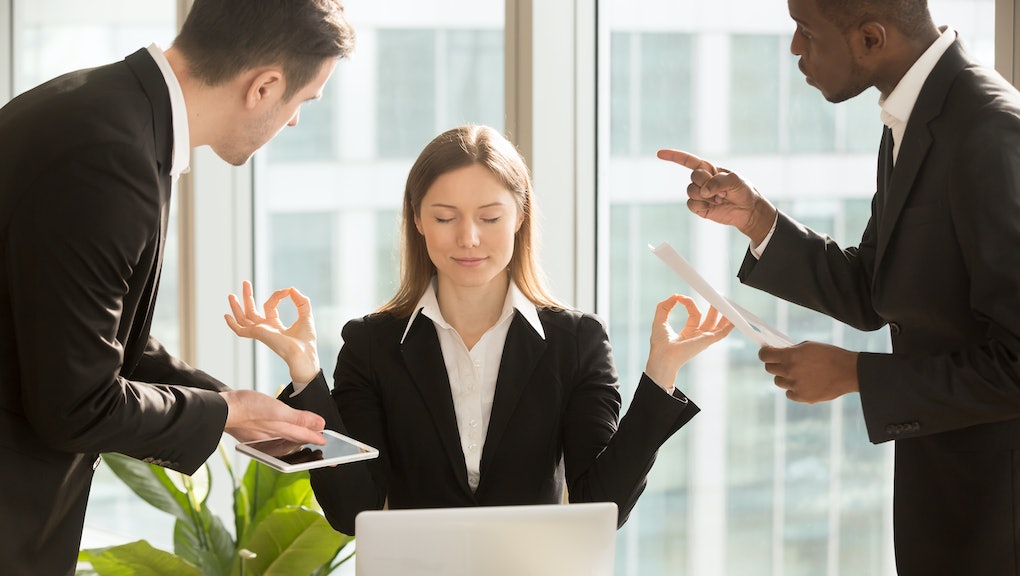 Whether you’re aiming to get a promotion or raise, or simply trying to dazzle at a new job, attempting to impress your boss can backfire. You might, for example, avoid using vacation days — so everyone sees how hard you work — despite research findings that suggest people who use time off tend to earn more money, not less. And while you might think saying yes to every assignment that comes across your desk will make you seem like a trooper, doing so can also come back to bite you: beyond just burning you out.

How so? One clue comes from a new study suggesting that how your boss perceives your packed workweeks — and your worthiness of a promotion — depends on their view of stress as good or bad. That’s according to a paper from researchers at the Tel Aviv University in Israel. The paper’s lead author said their findings complicate a number of popular, viral studies suggesting we should all harness the power of stress for good.

“We basically project our experience on others, and we are not identical,” said professor Sharon Toker of TAU’s Coller School of Management. “People who are in higher positions with more status have a harder time acknowledging their employees’ difficulties, and that’s a problem.”

Indeed, how we feel about stress has real-world ramifications: If a boss thinks stress is good — which Toker calls a “positive stress mindset” — then they might be more likely to promote people they view as dealing well with tough workloads. But they are also less likely to offer employees who are quietly struggling the help that the really need. (Meanwhile, those who see stress as a negative may offer help — but might not be as giving with promotions.)

What affects perceptions of stress?

Where does the disconnect come from? Reports touting the benefits of stress fuzz an important distinction between what’s good for us and what makes us more productive, Toker said. Distinguishing between good and bad stress may help us delineate between possibly necessary stressors — like deadlines — and less productive stressors, like workplace politics or ambiguous job roles. Yet, either way, all of these stressors are bad for our health in the long run.

Her research on about the health effects of stress — coupled with media coverage of stress’ benefits — inspired her to look into whether or not the way we perceive stress affects how we recognize the symptoms in others.

To test a hypothesis that people project views of stress onto others, Toker and her team conducted a series of four studies with groups ranging from 150 to 400 employees from both the United States and Israel. In all the experiments, workers listened to a description of a fictitious worker named “Ben.”

Ben was a pretty busy guy, the subjects were told: 10 hours in the office before doing more work at home; between 100 and 200 emails a day; 12 people reporting to him and a 13-year old with a birthday coming up. The researchers didn’t say that Ben was stressed, per se; they just described his day-to-day life and then asked respondents to evaluate whether they thought Ben was burned out or if he deserved a promotion.

Meanwhile, the other group was asked to recall stress affecting them in a negative or debilitating way, and describe feelings, thoughts, behaviors, and physical sensations.

What the authors found was that the more positive someone was primed to feel about stress, the more likely they were to put a positive spin on Ben’s stress as well: That Ben wasn’t burned out at all, and as a result he was more likely to deserve a promotion. Those who were primed to have a more negative outlook on stress were more likely to think Ben needed help.

How to make your work life less stressful

So what can we actually do about all this miscommunication? Toker says people should able to talk more openly about stress levels — and managers need to better understand that employees all experience stress in different ways. “We need to be more concerned with the wellbeing of employees than we are right now,” she said. “If the media focuses on the potential effect of [positive] stressors, then of course that’s great for companies. They can set many goals and just increase the overload, because, hey, it helps performance. But if you look at the long term effects [on individuals], it’s bad.”

So if you’re a boss, you might consider leaning into your inner beta by working on those active listening skills — or by trying to put yourself in your employees’ shoes every once in awhile.

If you’re an employee trying to get more breathing room, you might be more proactive about asking for time off, giving lots of advance notice and enlisting co-workers to cover for you.

To improve your day-to-day, don’t be afraid to use a bit of levity — or to “manage up,” so you can get ahead of stressful spells: If you know your boss always becomes frantic around year-end, you might surprise them with an organized memo planning out projects for the month. And never underestimate the value of reaching out to simply say, “Hey, is there anything I can help you with today? You seem busy, and I’d be happy to help.”

By offering to help during easier periods, you could buy yourself more flexibility when your workload becomes unwieldy.

Finally, check out our guides on how you can improve your own work-life balance to set yourself up for long-term success. You likely have more leverage than you realize to negotiate for better hours or better pay.