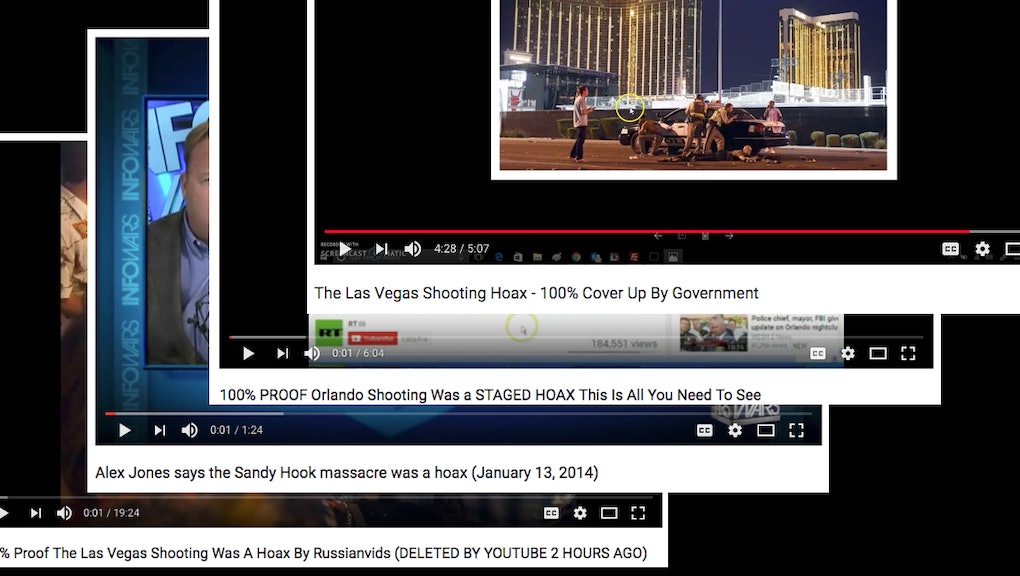 The science behind why people doubt terrorist attacks happened

After every terrorist attack or mass shooting, YouTube is immediately filled with videos claiming to prove the violent act was a hoax perpetrated by the media or the government.

From Sandy Hook to 9/11 to the October attack in New York City, conspiracy theorists have an explanation for everything. The videos calling out supposed hoaxes are so prevalent that YouTube reportedly changed its algorithm to better promote legitimate news.

But why are people making these videos? What makes these conspiracy theories so popular? We spoke to psychiatrist and psychoanalyst Dr. Gail Saltz about conspiracy theorists and the rising obsession with “fake news.”

“I think that the whole conspiracy idea of ‘fake news’ is just the latest iteration of conspiracy theory,” Saltz said. “Who are these people? They’re mostly anti-authoritarian people. ... They’re often insecure people. They often have lower self-esteem, and they are often made afraid by the things that make all of us afraid, but their way of dealing with that ... is to try to come up with something that makes scary things make sense.”

The internet has made conspiracy theories more contagious. “It’s made it that you can reach other people who are like-minded, even if the like-mindedness is, ‘How do we explain this irrational, noncontrollable world in a way that feels comfortable and controllable to us?’” Saltz said.

People who believe in conspiracy theories aren’t necessarily mentally ill, though. “Many people who do not have any psychiatric illness at all fit this,” Saltz said. “So you want to be careful about saying, ‘Wow, that’s crazy,’ and being very pejorative about it.”

Not all conspiracy theories are completely without merit. There’s occasionally a small grain of truth to the things people are most paranoid about.

“We have had conspiracies in history,” Saltz said. “And that makes it much more believable, potentially to anybody.”