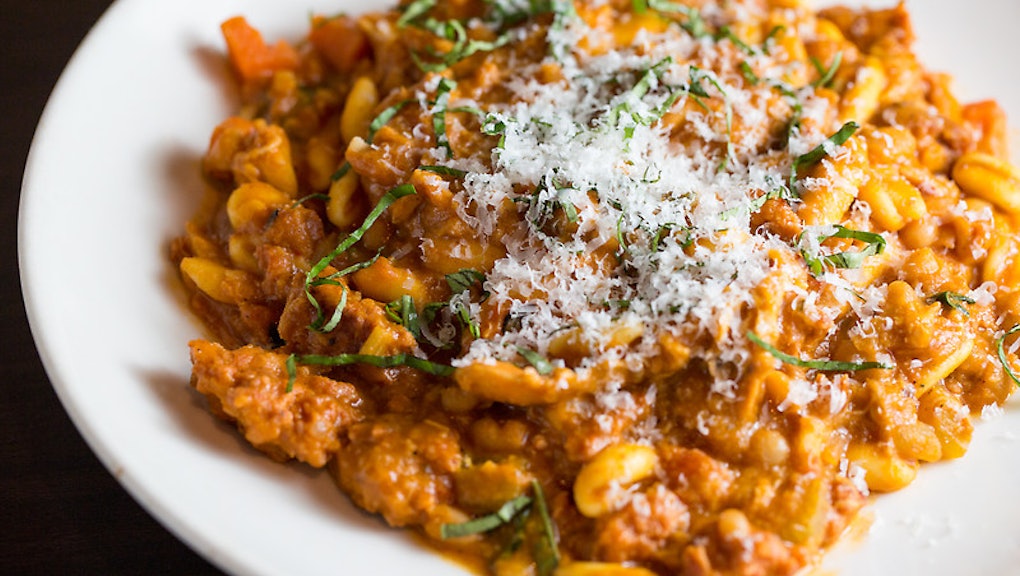 Why this chef is dedicated to serving alligator

The American alligator has remained nearly untouched by evolution for the last 8 million years. It has hunted in the Southeastern wetlands as an apex predator, less affected than other native creatures by sea levels or fluctuating temperatures. Nearly hunted to extinction by 1950, alligators were one of the first protected species in 1962. They helped usher in the creation of the Endangered Species Preservation Act in 1966 and by 1987, the alligator had become a rousing success story, pronounced fully recovered. With healthy levels returned, they demonstrated the program’s effectiveness and future promise.

Today, in some parts of Louisiana, the American alligator’s story is experiencing another plot twist: It’s seeing a revival in upscale restaurants.

Chef Nathan Richard of Cavan in New Orleans is both passionate and creative when it comes to cooking alligator — he’s done nose-to-tail preparations and hosted a vanishing wetlands supper series. For Richard, normalizing this protein on menus again is one means to protecting the Louisiana wetlands.

During a visit to his restaurant, we tucked into a bowl of his incredible curry piquant. Fried alligator tenderloin was slathered in a coconut sauce, made from hot red curry, fish sauce, soy, sliced ginger and gochujang paste. It was fragrant and spicy, bringing both moments of classic Louisiana flavor with intense notes of Southeast Asian cuisine. A perfectly crackled exterior resembled fried chicken, but the meat within was more akin in consistency to a super-tender octopus.

While Richard is not the only man cooking gator in New Orleans, he’s likely one of the few chefs of his caliber with such a hands-on approach to the animal in the wild.

“I’ve been hunting alligator since I was a kid growing up in Thibodaux, Louisiana,” he said. “Alligator is not only high-protein and low-fat, it’s also able to be sustainably sourced. The way we trap them, there’s no pain or stress until the moment it’s killed. If you do it right, it’s very, very fast.”

“If you hunt alligator wrong, you’re in big trouble,” he said with a laugh. The sound fits his massive frame — when he’s not hunting gator, Richards is a volunteer fireman.

His exploration of new ways to cook alligator continues to excite guests who’ve come to love the meat. It’s far beyond fried alligator bites in a basket — a common sight in the city.

“I learned from Australian crocodile recipes that you can do a baby-back ribs,” he said. “When I worked at Kingfish, I hosted nose-to-tail dinners. For those, I broke down an entire alligator and prepared each part differently. The cheek is delicious, but the liver is totally inedible.” His grits and alligator grillades arrived on the Cavan menu this winter, with pan-fried cutlets cooked in bacon fat and braised in a reduction of celery, onions, bell pepper and garlic — served over stone-ground, mascarpone and edam cheese grits.

I was eager to get a more up-close-and-personal look at the wetlands, and, admittedly, at the alligators. It turns out a lot of people are similarly inclined and hunting (with professionals) is now a tourism activity.

Richard has become friends with a biologist and conservationist, Ray J. Matherne, the owner of Cypress Point — 1,700 acres of wetland about 30 minutes from New Orleans in Bayou Des Allemands. Matherne has a Masters in environmental science from Loyola University and a doctorate in science education from the University of Southern Mississippi. Today he takes guests on tours and crawfish harvests. In September — the only month alligator hunting is legal — he’ll even take guests on two-day alligator hunts. There’s no place to stay directly on his property, but the drive isn’t too long from New Orleans. Matherne said he believes Cypress Point is over-populated by alligators, and he believes hunting the animals is necessary to control population.

But according to the National Wildlife Federation, alligator over-population is not a problem. “The rebound of the alligator populations is a conservation success story,” Samantha Carter, the senior outreach coordinator for the National Wildlife Federation, said in an email. “I am not sure anyone would say that they are overabundant or over-populated.”

For Carter, coastal restoration is the priority “because it will protect the freshwater habitat that alligators live in.” Bringing exposure to the issues of the wetlands through the return of the American alligator as a normalized protein, as well as tourism activities and wetland-focused dinners, could help.

Matherne’s preserve has Spanish moss dripping dreamily off cypress, gum and oak trees. It’s easy to forget we are here for a hunt, as the first day is rather relaxing. We set traps using 12-foot long willow poles with a long, nylon rope tied to both ends. The poles are planted at a 45-degree angle deep into the mud. On the top of each pole, a piece of raw chicken hangs from a massive, metal hook dangling about a foot off the water.

The alligators begin their own hunt at dusk. Sniffing the rotten meat, they burst from the water to swallow the it whole, settling on the mud below to digest — without noticing that they’ve swallowed a hook and line, too.

“Let’s say we never came back,” said Matherne on the second day of our hunt. “It would do them no harm. An alligator’s digestive system is so acidic, it’s strong enough to dissolve a hubcap. In a matter of days, it would all dissolve, and the alligator would swim away.”

A missing chicken alerts us we might have a gator. Richard stands in the boat, hauling the pole and line upward. Another hunter stands alongside him with a rifle pointed at the water. It’s mere seconds before an 11-foot alligator rises to the surface, suddenly furious and thrashing. The water is boiling and the boats are rocking with considerable force. Birds go screaming from the tree canopy. If you need anything to hunt an alligator, I realize, it’s an incredible trifecta of balance, bravery and marksmanship, since falling in would likely mean death. A quick bullet is fired into the center of alligator’s the head, and just like that, the swamp goes quiet again.

After hunting, we drive the gators in trucks to a licensed processor in Des Allemands. “I’m certainly not the only chef working with it in New Orleans,” said Richard. “I’d suggest dining at Pêche, where chef Ryan Prewitt uses alligator from time to time. I’d really love to see alligator go from being something people feel adventurous eating to something they feel normal eating again.”

Jan. 23, 2018, 5:22 p.m.: This article has been updated to remove inaccurate information regarding the population of alligator in the Louisiana wetlands. As Snopes and others pointed out after this article’s publication, the state of Louisiana does not currently consider the alligator to be over-populated. Additionally, this article has been updated to include comment from Samantha Carter of the National Wildlife Foundation.