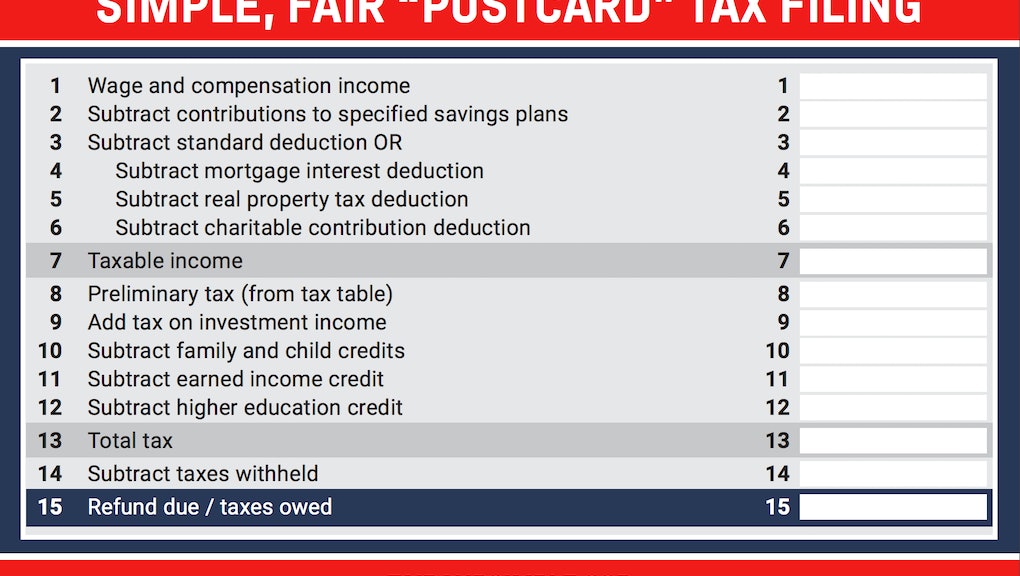 Tax Reform: This is the one big problem with the Republican tax “postcard” plan

House Republicans love to tout the idea that their tax reform plan will make filing your taxes so easy you can do it all on what they call a “Simple, Fair ‘postcard’” — the same postcard President Donald Trump can be seen kissing in a video from Nov. 2.

“You can file your taxes, I’m going to bring a couple props out, literally on a postcard,” House Speaker Paul Ryan said this week at a town hall, showing off the small piece of paper he says 90% of Americans will be able to use to file their taxes if Republicans have their way.

But there’s just one problem with the GOP’s postcard — a key selling point of their tax plan, which passed by 227 to 205 in the House Thursday.

The postcard is merely a stylized version of the 1040EZ tax form many Americans currently use to do their taxes: just with less white space and fewer instructions.

And while it’s true the postcard may reduce complexity for some, it’s not for a great reason. The GOP plan gets rid of personal exemptions and key deductions — which many taxpayers use to lower their bill.

“This is a pretty big misdirection,” said Jacob Leibenluft, a former Treasury Department official and a senior advisor at the Center on Budget and Policy Priorities. “People want a simpler tax code, but ultimately they care most about what they’re paying.”

Crucially, the postcard (and plan underlying it) might actually make filing even harder than it is today for certain taxpayers, said Joseph Bankman, a professor of tax law and psychology at Stanford University and a proponent of making filing taxes easier.

“It is a wash on simplification,” Bankman said. For some, in fact, “it will greatly increase complexity... as they struggle to understand the lower tax rate on individual business income and try to rearrange the way they do business to qualify for that low rate.”

Let’s take a closer look at the postcard, which Rep. Phil Roe (R-Tenn.), posted on Wednesday.

The postcard gets complicated from the very first line: It says to report your “wage and compensation income” — but gives no instructions about where to find that information.

The 1040EZ says directly where to find that number.

The postcard doesn’t get any easier from there. The very next line says to “subtract contributions to specified savings plans.”

What are those savings plans? The postcard doesn’t tell you.

The postcard then tells you to either subtract the standard deduction, or move on to itemize your deduction.

But unlike the current 1040EZ, the postcard doesn’t tell you what the standard deduction is, so unless you have memorized that amount you’d again have to go searching.

Importantly, the postcard is also missing crucial elements that make the current tax form longer — basics like space to write your name, address and Social Security number, which are clearly essential if you are filing your taxes.

Are you supposed to scribble your SSN and other identifying information on the back and just mail it in? Unclear. Presumably you would want to use an envelope — given the very serious and real risk of tax identity theft and fraud.

And if you are an entrepreneur or run a mom and pop shop? Good luck having an easier time: “There’s never been a version of this plan that simplifies the most complicated elements of the tax code, especially if you’re a small business,” Leibenluft said.

As it happens, the postcard marketing campaign doesn’t seem to be working on the public: A majority of voters disapprove of the plan, according to a Quinnipiac poll published Wednesday.

James Dennin contributed to this report.