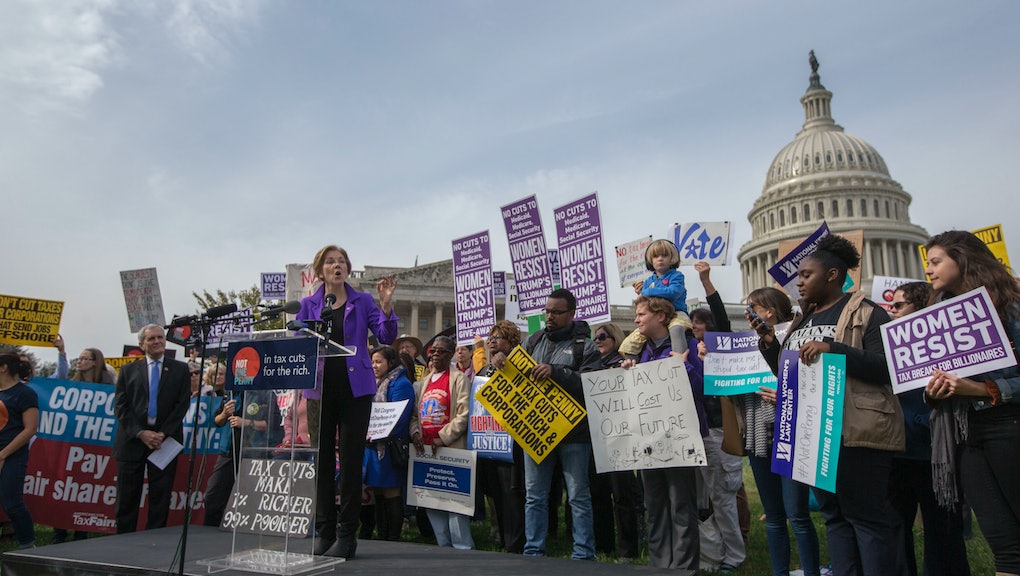 Tax reform cleared the House. Here’s the plan to kill it in the Senate.

Friday’s dispatch: The real battle over tax reform will be in the Senate

That gave the groups that pushed senators to repeatedly kill efforts to repeal and replace the Affordable Care Act in the Senate a huge boost in energy when they learned the Senate tax plan would include a repeal of the ACA’s individual mandate.

Since the House passed a health care reform bill in May, Republican senators have been deluged with phone calls, emails and protests in Washington and demonstrations in their home states.

Hundreds of people turned out to disrupt the only hearing of the Graham-Cassidy health care bill in late September. Americans with disabilities repeatedly led the in-person opposition to the health care plans. Sit-ins were organized in the offices of key Republican senators.

Activists say they will make the GOP feel the pain for reigniting the health care debate. Protests in Washington and in senators’ home states are planned for the next month. Organizers have again been circulating phone numbers people can use to call their senators, already making tens of thousands of calls to Congress over a couple weeks, activists said.

“Opposition to this bill was widespread before,” CREDO political director Murshed Zaheed said by email. “Trying to take away people’s health care will only intensify the grassroots resistance to the Trump tax scam.”

One factor that could work in favor of these groups when it comes to the tax bill debate: retirements. Flake and Corker do not have to worry about running for re-election. It’s also unclear how long McCain will continue in the Senate. All three are considering their legacies — and whether voting through an unpopular tax plan that guts health care is how they want to be remembered.

For those Republicans seeking re-election in 2018, the activist message is clear: “The moment the Republicans added an attack on health care to their corporate tax giveaway, they guaranteed a uncontrollable political firestorm,” Ben Wikler, Washington director for MoveOn.org, said by phone. “Either this bill dies or they lose their seats.”

Today’s question: Are you doing anything to oppose the Senate Republican tax reform/gut Obamacare?

Tax reform passage: The House easily passed its tax reform proposal on Thursday. No Democrats voted for it and 13 Republicans voted against it.

Mic’s James Dennin explains the details of the proposal. Basically, almost everyone will see a tax cut in the short term. But over time, the largest benefits are stilted to big corporations and wealthy Americans. Meanwhile, middle-class Americans may see no benefit — and some poorer Americans will see a tax increase. Read more from Dennin here.

And Emily Singer explains why being able to file your taxes on a postcard wouldn’t be all it’s cracked up to be.

Al Franken: The senior Democratic senator from Minnesota came under a firestorm of criticism Thursday after a woman said Franken forced her to kiss him and released a photo of him groping her. The Republican leader and numerous Democrats called for an ethics investigation into Franken, which he said he welcomed.

The woman who accused Franken accepted his apology, but added, “I made sure I was never alone with him again.” Some Democrats in Minnesota are calling for Franken to resign.

Trump weighed in about Franken on Twitter, calling him “Al Frankenstein.” He has yet to do anything similar about Alabama Senate candidate Roy Moore, who has been accused by eight women of sexual harassment and assault. The White House said Thursday “the people of Alabama should decide who their next senator should be.”

The Wall Street Journal has updates on the race of Doug Jones, the Democrat running in Alabama, and how his campaign was positioned to pick up steam even without the allegations against Moore. Yet another poll shows Moore trailing in that race.

Menendez: The corruption investigation into Sen. Bob Menendez (D-N.J.) was declared a mistrial. Menendez now faces a Senate ethics investigation, but it’s likely he will not have to step down — preventing the Democrats from losing a valuable Senate seat to an outgoing appointment by Republican New Jersey Gov. Chris Christie.

ISIS: The last town in Iraq held by the Islamic State group has been captured by Iraqi forces backed by the United States.

Disaster relief: The White House has asked for at least $44 billion more to fund hurricane relief. That’s actually tens of billions less than Texas and Puerto Rico were hoping for.

“Slums:” The head of faith-based and neighborhood partnerships at the Department of Homeland Security once said the black community is responsible for turning cities into “slums” and added “oil and dead bodies” are the only contributions of Islam.

George H.W. Bush: The former president is being accused of groping a woman in 1992.

The woman who said she was groped by Al Franken is speaking out.