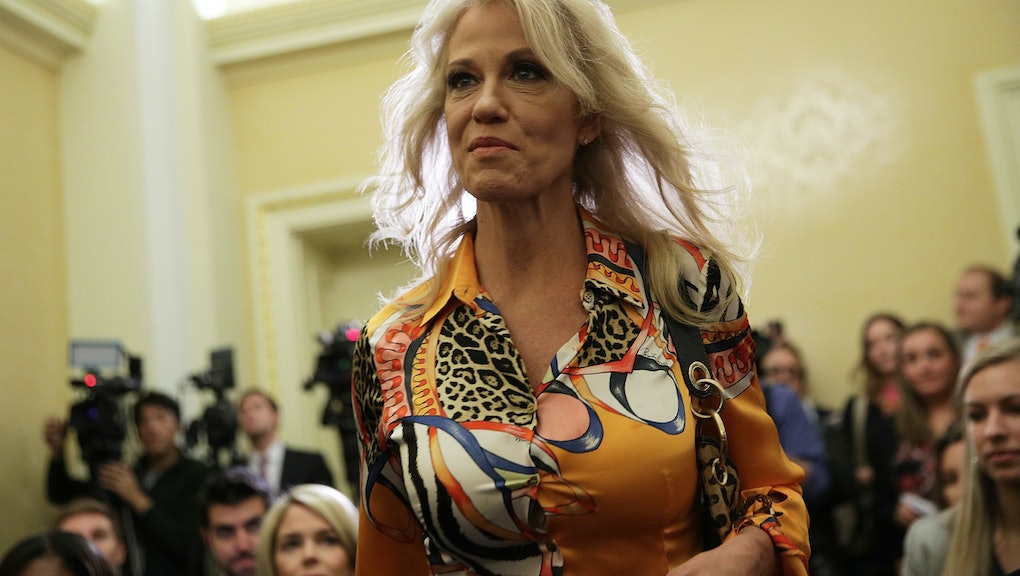 Kellyanne Conway says vote for Roy Moore. She once said “no Senate seat is worth more than a child.”

White House counselor Kellyanne Conway is changing her position on accused child molester Roy Moore and is now trying to rationalize a call for Republicans to vote for him in an upcoming special election for a U.S. Senate seat in Alabama.

During an appearance Monday morning on Fox News, Conway wouldn’t directly say the words “vote for Roy Moore.” But she said that if Republicans lose the Senate seat Moore is running for, it will be difficult for President Donald Trump to get his agenda passed — a de facto argument to vote against the Democrat and for Moore.

“Doug Jones in Alabama, folks, don’t be fooled,” Conway said, referring to the Democratic nominee in the race. “He will be a vote against tax cuts. He is weak on crime, weak on borders. He is strong on raising your taxes. He is terrible for property owners.”

To which Conway replied, “I’m telling you that we want the votes in the Senate to get this tax bill through.”

Moore is accused of molesting a 14-year-old and trying to date teenagers when he was in his 30s.

Conway as recently as last week suggested that there was no place in the Senate for Moore thanks to those allegations.

“Whatever the facts end up being, the premises, of course, the principle, the incontrovertible principle, is that there is no Senate seat worth more than a child,” Conway said Nov. 16 on the same Fox News program. “I have three daughters and a son, frankly, and we are all watching this.”

However, since Conway made that comment, multiple polls have shown Moore is now losing to Jones.

Jones now leads Moore in the RealClear Politics average for the first time.

If Moore loses, Republicans will see their Senate majority shrink from 52 seats to 51 — as the seat Moore is running for was held by Attorney General Jeff Sessions.

Holding just 51 seats would give Republicans even less of a margin of error to pass difficult legislation.