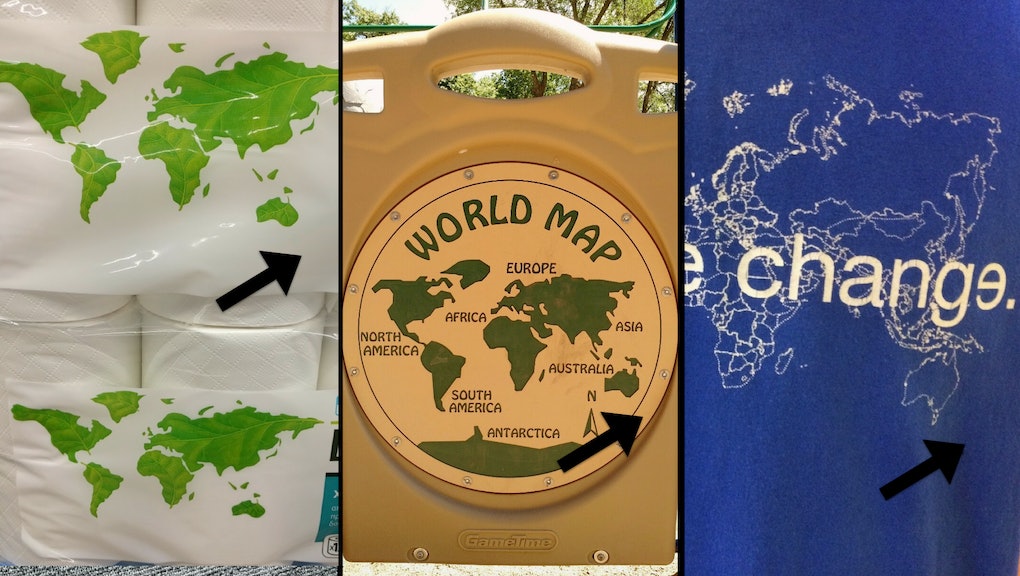 It’s easier than you think to forget about New Zealand.

The island nation boasts about 4.7 million people on a land mass that’s slightly larger than the United Kingdom — but you wouldn’t know it, looking at a surprisingly large number of maps.

For whatever reason, some mapmakers appear to just miss the country entirely. And lots of people are having a laugh online cataloging examples of the snub:

Even the New Zealand government gets playfully passive aggressive about the country’s sidelining on its website’s 404 page:

“New Zealand has given a lot to the world — Lorde, Sir Edmund Hillary, the Lord of the Rings films — but time and again we find ourselves left out, and left off the map,” journalist Hannah Martin mused Nov. 11 in the New Zealand publication Stuff. “Granted, we’re in a funny spot — we’re all the way down in the far corner, awkwardly floating somewhere to the right of Australia. But if a map can include tiny islands like Malta, Mauritius and New Caledonia, shouldn’t we get a mention too?”

Martin and other disgruntled residents probably have a point — New Zealand was passed over in some major ways in recent years: There was the time the nation was omitted from the United Nations seal outside of the Palace of Nations in Geneva. The time it was absent from a map in promotional materials for the Rugby World Cup, even though the New Zealand team was then the standing world champion.

There was also the case of Kiwi tourist Chloe Phillips-Harris, who claimed she was denied entry into Kazakhstan after customs officials there insisted her New Zealand passport was invalid — on the dubious premise that the island was not an independent nation, but an Australian state.

Kazakhstani officials reportedly denied this account, but the story still went viral in the local and international press — especially when Phillips-Harris told reporters the fiasco was complicated by the fact that the world map in her detention room — you guessed it — excluded New Zealand.

“It is corrupt and there are problems there but there are a lot of good people there too, it’s just a beautiful country to be in,” Phillips-Harris said of Kazakhstan after she returned home. “It’s just really unfortunate there was a world map that didn’t have New Zealand on it.”

You won’t find New Zealand in the board game Risk — not even in the latest edition, released in 2003.

This (often polite) Kiwi backlash has lead to the creation of a few online communities showcasing real-world examples of the phenomenon: a Tumblr entitled World Maps Without New Zealand and a subreddit, r/MapsWithoutNZ. They boast nearly 10,000 and 30,000 subscribers, respectively.

App developer Arnold Sakhnov, based in the country’s capital of Wellington, said he started World Maps Without New Zealand in 2014, after noticing how frequently the country was excluded and finding it “hilarious.” He stopped doing regular updates to the site earlier in 2017, but said at its height the blog was receiving upwards of ten submissions a day.

“It’s a very Kiwi humor kind of thing,” he told Mic. “People here in NZ know they are kind of irrelevant, but are almost proud of that. If you’ve seen Flight of the Conchords or, more recently, Taika Waititi’s movies, they convey this [sense of humor] quite well.”

“I’m happy to see this silly idea got picked up and people are having fun with it,” Sakhnov added. “I never wanted to take credit for it personally.”

Mic reached out to the admin of r/MapsWithoutNZ, who declined to give his real name, but said his handle — whangadude — refers to his New Zealand hometown of Whangamata. He now resides in Hamilton, a city on the country’s North Island.

“I created it after seeing people mention maps missing New Zealand on r/MapPorn, or in random discussion threads in r/NewZealand,” he told Mic via private message. “I never realized there would be so many maps and so much interest in it at the time, though.”

Whangadude said he’s been fascinated by maps since childhood, and took notice of New Zealand’s frequent absence from a young age.

“Most of the time it was in the background of a TV show or cartoon, [in which] the military would be in their war room, and a big map on the wall,” he wrote. “[There’d be] lights indicating cities or targets, and New Zealand was often not lit up, or completely absent.”

But, like most of the New Zealand map enthusiasts we spoke to, whangadude seemed to take the brushoff in stride.

“I think we are left out coz, at the end of the day, despite being about the same geographical size as say, Britain or Japan, at only 4 million inhabitants, we do not really make that much an impact on the world,” whangadude said. “And of course, when Europe is at the center of a map, the edges are going to be at the Pacific Ocean, and it’s just too easy to cut it off a little early.”

“The whole thing is just a bit of light-hearted fun, and no true Kiwi is going to be actually pissed off at seeing a map missing their homeland,” he added. “We’re used to it by now.”

“You get used to it,” he said. “Small country, miles from anywhere, it’s always been the case. We tend not to take it seriously, but it makes it all the sweeter when a Kiwi or a sports team, or the country itself, does make waves up in the Northern Hemisphere. And we do frequently punch above our weight.”

“I do think Kiwis are generally quite knowledgeable, well-travelled and aware of what’s going on elsewhere around the planet, but we also know that folk in the Northern Hemisphere have their own issues to deal with, and don’t tend to pay a lot of attention to anything south of the equator,” he said. “Nothing to get upset about. We like positive publicity (doesn’t everyone?), I like to think we are mature enough to ... handle being ignored.”

Andrew Douglas-Clifford, who also sits on the NZCS board, as its student representative, had another insight.

“From a map-making perspective, New Zealand’s omission from many world maps is partly due to the way the typical world map is centered on Europe, leaving New Zealand in the bottom right corner to be sometimes cropped off by accident or for convenience,” Douglas-Clifford said.

This may well account for many omissions, but even globes and maps centered on the Pacific Ocean itself still somehow manage to overlook the island nation:

Whatever the reason, Kiwis may find some consolation in the fact that some other nations are feeling left out, too: Subreddits like r/MapsWithoutTasmania, r/MapsWithoutHawaii, and r/MapsWithoutFlevoland also tout a modest, but growing, online following.