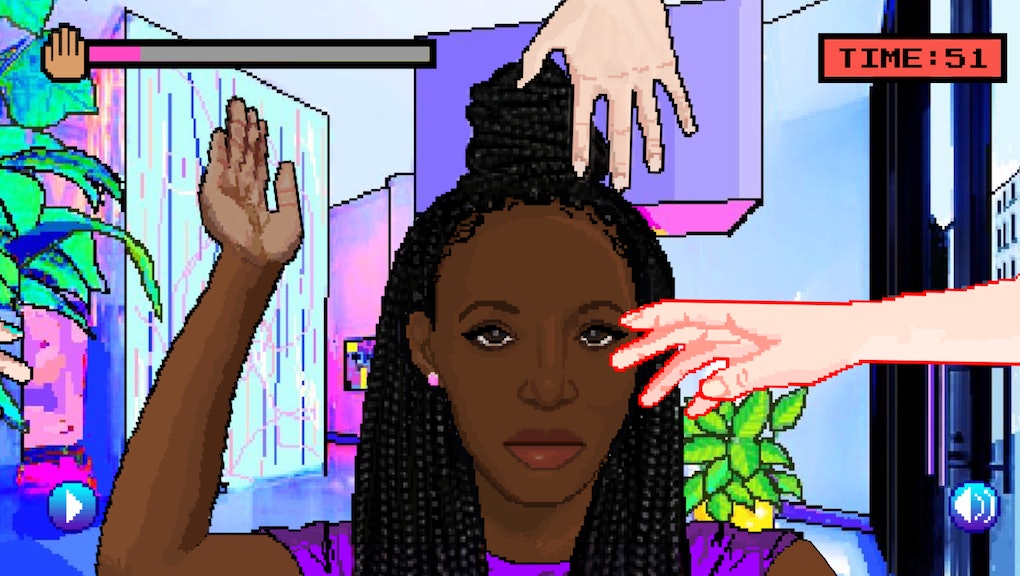 This is ‘Hair Nah,’ a game about black hair and white ignorance

For every black woman who has ever had to tell an ignorant white person to stop touching their hair, you have Momo Pixel to thank for the cathartic experience we’re about to share. It’s called Hair Nah, a stylish, free web game Pixel and a small team of developers made about trying to get through the day without a white person touching your hair.

Like most video games, Hair Nah greets you with a title screen. This one sports a 1980s Miami Vice-style aesthetic. When you hit “start,” a black woman’s hand appears on-screen, swatting away the white hand that’s been hovering ominously in the corner, punctuated by a cartoonish whip-crack sound straight out of a Bruce Lee movie.

“Aeva loves to travel, but is hesitant because people often invade her personal space by touching her hair without permission,” the game’s text says. “So help Aeva catch her flight and protect her hair by stopping the reaching hands.”

Once you decide how your Aeva will look — you choose a skin tone and hairstyle — the game begins. You have a minute to fill up the “Nah!” meter, which grows fuller as you tap the arrow keys to swat away invasive white hands reaching for your hair. While this is happening, you’ll hear voices from off screen saying things like, “Can I touch it?” and “Is it attached to your head?”

Pixel told Mic that Hair Nah was inspired by the countless times the white people of Portland, Oregon, have grabbed or touched her hair without her consent, but a specific encounter she had with a cashier stood out to her as particularly egregious.

“She’s being all friendly and just talking,” Pixel said. “I’m halfway paying attention. I turn to my friend Mulu [Habtemariam] to say something to him, but I feel something on my hair. I look down and the cashier had reached across the conveyer belt and was rubbing my hair. Her face was so gross with satisfaction. I legit could have thrown up.”

At the time, Pixel had already been working on Hair Nah, so Habtemariam — who helped work on the game — yelled out “hair nah” in response.

“I started cracking up,” Pixel said. “But I was still really upset.”

In a way, Hair Nah feels educational, like the kind of thing you’d send to someone who doesn’t understand why touching a black woman’s hair would be invasive. But Pixel said Hair Nah was designed specifically for black women to connect over a shared experience and make light of a very real problem.

Black women “don’t have a lot of things that are just for us,” Pixel said. “And this problem is so frustrating and annoying that I wanted us to get a laugh. To have something to finally say ‘No, respect my space,’ because often in real life, we don’t get that chance.”