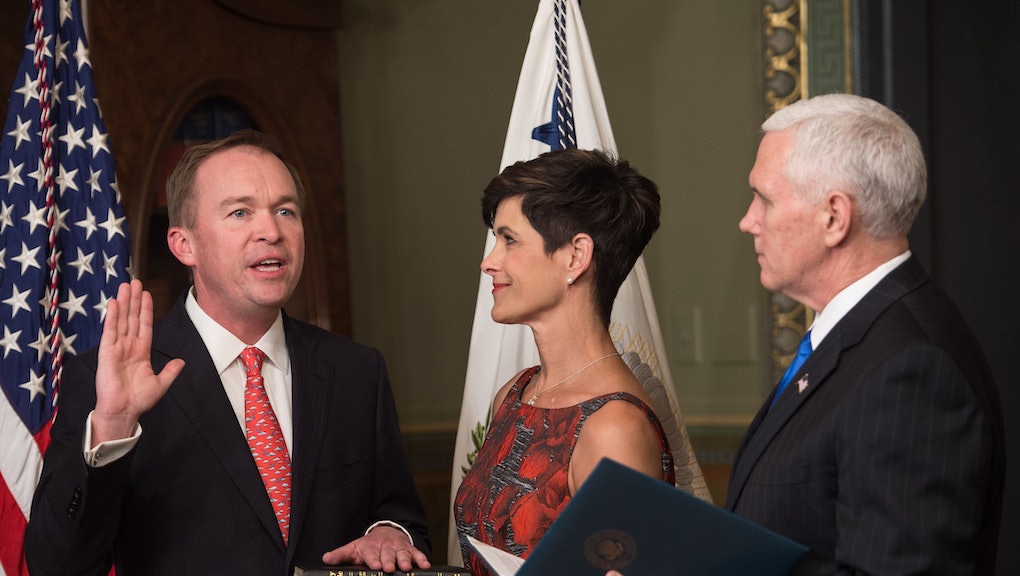 President Donald Trump is expected to name Office of Management and Budget director Mick Mulvaney acting head of the Consumer Financial Protection Bureau, the agency set up following the financial crisis to oversee bank, lender and credit card company regulation: The White House declined to comment on who would take on the interim role, despite reports by CBS and CNN that Mulvaney would step in following the departure of Richard Cordray.

Mulvaney, if appointed, would continue to hold his post at OMB, where he is in charge of helping the president devise a budget and coming up with projections for how much policies might eventually cost, according to CNN’s Jeremy Diamond. Last week, deputy press secretary Raj Shah said a new acting head of the agency would be announced at the “appropriate” time.

Sen. Elizabeth Warren (D-Mass.), who initially helped conceive of the CFPB, on Twitter called the choice a “giant middle finger” to consumers. Why is that — and what else should you know about Mulvaney? Here are three key facts about the reported CFPB director, who will have broad powers to oversee consumer finance companies.

1. Mulvaney has hinted that he thinks the CFPB shouldn’t exist

If appointed, Mulvaney would be the latest pick from Trump to head an agency they previously criticized. Energy secretary Rick Perry, for example, once appeared to call for his department’s abolition in a presidential debate, and Environmental Protection Agency administrator Scott Pruitt has sued the agency some 13 times.

Among other actions, Mulvaney has sponsored legislation that would shutter the CFPB, and he called the agency a “sick, sad joke” in a 2014 interview with Credit Union Times. In that same interview, Mulvaney also said “some of us want to get rid of it,” referring to himself and his fellow congress members.

During his confirmation hearings back in January, Mulvaney said he stood by his 2014 comments and that the CFPB was the “very worst kind of government entity,” and that it was “run by essentially a one-person dictator.”

According to the Federal Vacancies Reform Act, Trump would be able to appoint either a member of CFPB’s current senior leadership to be interim director, or he could appoint the head of another agency that has already been approved for the Senate. Mulvaney was narrowly approved for his current job on Feb. 16 by a two-vote margin.

If selected, Mulvaney could have a lot to juggle, as he has also been heavily involved in helping to sell Trump’s tax plan, which has been criticized for potentially raising taxes on certain middle-class families. In an interview Sunday with CNN, Mulvaney promised that Trump wouldn’t sign a bill that raised taxes on the middle class.

3. Mulvaney has called himself a “right wing nut job”

Before he joined Trump’s staff, Mulvaney was a member of the House of Representatives, where he helped launch the Freedom Caucus, a hard-right group that accused moderate Republicans of compromising too much with then-President Barack Obama.

The group grew to prominence when it voted against a measure to fund the government in 2013, leading to a temporary shutdown.

Mulvaney has even described himself as a “right-wing nut job,” according to Politico. Among other things, he has questioned whether the government should fund scientific research and Meals on Wheels, and he has called Social Security a “Ponzi scheme.” He also intimated that he thinks both the Department of Education and the Department of Energy might be unconstitutional, and said in the past he would not be opposed to further government shutdowns.

If appointed, Mulvaney would have substantial abilities to change the way the CFPB operates, given its independent structure. A major concern for consumer advocates is whether the agency’s new director will be as aggressive at suing perpetrators of financial scams and returning money to consumers.

Since its founding, the agency reports that it has secured some $12 billion in restitution from financial companies like Wells Fargo and Navient, the largest U.S. student loan servicer, for misleading consumers.