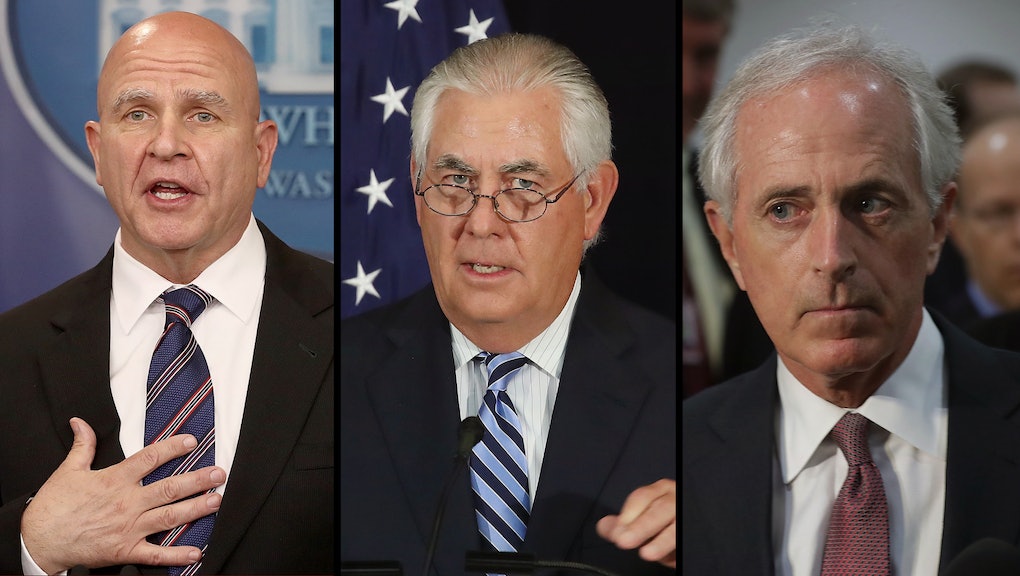 It’s no secret that President Donald Trump cares deeply about what people think of his intelligence. Whether it’s his frequent boasts about being a “very intelligent person” with an Ivy League education or his bizarre penchant for challenging rivals to an I.Q. test, Trump has made it clear that he is very sensitive to allegations that he is not smart.

But increasingly, members of his own party, including some in his own cabinet, have either publicly questioned Trump’s intelligence or have reportedly outed those feelings in private.

At a private dinner with an influential tech CEO, national security adviser H.R. McMaster reportedly referred to Trump as an “idiot,” “dope,” and “kindergartner,” according to BuzzFeed.

Safra Catz, the CEO of the tech company Oracle, reportedly told multiple people that McMaster had used those terms to describe Trump during a private dinner. Both McMaster and Catz denied the allegations to BuzzFeed.

In October, NBC News first reported that Secretary of State Rex Tillerson had privately referred to Trump as a “moron.” After the report, Tillerson appeared before the press and denied most of the allegations in the report, while refusing to directly deny the allegation that he called Trump a “moron.”

NBC went on to issue a more detailed report, alleging that the comments were made in response to Trump’s proposal to increase the U.S. military’s nuclear arsenal by tenfold — a move that would be illegal under international law.

Senator Bob Corker (R-Tenn.) has repeatedly implied that Trump is both unstable and not intelligent by suggesting that the White House has to function like an “adult day care center.”

In a March appearance on CNN, former Republican Representative David Jolly openly questioned whether or not Trump was intelligent enough to be president.

“Think about how much fun it would be, just to be the foil, you know, and to point out what an idiot this guy is,” Giles told Flake.

In the same conversation, Flake reportedly said if the Republican Party becomes “the party of Roy Moore and Donald Trump, we are toast.”

Former Republican presidential candidate Mitt Romney is also technically among the ranks of those Republicans who have questioned the president’s intelligence.

At one point in the speech, Romney criticized Trump by saying, “I’m afraid that when it comes to foreign policy [Trump] is very, very not smart.”

*It should be noted that, despite this public criticism of Trump’s foreign policy during the campaign, Romney later interviewed for the job of carrying out Trump’s “very, very not smart” foreign policy as secretary of state.

Trump instead chose a man, Rex Tillerson, who would would wait until several months in office before letting it be known that he believes the president is a “moron.”