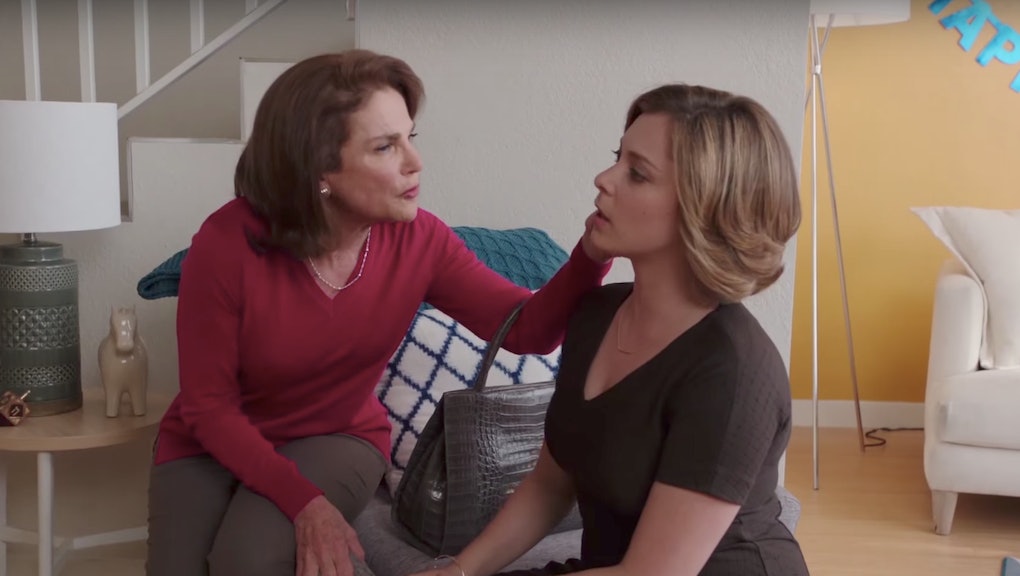 Crazy Ex-Girlfriend is many things: a musical-comedy that features genuinely memorable songs, a postmodern send-up of rom-com cliches, a show anchored by rewarding female friendships. But it’s also one of the most striking and authentic explorations of Jewish identity on television today — especially when it comes to the relationships between Jewish mothers and their daughters.

The Jewishness of main character Rebecca Bunch (played by the incomparable Rachel Bloom, also co-creator of the show) has always been a key facet of the series, but it’s particularly pronounced whenever she’s interacting with her domineering mother, Naomi (Tovah Feldshuh).

Naomi’s season one musical number “Where’s the Bathroom” is the apotheosis of hypercritical Jewish mothering, and the infamous “JAP Battle” song featuring Rebecca and her nemesis Audra Levine is chock-full of Jewish references, including the ways their mothers have pitted the two against each other since they were children. Then, there’s the hilarious talking-to Rebecca gets from Naomi and Rabbi Shari (Patti Lupone) in season two’s “Remember That We Suffered.”

But in the show’s third and current season, Rebecca’s relationship with her mom is played less for laughs; instead, the series is taking a hard look at the fraught dynamic between mothers and daughters, which likely strikes a chord with women who grew up in Jewish families.

In season three, Crazy Ex-Girlfriend is delivering on its tongue-in-cheek title: Rebecca’s mental illness is front and center, and the character’s finally reckoning with it in a serious way. The past few episodes have seen her hit bottom — lashing out at all of her friends, quitting her job at the law firm where she works, embarking upon a Fatal Attraction-style revenge fantasy targeting the man who left her at the altar, Josh (Vincent Rodriguez III), and sleeping with the father of another ex. This all culminates with a suicide attempt, when Rebecca overdoses on anti-anxiety medication while on a plane, returning to her adopted hometown of West Covina, California. In the show’s most recent episode, Rebecca’s in a hospital back in West Covina, getting diagnosed with borderline personality disorder and beginning to accept the reality of her illness.

But part of what pushes Rebecca to down that bottle of pills is her brief stay with her mother, in Scarsdale, New York, in the third season’s fifth episode. After burning all of her bridges in West Covina, Rebecca decides to move back to New York and crash at her mother’s house. And Naomi’s judgmental, control-freak nature is in full bloom in the episode’s opening scenes, as she harangues Rebecca to get out of bed after only one day of “moping.”

Soon after, Naomi pronounces, “You know my darling, it’s time that I take over the reins of your life because, clearly, you’re incapable.” Despondent, Rebecca agrees. There’s no empathy shown by Naomi — no understanding that Rebecca’s poor decisions are a result of her mental illness — and no space for Rebecca to really feel her depression or reflect on the spiteful things she said to her friends.

But once Naomi pokes around on Rebecca’s computer and sees that her only daughter’s been researching the least painful ways to commit suicide, she changes tactics. Suddenly, she’s pampering Rebecca. Instead of her incessant fat-shaming (quite common among upper-class Jewish mothers), Naomi encourages her daughter to indulge in strawberry milkshakes. Rebecca responds, “This is the first time in my life you’ve ever encouraged me to eat,” a line that surely resonates in the souls of many Jewish women.

That extra-special treatment is enough to inspire the episode’s big musical number, “Maybe She’s Not Such a Heinous Bitch After All,” which is focused squarely on how Rebecca views her mother. An ode to the Phil Spector-produced girl groups of the ’60s, the song is an upbeat number whose music belies its bitterness.

And in a feminist twist, the track replaces the classic father-daughter Oedipal complex with a mother-daughter take: “My relationship with her was my first failed romance/ And now finally the cute boy’s asking me to dance.” This wry nod to Freudian psychology is perfectly in line with the show’s tone and approach to both Rebecca’s mental illness and how she relates to her mom: It’s intended to both mock and provide insight.

The song also calls to mind all of the ways that Rebecca has frustrated Naomi’s expectations again and again during the show’s run. Throughout Crazy Ex-Girlfriend, the show’s writers have had Rebecca regularly subvert the Jewish American Princess, or JAP, trope, thereby disappointing her mom. First, none of Rebecca’s choices in romantic partners — Josh (Filipino), Greg (Italian-American) and Nathaniel (WASP) — are Jewish, and the first two aren’t economically or socially powerful men.

Second, despite Rebecca’s Ivy League credentials and skill as a lawyer, she’s not particularly ambitious in her own career (unlike her nemesis, Audra Levine); this is particularly galling to Naomi, as she’s invested everything into Rebecca’s professional success. And, of course, Rebecca rejects Naomi’s obsession with weight, as displayed brilliantly via “The Sexy Getting Ready Song” (wherein she squeezes her belly fat into Spanx) and “Heavy Boobs” (an ode to Rebecca’s ample bosom, often shown off in her wardrobe choices).

Later in the “Heinous Bitch” episode, we find out that Naomi’s change of heart is an elaborate ruse to serve Rebecca anti-anxiety pills, by slipping them into the milkshakes. Rebecca feels betrayed — understandably so — but it’s also clear that Naomi was doing what she thought she had to.

When Rebecca sneaks out of the house to take a plane back to West Covina, she leaves a goodbye note that simply says, “I know you did your best.” Naomi is, after all, a single mom whose ex-husband abandoned his wife and child, and her overbearing tendencies have long been channeled into this one relationship with her daughter, which explains why she wants to “fix” Rebecca’s mental health. In short: There’s no easy answer to the question of whether Naomi did the right thing.

Rachel Bloom and co-creator Aline Brosh McKenna took part in a Twitter Q&A session immediately after the season’s fifth episode aired. Bloom’s response to the question of how the writers decided on Naomi’s response to Rebecca’s suicidal thoughts was very telling. She stated, “Naomi’s whole motivation is survival. Survive no matter what.” I believe this is Jewish code for the ways that survivors’ guilt influences parenting, specifically among the baby boomer generation — of which Naomi is a part — whose parents may have escaped or had family die in the Holocaust.

Details like that are part of the reason why Crazy Ex-Girlfriend resonates so thoroughly with me as a Jewish woman. The series’ nuanced toggling between comedy and drama, between cutting satire and painful trauma, reflects the range of Jewish-American experience. Although the material cuts deep, this sort of honesty is what makes it such an exceptional show.