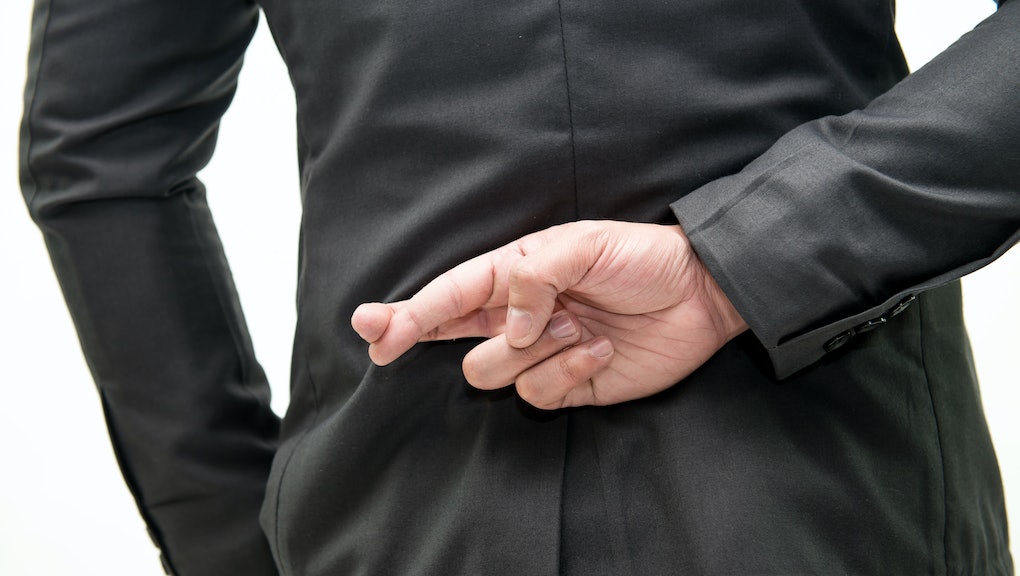 Is it normal to lie about money, work or job skills? What data suggests about lying — and gender

When you’re trying to land your dream job, it’s natural to try to talk yourself up to present yourself in the best light possible. Yet what might feel like a slight exaggeration — or a positive spin on the truth — to you could be seen by a hiring manager as a lie. Indeed, three out of four human resource managers say they’ve caught a resume lie, according to a 2017 CareerBuilder survey.

As it turns out, some data suggests there could be a gender divide in who lies: In a recent self-reported survey of 1,000 full-time workers by the online course site Udemy, men are three times more likely than women to tell falsehoods about their job skills and qualifications. A separate survey by online resume template company Hloom found that 24.4% of men said they’ve told a “white lie” on their resume, compared to 18.5% of women.

Millennials may also be more likely to lie on their resume, LinkedIn profile or job interview than other generations. While just 4% of baby boomers surveyed by Udemy said they did so, 24% of millennials admitted to telling whoppers.

The trouble with self-reported surveys, however, is that “people probably lie about lying,” said Anna Dreber Almenberg, an economics professor at the Stockholm School of Economics and lead author of a 2008 paper in the journal Economics Letters that found men are more likely than women to lie in order to secure a monetary benefit. People tend to underreport lies, Dreber Almenberg said, which means rates of lying in self-reported surveys are artificially low.

Whether something is a lie can be subjective. For example, one person may see a job posting with 10 qualifications and believe he is qualified despite possessing only one. Another may see the same posting and consider herself unqualified because she has only six of the 10 skills.

“Sometimes when people lie, they may believe it themselves to the point where they actually think it’s the truth and they’re numb to the fact they’ve been lying the whole time, even to themselves,” Vicki Salemi, a career expert at Monster, said in an email interview.

There’s evidence gender plays a role. “Men have the Dunning-Kruger effect where they think they are better than they are, whereas more women have the imposter syndrome, where they think they aren’t as good,” Carol Goman, a public speaker and author of the 2013 book The Truth About Lies in the Workplace, said. “If women fail, they tend to internalize the failure, and if men fail, they tend to externalize it.”

Studies in other contexts corroborate the gender divide: Some 55% of men versus 38% of women were willing to lie to impose a cost on someone else by overselling a deal as good for the other person when it really wasn’t, Dreber Almenberg’s peer-reviewed article in Economic Letters found.

Similarly, another study published in Management Science in 2011 concluded that women were “less likely to lie when it is costly to the other side.”

And when it comes to lying to the IRS to pay less in income taxes, 30% of men — but only 18% of women — said it was acceptable, according to one 2016 Harris Poll of 2,115 adults commissioned by NerdWallet, which also found men were more likely to lie to lower their car or life insurance rates.

“Women are socialized to please and to be liked,” said NerdWallet career expert Brianna McGurran. “Women are probably a little bit more afraid to get caught.”

When it comes to lying in general, “women exhibit greater propensities to tell the truth than their male counterparts,” according to a review of 63 academic studies published by the Journal of Economic Psychology in 2013. Specifically, “female subjects are significantly less likely to overreport the true value of a die roll, misrepresent a coin toss, engage in academic cheating, retain excessive change and overstate the number of correctly completed matrices.”

Still, the jury is out on whether men lie more than women for monetary benefit across the board.

In certain situations, men are more likely to misrepresent information or make false promises in negotiations with other men, according to a 2017 study in the Academy of Management journal. But there were no differences between men and women in terms of lying to gain an economic edge, according to 2012 and 2013 studies published in Economic Letters.

“There is no consensus,” Dreber Almenberg said. “If there is any gender difference, if there is a monetary cost to someone else, then women are more honest.”

What’s more, while some people are “unconditional” cheaters or non-cheaters, everyone else’s honesty is “susceptible to monitoring and intrinsic lying costs,” according to a piece published in the Journal of Economic Psychology. In other words, some folks are dishonest all the time, some never cheat and some are more or less likely to lie depending on how carefully they are being monitored — and what would happen if they get caught.

Why you shouldn’t lie during your job hunt

If you’re worried about unintentionally exaggerating, be extra careful about specific facts. “Don’t lie on anything that can be fact-checked — names of employers and alma maters, dates of employment and graduation, titles,” Caroline Ceniza-Levine, career expert at SixFigureStart, said in an email.

Hiring managers are well-versed in dealing with fibbers. “I could always tell if they didn’t possess a specific skill [when] they talked loquaciously around it. It got to the point where I’d have to reiterate the question matter-of-factly, like yes or no, did you do this or not?” Salemi said.

Resume lies might be among the most egregious — and amusing — examples of dishonesty. The CareerBuilder survey of hiring managers, for instance, shared the story of one applicant who said he studied under Friedrich Nietzsche (who died in the year 1900) and another claiming to be an anti-terrorist spy for the CIA... while he was still in elementary school.

So, which creative interpretations of the truth are OK? For one: “If you have a title that’s generic (manager) and you want to be more descriptive, you can put your description, but also put the real title,” Ceniza-Levine said.

But in general, any tweaks to the truth are risky. “You won’t get the job if the truth is uncovered,” Ceniza-Levine added. “If you manage to get hired, you may find yourself in a job you actually can’t do, or you may be fired depending on how egregious the lie is. You’ll also lose credibility and integrity among the people who know that you lied, and this will hurt you for future jobs.”