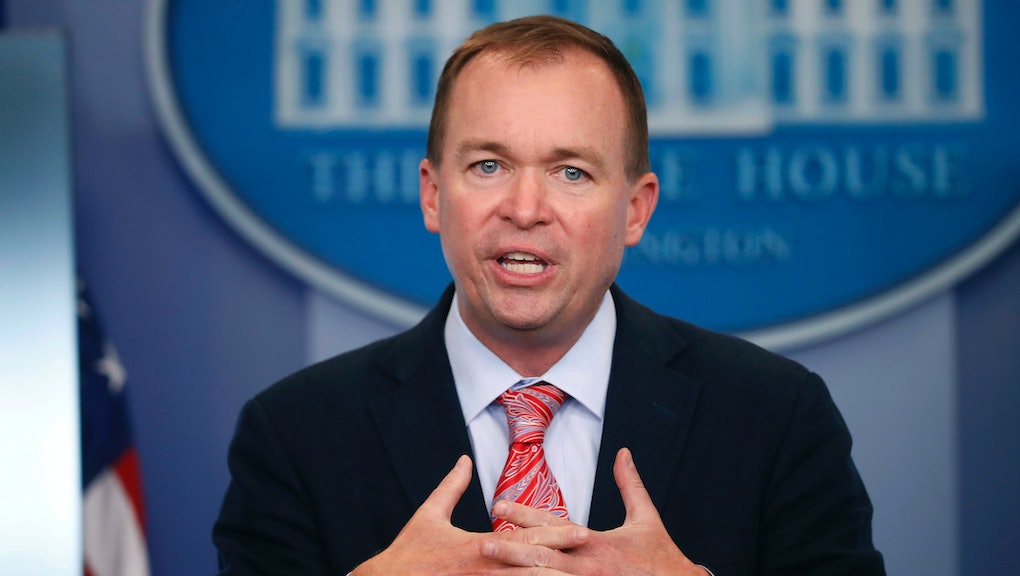 3 key takeaways from the power struggle at the CFPB

But though Mulvaney may have showed up for the job — with donuts in tow — there was one great, big hitch: Leandra English, a successor named by Cordray, alleges that she is actually the rightful acting director of the bureau. And on Sunday, English filed a lawsuit arguing that the budget director shouldn’t have the ability to assume the leadership post at all.

English’s legal challenge has set up a power struggle at the agency; both showed up to work on Monday, both claim that they are the rightful acting director and Mulvaney has reportedly directed bureau employees to “disregard” English’s authority.

The CFPB was first established as part of the Dodd-Frank Act in 2010 as an independent bureau created in response to the devastation of the 2008 financial crisis. The bureau, the CFPB notes on their website, is “focused on one goal: watching out for American consumers in the market for consumer financial products and services.”

Here are the key takeaways from the power struggle at the heart of the CFPB’s future.

When Cordray resigned from his position as director in November, he officially named English, who previously served as Cordray’s chief of staff, as the agency’s deputy director.

Under the Dodd-Frank Act, English’s position as deputy director ensured that she would assume the acting director position. According to Dodd-Frank, as quoted in English’s lawsuit, the law stipulates that the deputy director, who is “appointed by the director,” shall “serve as acting Director in the absence or unavailability of the Director.”

Although the CFPB head is appointed by the president and confirmed by the Senate, the director is appointed for a five-year term, which Cordray began when he was confirmed in July 2013 after being appointed by former president Barack Obama. Under the terms of the bureau’s creation, English’s lawsuit notes, the CFPB director does not serve “at the pleasure of the president,” but can rather only be removed from office for “inefficiency, neglect of duty, or malfeasance in office.”

English is alleging in her lawsuit that she has the legal right to remain in the director position for the remainder of Cordray’s term under Dodd-Frank. The lawsuit argues that Trump’s appointment of Mulvaney is “unlawful,” noting both the clear language of Dodd-Frank and Mulvaney’s current White House position, which would challenge the CFPB’s independence.

“The President’s attempt to install a White House official at the head of an independent agency — while allowing that official to simultaneously serve in the White House — is unprecedented,” English’s lawyer, Deepak Gupta of the law firm Gupta Wessler, said in a statement. “The law is clear: Leandra English is acting director of the Consumer Financial Protection Bureau until the Senate confirms a new director.”

Soon after Cordray named English as his successor, Trump instead took matters into his own hands, releasing a statement naming Mulvaney as acting director.

The Trump administration is claiming to have the authority to make the appointment under the Federal Vacancies Reform Act of 1998, which stipulates that “the President (and only the President) may direct a person who serves in an office for which appointment is required to be made by the President, by and with the advice and consent of the Senate, to perform the functions and duties of the vacant office temporarily in an acting capacity.”

Whether or not Trump actually has the ability to use the Vacancies Reform Act to appoint Mulvaney, however, is now up for debate. The U.S. Department of Justice Office of Legal Counsel released a memorandum concluding that Trump does have the authority to appoint Mulvaney, writing that the Dodd-Frank statute elevating the deputy director “does not displace the President’s authority under the Vacancies Reform Act.”

In her lawsuit, however, English pointed to a clause in the Vacancies Reform Act which stipulates that the act “does not control” an appointment in cases where “a statutory provision expressly ... designates an officer or employee to perform the functions and duties of a specified office temporarily in an acting capacity,” as Dodd-Frank does.

English’s lawsuit also noted that an earlier version of Dodd-Frank would have allowed for the use of the Vacancies Reform Act, but was replaced with the current language giving power to the deputy director.

Even if he is lawfully able to assume the position of CFPB acting director, Mulvaney’s appointment to the position has also been called into question because he has repeatedly criticized the bureau’s very existence, voting in favor of eliminating the agency while in Congress and once referring to the CFPB as “a sick, sad joke.”

At a hearing in the U.S. House of Representatives, English’s lawsuit noted, Mulvaney once said: “I don’t like the fact that CFPB exists, I’ll be perfectly honest with you.”

Support for English vs. Mulvaney is falling along party lines

As the power struggle between English and Mulvaney plays out, support for the two potential acting heads is splitting based on party lines.

Former Rep. Barney Frank, who co-authored the Dodd-Frank legislation, voiced his support for Cordray’s appointment of English in an interview with CNN, saying: “We gave a lot of attention to how to structure the CFPB and how to protect its independence, because its job is to go after some very powerful forces in the economy. ... The point is, we intend what Cordray was doing to have this kind of autonomy.”

The Democratic leadership in Congress have also publicly voiced their opposition to Trump’s appointment. Senate Minority Leader Chuck Schumer accused Trump of ignoring the law “in order to put a fox in charge of a hen house,” while House Minority Leader Nancy Pelosi (D-Calif.) said in a statement, “All Americans should be deeply concerned about the White House’s cynical decision to flout the law and attempt to put the ringleader of its dangerous, anti-consumer protection policies in charge.”

In an interview with CNN, Democratic Sen. Dick Durbin also sided with English.

“Wall Street hates it like the devil hates holy water,” Durbin said, as quoted by Talking Points Memo. “And they’re trying to put an end to it with … Mulvaney stepping into Cordray’s spot. But the statute is specific, it’s clear, and it says that the deputy shall take over.”

Republicans, meanwhile, have thrown their support behind Mulvaney. Sen. Lindsey Graham said Trump was “on good ground” to appoint Mulvaney and hoped he would “ride herd on these folks,” TPM reported, while Arkansas Sen. Tom Cotton called English’s lawsuit “just the latest lawless action” by the “rogue” and “unconstitutional” CFPB, according to CNN.

“The President should fire her immediately and anyone who disobeys Director Mulvaney’s orders should also be fired summarily,” Cotton said. “The Constitution and the law must prevail against the supposed resistance.”