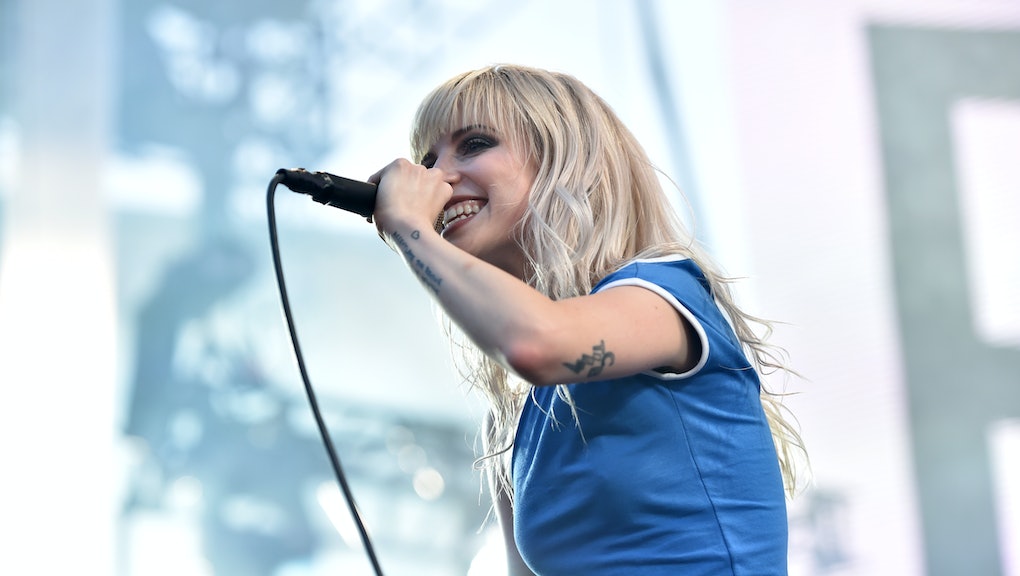 Grammys 2018: Women were almost entirely shut out of the rock categories. And there’s no excuse.

Criticizing the Grammy nominations for being out of touch is a take so tired it’s finally old enough to potentially merit a Grammy nomination itself. But, strangely, while the Recording Academy seems to have cobbled together a decent-enough spate of hip-hop nominees, the relevance of the rock acts has somehow regressed even further.

Nowhere is that more evident than in the dearth of attention paid to women in rock and roll. Of the 25 nominations in the major categories of the rock, alternative and metal fields, a grand total of two went to women-led acts, one justifiably recognizing Reba Meyers from metalcore band Code Orange for her blistering vocals on “Forever,” and the other in the form of K. Flay’s best rock song nomination for “Blood In the Cut,” from April’s Every Where Is Some Where. Sure, the latter is a fine song, but it’s the type of heavily produced noir-rock you might expect to hear soundtracking a murder-scene montage during a bland network procedural. Its inclusion here only underlines the glaring absence of so much other, more interesting work.

To be clear, this isn’t to say “This is the year of women in rock,” or any other such reductive take. That women are making most of the best rock music is no longer an anomaly, or a topic worthy of a trend piece; it is simply a fact to be taken for granted and, ideally, never talked about in such terms again. Except, of course, when the standard-bearers of acclaim and recognition fuck up so badly. It amounts to a dereliction of listening duty — not in a political or ally-ship sense, although you could make that argument — but as evidence that you just didn’t do the homework.

It’s not like the dad-rock fetishists of the academy even need to stray too far outside of their comfort zone to find worthy contenders. Toronto act Alvvays, whose 2014 debut was so stunning it should still be winning Grammys, released a similarly swooning and expertly crafted collection of NPR-core dream-indie in the form of September’s Antisocialites. That album’s highpoint, “In Undertow,” was one of the saddest and catchiest songs of the year in any genre.

Elsewhere, women-fronted acts like Diet Cig, Charly Bliss, Cherry Glazerr, Adult Mom, Soccer Mommy and Daddy Issues all released music that trades in a fuzzier, ‘90s-gaze style, which should be comforting to the academy. After all, that’s when more than a few of the bands they did actually nominate — like Foo Fighters and Metallica — were last making genuinely compelling music.

Of course, some of the dudes represented in the 2018 nominations did put out some quality music. The War On Drugs’ A Deeper Understanding is a contrast of vocal restraint and well-arranged melodies, and “Go to War,” by San Antonio act Nothing More, is rousing and defiant in the mold of previous Grammy favorites Imagine Dragons. But that over-sized, man-feelings bombast still somehow seems smaller than the work of Pennsylvania’s Petal, who recently released an EP called Comfort that makes for a shattering dark night of the soul.

Stretching a little further back for inspiration, bands with more of a sense of gloomy propulsion, like Sweden’s Makthaverskan and London’s Desperate Journalist, were something like women-led reincarnations of Joy Division and The Smiths. Although, come to think of it, neither of those acts ever got much awards-season love, either.

The list goes on and on. Indie-emo favorites Camp Cope and Cayetana released a split seven-inch that was by turns introspective and raw, blissfully danceable and full of youthful abandon. Crossover emo stalwarts Tigers Jaw released their most distinctive and fully realized work to date in May’s Spin, with songwriting contributions from co-lead Brianna Collins stealing the show. Allison Crutchfield, Chastity Belt, Palehound and Football, Etc. were all similarly well received by critics throughout the year.

All of this isn’t to say that I actually would ever expect the Grammys to only recognize bands that are largely unknown outside of the DIY and punk scenes. I’m not naive. But a band like, say, Paramore isn’t exactly obscure. They’re a modern-rock staple at this point, are plenty popular and released an eligible album with May’s After Laughter. They really couldn’t have secured one of the slots reserved for veteran acts?

This is a year when it’s become abundantly clear that it’s important to believe women. A small but nonetheless necessary step in that direction might be to start listening to them.