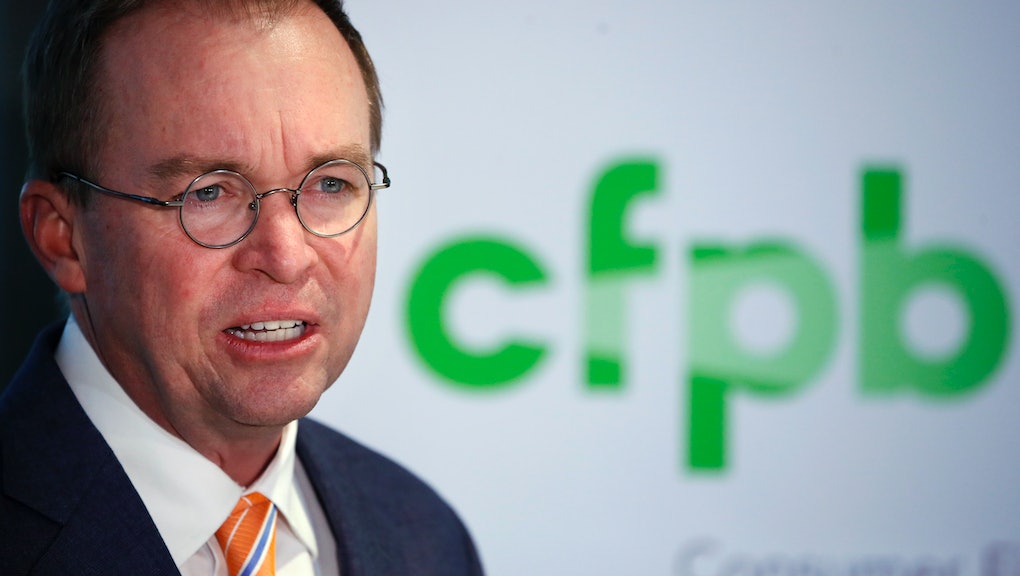 Who is the real CFPB acting director: Mick Mulvaney or Leandra English? Here’s what to know.

A federal judge appointed by President Donald Trump, Timothy Kelly, sided with the president’s pick to run the Consumer Financial Protection Bureau in a leadership dispute on Tuesday. The bizarre turn of events briefly left the consumer watchdog with two people claiming to be in charge, after former director Richard Cordray resigned, it is widely believed, to mount a Democratic bid for Ohio governor.

Trump tweeted about the decision Tuesday evening after the ruling was announced, calling it a “big win for the consumer!”

But the case is likely not over yet. Judge Kelly told the Washington Post that the case raised constitutional issues and there “needs to be an answer from the courts.”

The dispute pits Office of Management and Budget director Mick Mulvaney — whom Trump appointed as CFPB acting director using the Federal Vacancies Reform Act — against Leandra English, Cordray’s former chief of staff, who was recently appointed to be the agency’s deputy director.

English’s attorney did not immediately respond to a request for comment, though she is expected to seek either a preliminary or permanent injunction, either of which could be appealed in higher court. English’s attorney told Politico he is consulting with her about her next steps.

English’s attorneys sought to block Mulvaney’s appointment, arguing that the CFPB’s leadership structure requires that the president must have the Senate’s approval to install a new director. Until that happens, they argued, the Dodd-Frank Act established that the deputy director is supposed to run the agency, which regulates everything from the credit bureaus and consumer banks to student loan servicers and debt collectors.

On the flip side, the federal government argued that the Federal Vacancies Reform Act allows the president to appoint a temporary acting director who has already been approved by the Senate for another position. That means that for the time being, Mulvaney will be working two jobs.

It was a dramatic two days for the agency. Both Mulvaney and English sent emails to staff on Monday morning signed “acting director,” though Mulvaney had the support of the CFPB’s general counsel. On two occasions, Mulvaney sent memos to staff instructing them to disregard English’s instructions. On Tuesday, Mulvaney also appeared to set up a new Twitter account with the handle @CFPBDirector.

Since its inception, the CFPB has returned nearly $12 billion to the victims of financial scams. In the past, Mulvaney has supported legislation in Congress that would scrap the agency entirely. In 2014, he also told the Credit Union Times, “It turns up being a joke, and that’s what the CFPB really has been, in a sick, sad kind of way.”