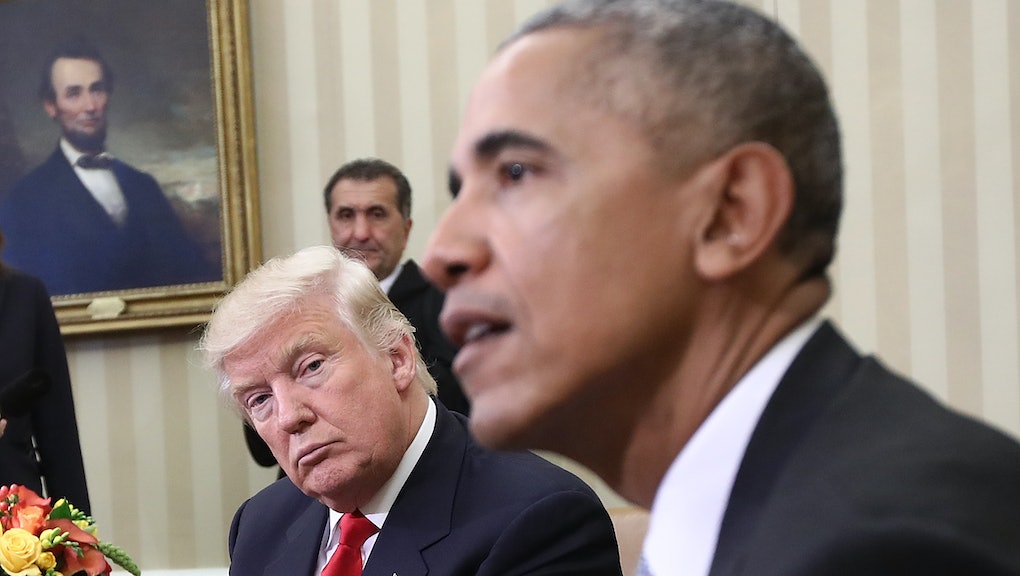 Report: Trump still doesn’t think Obama was born in the US

President Donald Trump took credit during the campaign for “finishing” the racist conspiracy theory that Barack Obama was not born in the United States — but it turns out that he may still be clinging to his birtherism.

That’s according to a report in the New York Times on Tuesday, which reported that the president has continued to “privately harbor a handful of conspiracy theories that have no grounding in fact” — including questioning his predecessor’s birth certificate.

“[Trump] has had a hard time letting go of his claim that Mr. Obama was not born in the United States,” the Times reported, paraphrasing a senator who overheard Trump again expressing doubts about Obama’s birthplace.

Trump for years insisted that Obama was not actually born in Hawaii and that his birth certificate was a fraud.

“I know that there’s going to be a segment of people for which, no matter what we put out, this issue will not be put to rest,” Obama said in a news conference at the time. “But I’m speaking to the vast majority of the American people, as well as to the press. We do not have time for this kind of silliness. We’ve got better stuff to do.”

Trump — who rose to political prominence questioning Obama’s legitimacy — claimed during the campaign that his Democratic opponent, Hillary Clinton, had started the birther conspiracy theory and that he had “finished it.”

But, remarkably, Trump apparently continues to persist in the belief that Obama’s birth certificate may have been forged.

According to the Times report, Trump also has begun to revive his conspiracy theory that he only lost the popular vote in the 2016 election because millions voted illegally and has even suggested that the infamous Access Hollywood tape, in which he bragged that he could “grab [women] by the pussy” because he is a celebrity, may have been faked.

Trump has long dabbled in conspiracy mongering, including associating with Infowars’ Alex Jones — who has said the 2012 Sandy Hook massacre was a hoax.

Sen. Jeff Flake (R-Ariz.) — an outspoken critic of the president — told the Times that Trump has a “dangerous” disregard for facts.

“It’s dangerous to democracy,” Flake said. “You’ve got to have shared facts.”