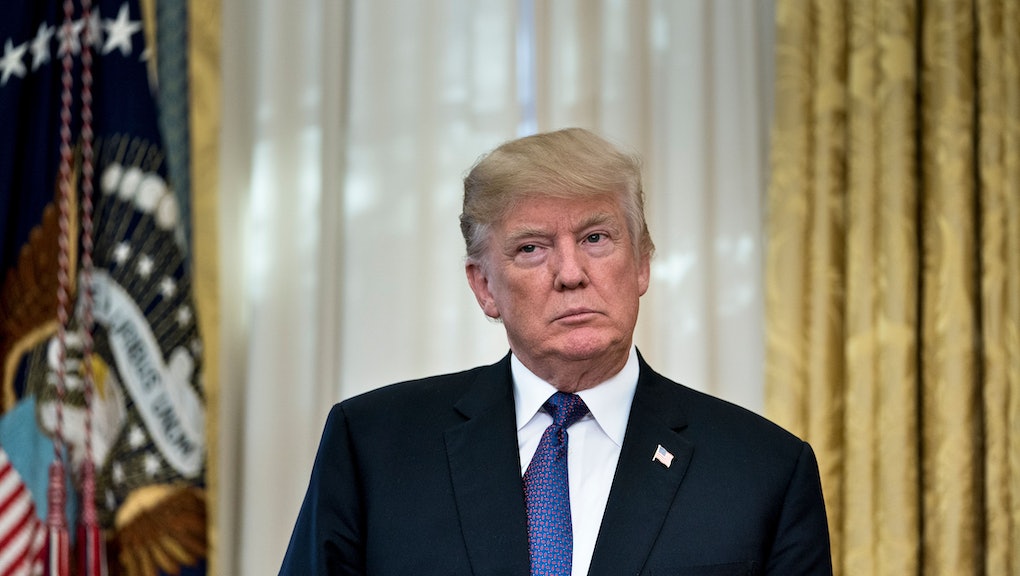 If it’s a Republican — or himself — on the receiving end of allegations, no matter how serious, it’s another story.

On Wednesday, Trump used the firing of Today host Matt Lauer over alleged “inappropriate sexual behavior” as a peg for one of his trademark attacks on the media, tweeting that network brass should be canned for “putting out so much fake news” and that MSNBC’s Joe Scarborough should be axed over an “unsolved mystery” — an apparent reference to a former female aide’s 2001 death that a medical examiner attributed to an undiagnosed heart condition.

His immediate apparent acceptance of the Lauer accusations — and those against Sen. Al Franken (D-Minn.) — stand in stark contrast to his reaction to allegations of child molestation against Republican Roy Moore, the evangelical extremist running for Jeff Sessions’ former Alabama senate seat.

Trump has repeatedly refused to condemn the ex-judge, instead continuing to attempt to rally voters behind him against Democrat Doug Jones, whom the president has said would be “BAD.”

It’s a stunning double standard, but it’s also not surprising coming from Trump; fiercely partisan politics inform his reaction to just about everything, from sexual misconduct to terrorism to free speech.

Hypocrisy, of course, is nothing new in politics.

But the strain of it Trump and his allies have injected into American politics seems different — so much so, McGill University political theorist Jacob T. Levy argued in the Los Angeles Times in February, that it is not so much hypocrisy as it is “nihilism.”

“Some hypocrites don’t feel shame, but at least they formally acknowledge that there are things about which one should be ashamed,” Levy wrote. “The Trump administration operates on a different, shameless, plane.”

Indeed, in Trumpland, there doesn’t even seem to be a pretense of consistency.

After a white man killed 58 people and injured more than 500 others in the Las Vegas shooting, it was “premature” to talk about gun control.

“There’s a time and place for a political debate, but now is the time to unite as a country,” press secretary Sarah Huckabee Sanders said.

But Trump apparently didn’t think it “premature” to call for “MUCH tougher” immigration laws when, a month after the Vegas shooting, an Uzbek immigrant plowed a truck onto a bike path in Lower Manhattan, killing eight people. Within hours, the president was using it to push his immigration proposals.

“Being politically correct is fine, but not for this!” Trump tweeted.

Trump has also been quick to dismiss reports from outlets that he doesn’t like as being “fake news.” But he has been just as quick to latch onto stories from more Trump-friendly outlets or those that fit his narrative — even if the facts don’t bear them out.

During the campaign, for instance, he famously suggested that the father of Sen. Ted Cruz (R-Texas), his rival in the GOP primary, was involved in the 1963 assassination of President John F. Kennedy — a conspiracy theory he pulled from the pages of the National Enquirer.

The Trump administration has defended him when he cries “fake news,” with everyone from spin doctor Kellyanne Conway to Sanders attacking the media while ignoring the president’s stunning propensity for untruths.

“There is a larger campaign being waged by Trump and by the White House to undermine the credibility of everybody in the news media except for certain supportive outlets,” CNN’s Jake Tapper told Conway in a testy exchange in February.

“It is very difficult to hear criticism from a White House, which has such little regard day in, day out, for facts, for truth and who calls us fake news for stories that they don’t like,” Tapper said.

“I think there are some reports everywhere, in print, on TV, on radio, in conversation that are not well-researched and are sometimes based on falsehoods,” Conway told the anchor, explaining that the administration actually has a “very high respect for the truth.”

But the message from Trump and the White House has been clear: the truth only matters when it suits them; when it doesn’t, “alternative facts” will suffice.

This is particularly apparent in the actions he forgives in himself and his associates but decries in others.

He blasts Democrats as “obstructionists,” even though Republicans’ stated strategy during his predecessor’s presidency was to “fight [Barack Obama] on everything,” according to PBS.

He spent years attacking Obama for playing golf during his time in office, but has spent a huge chunk of his own presidency hitting the links — at his own courses.

He spent the 2016 campaign bashing Hillary Clinton over her emails and her foundation, the latter of which he has described as a “criminal enterprise.” But it was revealed this September that at least six Trump officials — including his son-in-law, Jared Kushner — have used private email accounts for White House business, and his own charitable foundation has been scrutinized for apparent self-dealing and misuse of funds. (New York Attorney General Eric Schneiderman ordered the organization to stop fundraising in October 2016 and the foundation announced this month that it is shuttering.)

He tweeted in May that comedian Kathy Griffin should “be ashamed of herself” for posing with a bloody mock-up of his decapitated head, saying the gory photo shoot was “sick!”

But that hasn’t stopped him from tweeting or retweeting violent imagery targeted at Clinton and CNN.

Those tweets were, of course, part of his pattern of vicious Twitter attacks on everyone from foreign adversaries to his own attorney general. But in October, after Sen. Bob Corker responded to Trump’s attack on him by lamenting that the White House had become an “adult day care center,” Conway said it was “incredibly irresponsible” for the Tennessee Republican to speak of the president like that on the social media platform.

Given all that, it should come as no surprise that Trump lacks consistency in the way he responds to allegations of sexual misconduct.

After the allegations against Franken broke, he took to Twitter to say that the picture of the Minnesota Democrat seemingly groping a sleeping woman “really bad” and that it “speaks a thousand words.”

But Trump has stood by Moore, apparently considering a massive campaign push on his behalf ahead of the Dec. 12 special election, and has suggested in conversations with allies that he does not believe Moore’s accusers, according to the New York Times.

He reportedly sees the accusations against the embattled Alabama senate candidate as being similar to those that were leveled against him after his “grab them by the pussy” tape was made public last year.