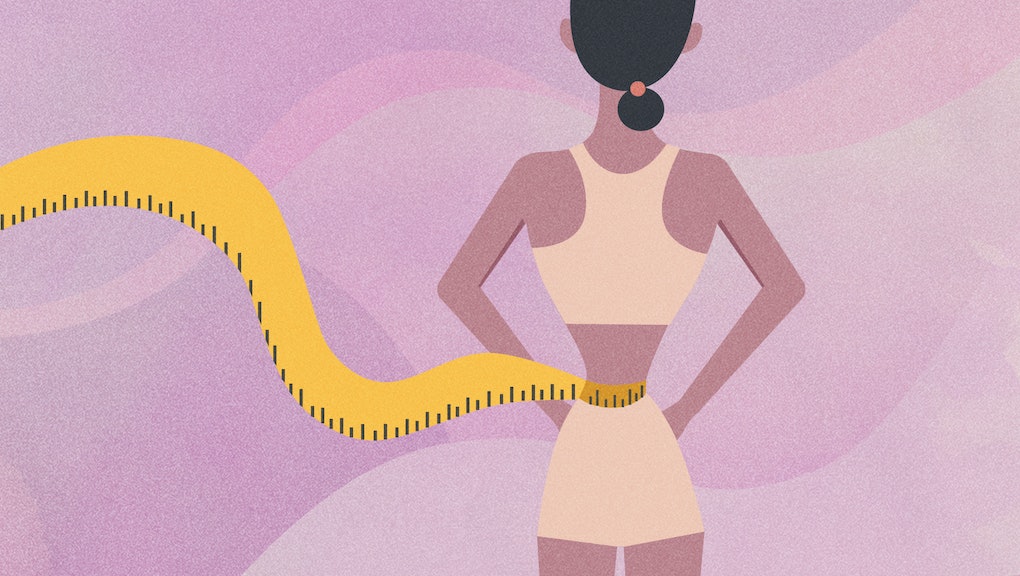 At first glance, you’d think that the #HealthyIsTheNewSkinny movement — or any of her sisters, like #StrongIsTheNewPretty — is one that we should be amped about.

After all, the implied message is that we should no longer be pushing people, and especially women, toward unhealthy weight control behaviors in pursuit of the thin ideal. Instead, we should be teaching folks that their healthy selves — those that are free of obsessive and compulsive behaviors like restricting, bingeing and purging — should be what’s celebrated.

This movement toward health as a new ideal started, in part, as a backlash to the ways in which beauty standards have been used to crush women. On the surface, by promoting health and strength over beauty and thinness, we’re asking women to refocus their time and energy into a more authentic self-improvement: taking care of their bodies and minds, and celebrating their potential. But while this certainly feels like a helpful turn in the body image landscape, a progressive and powerful alternative to self-destruction, it’s too often not.

“Health seems to be a more virtuous, less superficial goal than beauty,” Melissa Toler, a weight-neutral wellness coach, explained in an interview. “People feel more justified in adhering to rules about eating and movement when it’s in service of health.”

But think about your Instagram feed: A green smoothie topped with super foods, held by a beautiful, blonde lifestyle coach. Your favorite celebrity model promoting a teatox. Your best friend in downward-facing dog for a 30-day challenge. An ad for a clothing company selling matching yoga pants and sports bras. A video of your sister, blessed with those thighs, practicing squats at the gym.

On the surface, these seem to exhibit an awesome shift in American culture, away from the celebration of stick-thin, skeletal beauty standards — and a cure to cultural indulgence and laziness, to boot. So, you might be excited to think that times are changing.

But products being sold through deceptive advertising? Encouragements of fasting for weight loss? The popping up of brand new money-making industries? Wait a second. Doesn’t this sound familiar?

And therein lies the problem: The concept that “healthy is the new skinny” has been spun into a trend, providing both a whole new restrictive rulebook and an exciting profit venture for advertisers. It would be amazing if what was honestly being taught was balance and self-care. But too often, what are actually being pushed under the guise of “wellness” are extreme activities like clean eating (which isn’t a thing) and CrossFit (which isn’t for everyone).

Of course, throughout time, there have been people who have engaged in extreme eating and movement behaviors, whether for religious reasons or as self-induced challenges.

But the normalization, glamorization and increasing obligation of these body-based practices are suspicious, especially when our conceptualizations of health, wellness and fitness happen to look a certain way. The social performance of health behaviors — whether in the form of sporting $80 yoga pants while running errands or gabbing endlessly about your early morning workout with your personal trainer at the office water cooler — says a lot about what we value.

“I don’t think people hold health as a higher standard than beauty,” Linda Bacon, author of Health at Every Size, told Mic. “The opposite seems to be true. But what you don’t get is people willing to admit to it — and be condemned for their superficiality.”

The conflation of health with beauty is just that: superficial. Our cultural preoccupation with health isn’t really about wellness because if it was, we’d be showing off our blood pressure charts and mental health days on Instagram instead of our before-and-after gym #gains. Your tanned musculature and flexible yoga poses say little about how well you are. But they certainly say a lot about how attractive you are in a culture that’s proudly replaced “skinny” with “healthy.”

Health being used as beauty propaganda, with athleticism as performance art, is a relatively new phenomenon. Cloaked under the mask of “wellness,” it can be hard to notice that we’ve been duped into a new beauty standard.

“Health — unlike beauty, which people see as more obviously a constructed and contested standard — is falsely privileged as attainable for any body, but it quickly reveals itself as a capitalist dupe,” Caleb Luna, a doctoral student exploring colonial beauty standards at the University of California, Berkeley, said to Mic. They name “the cultural obsession with health as a specific aesthetic” as causing more problems than it solves.

But take, for instance, Wired, a technology and culture site, analyzing data from OKCupid and Match.com to explore which attributes make a person more attractive to potential suitors. Time’s conclusion? “If you’re trying to find the love of your life, it may be time to take up yoga.” For women, words and phrases associated with more responsiveness from men — that is, valued as making them more attractive — included surfing, hiking, athlete, fitness and work out.

Of course, this wouldn’t inherently be something to be concerned about — if anything, we should be excited, since fitness increases overall health — except for the fact that we also know that exercise addiction afflicts 3% of regular gym-goers, that muscle dysmorphia (an obsessive-compulsive belief that one isn’t muscular enough) is considered a subset of a psychological disorder, and that orthorexia nervosa (characterized by dietary restriction based on personal interpretations of food purity, as per health fads) might be added to the DSM-6 as an eating disorder.

Sure, we may have shifted the beauty ideal a bit, but we’ve also simply shifted the root of body dissatisfaction and the connected compensatory behaviors.

The increase of health and fitness being associated with beauty and fashion isn’t actually revolutionary. Sure, in 2016, the Miss Teen USA pageant announced that they were eliminating their swimsuit competition and replacing it with athletic wear. But isn’t that just offering same old bullshit, blended into a kale smoothie?

Offering up health as an alternative to skinniness (as if our understanding of health isn’t wrapped up in thinness anyway) isn’t an improvement. It’s simply a different unattainable standard being held over our heads.

If we really wanted people to move away from crushingly narrow ideas about beauty, we would need to do more than simply offer them a new aesthetic ideal. “We would have to honor our individual and collective humanity,” Melissa Toler told Mic. “We would have to come to the realization that we aren’t all meant to look the same.”

Swapping healthy for skinny or strong for pretty doesn’t do anything to dismantle beauty standards. It’s still oppressive, and we’re still hurting. Only now we’ve been convinced that that pain is just the burn of lactic acid buildup — and that it’s a good thing.