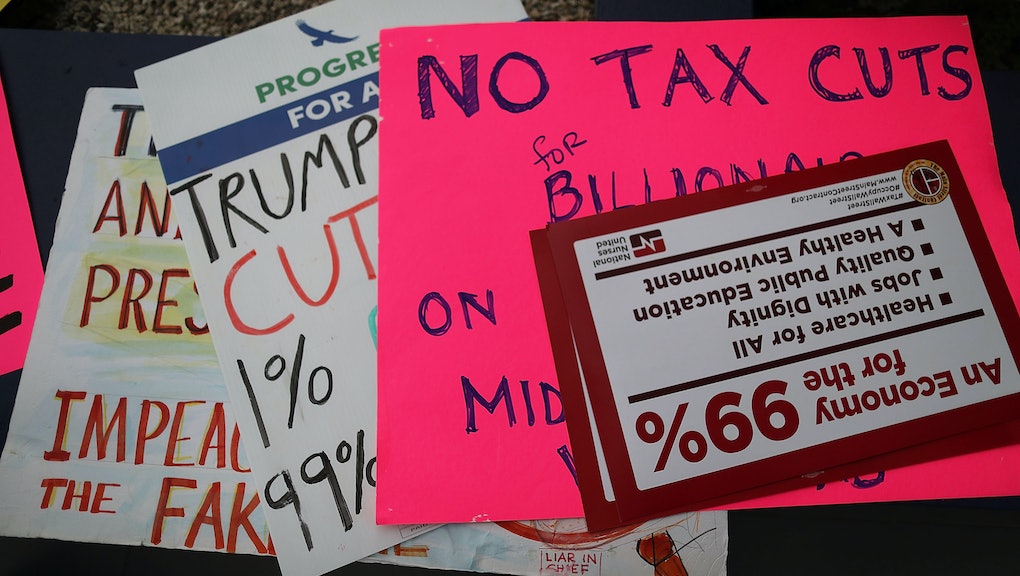 From phone campaigns to screaming street protests, Republicans are “under siege” over their tax plan

WASHINGTON — The relentless push by members of the Republican party to gut the Affordable Care Act as part of the GOP tax plan has become deeply emotional among demonstrators in the halls of Congress.

Fearful they will lose Medicaid coverage, citizens who use wheelchairs stormed Senate offices and hearings on Tuesday. Some were arrested and carried away, screaming. Children with pre-existing conditions lobbied politicians, as did people who worried they’d lose coverage for maternity care or birth control.

Those tactics from the health care fight have carried over to tax reform, where organizers say activism has been super-charged by Republicans moving to gut the ACA as part of their tax plan. Initially, they expected it would be difficult to match the energy around tax reform. But the number of people taking action to oppose the Senate tax plan, in particular, has matched or exceeded health care activism, organizers said.

Progressive leaders told Mic they saw a sustained level of political engagement from the beginning of October — when the last GOP Obamacare-repeal attempt died with Graham-Cassidy — into the past few days. In the past 60 days, there have been hundreds of events across 40 states and hundreds of thousands of messages sent to Congress in opposition to the GOP tax plan.

The transition from protesting health care to the GOP tax bill was both expected and a natural shift for activists, organizers said.

“[Groups] have understood all along that the tax fight is a health care fight,” TJ Helmstetter said. Helmstetter is a spokesman for Americans for Tax Fairness, a coalition of groups opposed to tax cuts for wealthy Americans.

Americans for Tax Fairness and Not One Penny, another organizing group opposing the Republican tax plan, built coalitions of more than 100 other groups coordinated to oppose the GOP’s tax agenda. Republicans are on the verge of passing trillions of dollars in tax cuts, largely for wealthy Americans and corporations. Many of those organizations include groups like MoveOn, Indivisible and CREDO, which mobilized to pivot supporters immediately from the health care to tax debate.

“If politicians feel like they’ll be eaten alive if they do pass something, they start looking for exits,” Ben Wikler, Washington director for MoveOn, said. This is a lesson learned from the opposition to health care — but so far, Republicans aren’t showing the fracturing under constituent pressure seen during this summer’s contentious health care debate.

Sen. Lisa Murkowski (R-Alaska) has said she’ll support the GOP tax plan, while Sen. Susan Collins (R-Maine), who has recently bucked her party, is leaning “yes.” And Sen. John McCain (R-Ariz.) this morning confirmed he’s a “yes.” Those three senators were responsible for killing the Senate’s first run at repealing the ACA in July; Collins and McCain did so again in September.

Opposition organizers say that as Republicans have changed the bill and moved it closer to passage, resistance among the electorate has ramped up. And with the bill up for a vote as soon as Thursday, they expect opposition to crescendo this week. Since Monday, CREDO members alone have made 31,000 calls to Congress. Hundreds of anti-GOP tax plan events have been held in the past few days.

“It essentially feels like you’re under siege,” Murshed Zaheed, political director of CREDO, said of the lawmakers being targeted.

When GOP senators announced on Nov. 14 they would repeal the ACA’s individual mandate to save more than $300 billion, it drew health care groups back into the fight. The Congressional Budget Office estimates 13 million fewer people would have health insurance within a decade without the mandate.

“Painting the picture that the stakes are high because the bill affects everybody is the lesson we’ve taken from the health care folks,” Tim Hogan, spokesman for the Not One Penny coalition, said. The name of his coalition calls for “not one penny” in tax cuts for wealthy Americans, which the groups say would come on the backs of seniors with fixed incomes and those who can least afford them. The GOP plan would give wealthy Americans billions in tax breaks.

“At their own peril, Republicans have turned [the tax debate] into a health care debate,” Hogan said.

Support from health care groups — battle-hardened from months of fighting ACA repeal efforts — has been critical, Hogan and Helmstetter both said. But the partnership is natural, Brad Woodhouse, campaign director for Protect Our Care, said. His group spent millions of dollars defending the ACA — and has put six figures into ads in the past two weeks to defeat the tax legislation.

And while that coordination has been key, it’s no less important than the continued engagement of members from health care into taxes.

TownHall Project, a group that helps people find town halls with members of Congress, said more than 200 people attended a town hall meeting with Sen. Jerry Moran (R-Kansas) on Nov. 22 to talk taxes. In Oklahoma, an Indivisible group waited 90 minutes to meet with the staff of Sen. James Lankford (R-Okla.)

“That is a lot harder to do than donate and give $20,” Angel Padilla, policy director of Indivisible, said, arguing grassroots activity all year has revolved action. Indivisible groups have held more than 200 events — 93 on Monday alone — since October to rally against the tax plan, he said.

“That’s on par with what we were seeing on health care,” Padilla said. “We’ve seen a sustained energy to fight back these bills.”

Given the bill’s unpopularity among the electorate, the level of opposition is in some ways unsurprising. Nearly half of Americans oppose the plan, according to a Reuters/Ipsos poll, while only 22% support it. Fewer than 10% say the middle class or low-income Americans would “benefit most” under the tax plan, while more than half say large corporations or the wealthy would fare best.

In a reflection of the legislation’s real life impacts, over 60 events were held Wednesday for grad students to protest the bill’s tax on graduate university tuition.

A CBO report saying the GOP tax plan would harm middle-class Americans has made it easier to increase engagement in the tax issue. This week, organizers said they have seen a spike in protests and messages to Congress as the Senate plan moved toward a vote, and the CBO said low-income Americans would lose money under the plan.

While the Senate tax bill would make sweeping changes to the U.S. tax code, the fact it would change health policy while impacting higher education, families and other topics has motivated opposition. The legislation’s impact on nearly every part of the American economy has made it far easier to attack, organizers said.

Not One Penny has spent more than $5 million on television ads in the past 60 days attacking the tax plan. The bill’s scope made it easy to tailor attacks for each state, Hogan said. One TV spot targeted southern California Republicans differently than an ad focused on Sen. Collins in Maine.

Opponents of the Senate bill hope to spike constituent outrage this week. Outside the Capitol on Thursday afternoon, activists will stage a 24-hour protest and aim to yell loudly enough to be heard in the Senate chamber — as they did during the health care debate. This weekend, Sen. Bernie Sanders (I-Vt.) will make stops in Pennsylvania, Ohio and Kentucky to rally working class voters against the plan.

“The level of furious opposition creates the background conditions for the inside negotiations,” Wikler said. “You don’t need to get legislators to actively oppose it. You just need to get them to refuse to reach a compromise they can all agree with.”