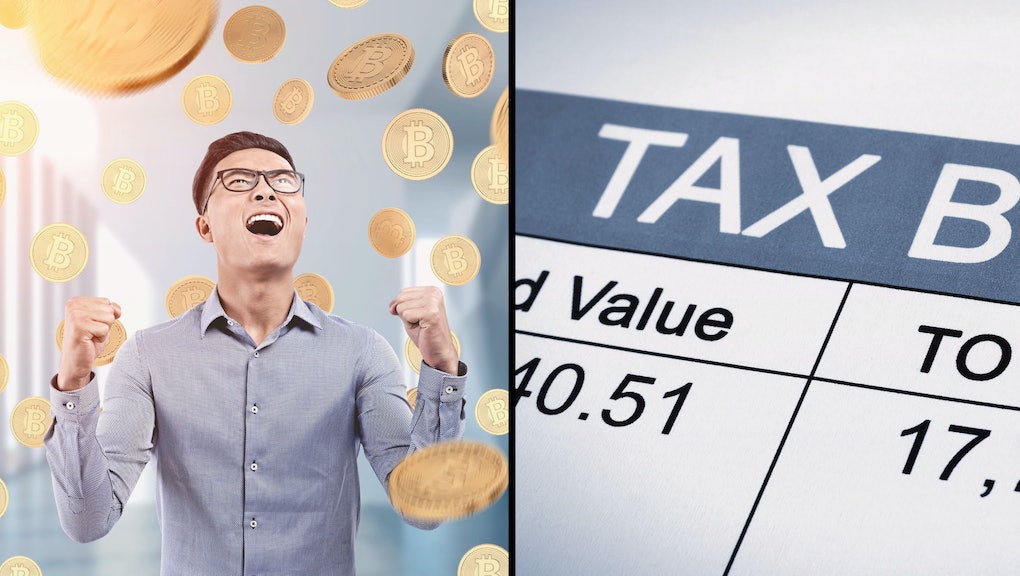 Tax on bitcoin? Here’s whether you need to pay capital gains taxes or not.

After breaking record after record, bitcoin’s year-long rally let out some steam on Thursday, losing 20% of its value in just 24 hours, as Reuters reported. Still, bitcoin is ten times more valuable now than it was in January, and just keeps growing in popularity — skeptics, volatility and scams notwithstanding.

Of course, if you’ve gotten lucky enough to make a killing off the cryptocurrency rally, there’s still a little bad news.

Just like other types of income, the cash you earn from selling bitcoin for a profit isn’t all yours: Uncle Sam wants a cut and considers your bitcoin to be taxable, according to the Internal Revenue Service.

Indeed, the IRS has begun to crack down, and on Wednesday, a federal judge ruled that San Francisco-based cryptocurrency exchange Coinbase would need to comply with the agency’s demands — turning over the records of about 14,000 traders to the government. Why?

From 2013 through 2015, less than 900 people reported bitcoin profits to the IRS — even though about “14,000 Coinbase users have either bought, sold, sent or received at least $20,000 worth of bitcoin in a given year” during that period, according to a court document filed by the feds. That suggests “many Coinbase users may not be reporting their bitcoin gains.”

Concerned you might get in trouble? While you’re unlikely to need to worry if your bitcoin transactions are small — specifically, less than $600 — here’s how you can figure out if you owe anything (and what you owe) for sure.

How to find out if you owe tax on bitcoin

There a few scenarios in which you might owe tax on your bitcoin or other cryptocurrencies. “The way it’s taxed depends on the way it’s used,” Lisa Greene-Lewis, a certified public accountant with TurboTax, said. “There are employers paying their employees in bitcoin, [and] if that’s the case, you report it as if it were your earnings.”

That’s fairly simple — but “bitcoins that are held as an asset will be taxed as a capital asset, just like stocks,” she said.

If you’ve never dealt with capital gains before, the gist of it is that when you sell an asset for a profit (aka “gain”), whether it’s a stock, a bond or bitcoin, you need to pay the government a percentage of the money you made off the sale.

As with personal income tax, the amount of tax you pay under capital gains depends on your income, though the rates are all significantly lower: The top rate for the capital gains tax is typically 20%, compared with 39.6% for the top income tax bracket.

One especially tricky tax wrinkle kicks in when you use your bitcoin to buy goods or services.

In the government’s eyes, as the Balance and Money reports, bitcoin is property, not money — so purchasing with it constitutes two transactions: A sale of property and then the actual purchase. That means you need to pay any applicable capital gains tax, because you’re technically selling property first, even though it feels like you’re just paying for a pizza.

Finally, if you mine bitcoin, you’ll also need to report that income to the IRS, according to TurboTax.