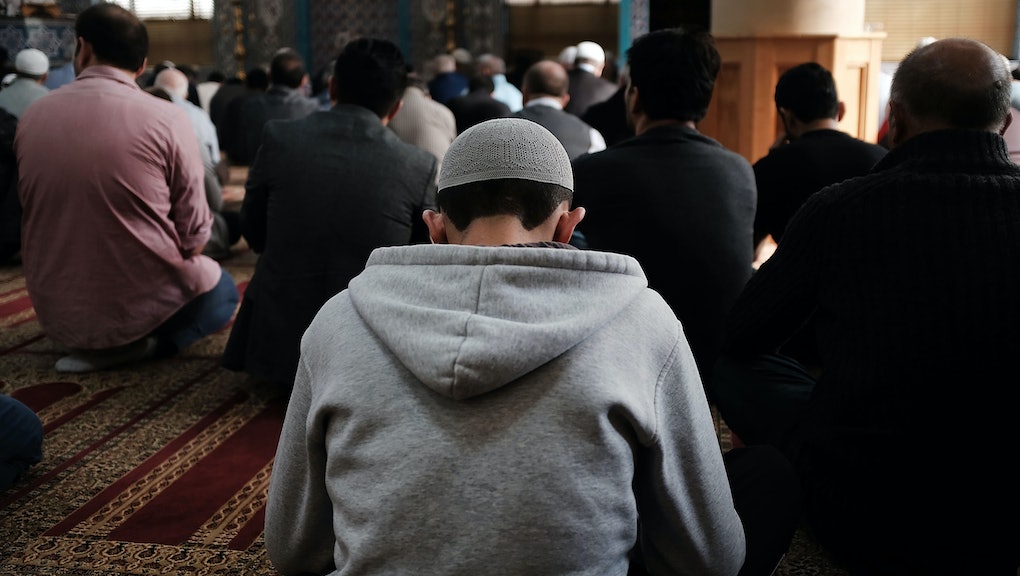 Mikael Abdul-Kariem has been living with HIV for almost half his life. The 66-year-old, who said he contracted the virus by sharing needles while he was addicted to drugs, wasn’t born a Muslim, but converted to Islam in prison in 1990.

Kariem, who now lives in Rochester, New York, tells his story without hesitation, even though the subject of HIV and AIDS is still considered taboo in much of the Muslim community.

“In those days, HIV was equal to a death sentence,” Kariem said. “When I went to my local masjid [mosque] and told [the congregation] about my HIV status, I was shunned and ostracized. I don’t want anybody to go through what I went through in the 90s.”

Mosques in the U.S. tend to double as community centers for Muslims, where imams become de facto counselors who help congregations deal with private affairs such as domestic violence, divorce and bullying.

The role of an imam hasn’t changed much in the U.S. over the past few decades, so recently, a few imams and other community leaders are now working to dismantle the stigma around HIV and AIDS to encourage Muslims to get tested and seek support without any fear of judgment.

“People are fearful of AIDS because of their ignorance,” Kariem said. “I have met people who don’t want to touch me or stand next to me in salah [prayer] but it doesn’t bother me anymore.”

Kariem is one of an estimated 1.1 million people infected with the HIV virus in the United States, according to the Centers for Disease Control and Prevention. Even though the number of new infections has declined in the past few years, nearly 40,000 Americans were diagnosed HIV positive in 2016.

No data on HIV and AIDS specific to the Muslim community is available in the U.S., but experts say that black and Latino gay and bisexual men are at the highest risk of infection. Out of over 3 million Muslims living here, about 20% identify themselves as black, according to the Pew Research Center.

Today, on World AIDS Day, the Mosque of Islamic Brotherhood in Manhattan will be addressing HIV and AIDS in their Friday sermon, while the Muslim Women’s Institute for Research and Development is coming together with the Latino Commission on AIDS to remember all those people who have lost their lives to the disease.

Experts say that many in the community — especially the older generation — still consider HIV and AIDS a death sentence. The U=U campaign, which stands for undetectable equals un-transmittable, shows that if a person continues to stay on their medication and maintains an undetectable HIV viral load (as in, the amount of the virus in their blood) for at least six months, they have nearly a 0% chance of passing on the disease sexually.

RAHMA (“mercy” in Arabic), one of the few nonprofits dedicated to creating awareness about HIV and AIDS in the Muslim community, said ignorance and denial are the two major factors holding Muslims back from understanding, treating and preventing HIV. And older generations’ disregard toward becoming informed can be passed down.

“I was removed from sex ed classes in school because my parents felt it was inappropriate information,” Khadijah Abdullah, executive director of RAHMA, said. She added that this is the case for many Muslim students.

“When I was in high school, an HIV-positive person came to our school to give a talk, and I felt disgusted by this person,” she said. “I thought I would contract the virus by just breathing the same air.”

Years later, Abdullah decided to set about remedying this sort of ignorance by organizing a retreat for HIV-positive Muslims, which took place in 2016. She said 15 people joined her team in Washington, D.C., to receive support and learn how to cope with isolation and stigma.

At the retreat patients learn about self care and yoga, and they gain a network of friends. They’re also offered mental health counseling, and access to health care professionals, who provide them with information on how to stay healthy and avoid spreading the infection by practicing safe sex.

Abdullah realized early on that she needs to be creative in getting her community to attend HIV events — only two people showed up at the first HIV testing event she organized at a local mosque in 2012.

“The next time I partnered with a masjid, we worked with their health committee and we had testing on site and that attracted a decent number of people,” she said. To engage the Muslim youth, she also organized a talent show. During the intermissions, her team would give out HIV statistics and information on how to stay safe.

“We didn’t advertise it as an HIV event but instead called it a talent show so that more people would come,” she said, adding that RAHMA mentioned in its advertisement that HIV testing would be available on site.

The number of attendees at the retreat grew to 30 this year, and next year, Abdullah said she anticipates more will join. RAHMA also runs a youth education program where they teach sex education to young Muslims in the Washington area — even though Islam recommends an abstinence only approach.

“We incorporate Islamic teachings in our sex ed classes, but we also teach them how to use condoms,” Abdullah said.

Maryam Laiyemo has been a peer educator at RAHMA for nearly two years. She teaches young Muslims about safe sex, contraception, sexually transmitted infections and how to negotiate with your partner to get tested before marriage.

All of this is done with an Islamic context and keeping things culturally relevant, Laiyemo said.

“My parents talked to me about puberty and sex long before I got there, which stopped me from getting experimental and indulging in risky behaviors,” she said.

“The younger generation is ready to talk about HIV and AIDS,” Laiyemo said, adding that “Muslim youth are way more receptive to information when compared to the older people in the community who think that HIV and AIDS is not a Muslim issue.”

T.A. Bashir, a professor at the New York Theological Seminary, said he agrees, adding that HIV exists in his community just like any other.

“Many kids out there are experimenting with sex and drugs and the parents don’t want to face it,” Bashir said. “People tell me, ‘How come you are talking about condoms and oral contraceptives?’ But my response is, ‘You are already having sex, but I want to make sure you are safe.’”

Muslims are not alone when it comes to stigmatizing and lack of information regarding HIV and AIDS. Data suggests that about one in seven people in America is unaware of their HIV-positive status, regardless of their faith.

Sultana Ocasio, executive director of Muslim Women’s Institute for Research and Development in the Bronx, said Muslims are too ashamed or embarrassed to be tested at the mobile vans that travel around the city offering free screening. So she distributes information guides on HIV to Muslims in New York. Last July, she distributed around 100 testing kits at a health symposium. In the future, she plans to take more kits to college campuses, where she educates young men and women about AIDS and HIV.

Ocasio said that Muslims are shifting their views on HIV and AIDS.

“People are realizing that it is not just a white gay man’s disease,” she said. Still, she added, “Many Muslims believe that you can get the virus only if you have done something haram.”

Haram means impermissible in Arabic. Muslims are supposed to follow the rules laid out in the Quran, which declares premarital sex, drugs and homosexuality haram. Ocasio said this makes many Muslims assume that HIV and AIDS only affect non-Muslims.

“Many women get it from a spouse and have no idea that their husband is HIV positive,” she added.

Perhaps because the subject is so taboo, Abdullah said people from her community often ask her why she advocates for HIV education.

“Some of the leaders in our community shame and publicly embarrass the HIV-positive people instead of healing them,” he said.

Laiyemo said that faith leaders need to change their attitudes toward people with HIV and bring about a real change through education. “During Ramadan [the month of fasting], it got out that one of the person serving food at iftar [when Muslims break their fast] is HIV positive, and the mosque threw away the entire food,” she said.

“Many people in the community still don’t know that you can’t contract the virus through kissing, hugging or eating food together,” she added.

Abdul Aziz, a young imam from Brooklyn, said he recognizes that some imams shy away from discussing HIV. He does not.

“Many imams are not trained to handle subjects like HIV, and therefore don’t know how to discuss it at their mosque,” he said.

Aziz said that most couples who approach him to officiate their wedding are unaware of their medical history, and that it can be too late by the time they find out that their spouse is HIV positive. HIV advocates in the Muslim community have repeatedly seen women getting infected with the virus because of their husband. None of the women knew their husband was HIV positive, leaving them feeling cheated. Aziz said he wants to change that, and that he and a few other imams have introduced pre-marital HIV testing to anyone who wants to get married at their mosque. Apart from HIV, couples get tested for STDs and other chronic illnesses.

Aziz and a few other imams in New York have now come together and made it mandatory for their congregation to be tested for the virus before being allowed to get married.

“I don’t get people married unless the couple is completely aware of their medical history,” Aziz said. “We are doing this to ensure that both parties are safe and know everything about the person they are going to spend their life with.”

Carol Tyrell, coordinator of the Faith Communities Project that brings Christian, Muslim and Jewish faith leaders together, helps imams come up with initiatives like pre-marital HIV testing. She said she works with nearly 10 Islamic institutions in New York to raise HIV/AIDS awareness in the Muslim community through workshops and trainings on HIV testing and safe sex.

“We don’t want people to walk away from our meetings and think this is a Christian or a Muslim or a Jewish issue,” Tyrell said. “We want them to realize that HIV and AIDS affects us all.”