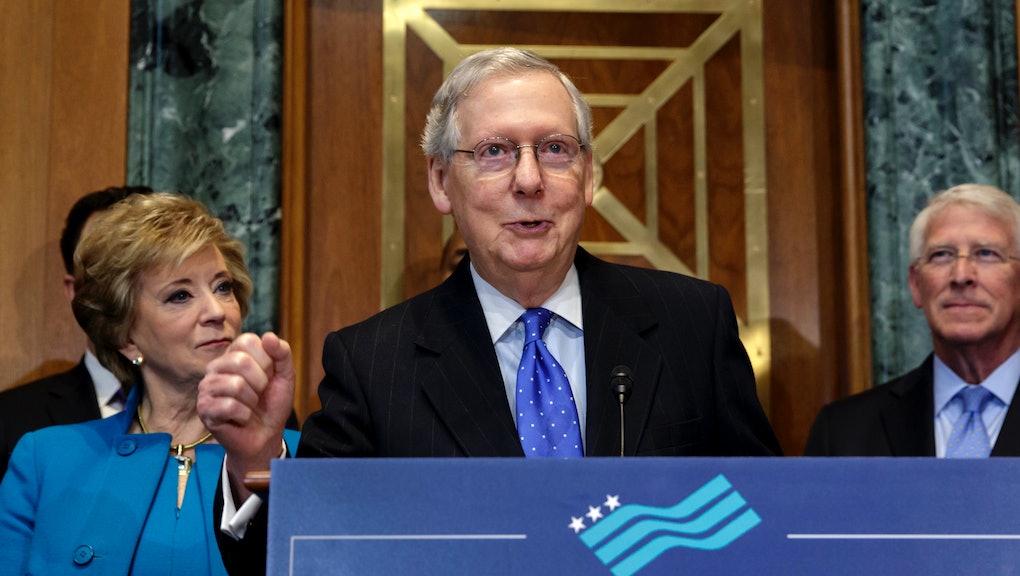 WASHINGTON - A core selling point of the Senate tax plan is the same one Republicans have made for decades: Cut corporate taxes, and companies will hire more employees. Several Republican senators repeated that talking point Thursday as they moved toward a final vote on their tax plan.

Only one of six Republican senators offered a specific example of how a corporate tax cut would increase employment. In interviews with Mic, Republicans said broadly that slashing the corporate rate would create jobs but most demurred on offering specifics. Senators also argued that corporations giving tax savings to shareholders would benefit workers — a move disputed by economists.

Studies have shown cutting the corporate tax rates brings little improvement in wages for workers. And CEOs have not cooperated with Republican claims that large companies will hire more workers if the tax plan passes.

In an embarrassing moment for White House Chief Economic Adviser Gary Cohn earlier this month, only a few CEOs raised their hands when asked if they would increase investment if the corporate tax rate is cut to 20%.

“Why aren’t the other hands up?” Cohn asked.

Leading American technology, drug and food companies have said they will plow savings from lower taxes into gains for shareholders. “We’ll be able to get much more aggressive on the share buyback,” Kelly Kramer, the chief financial officer of Cisco, said Nov. 16.

When told CEOs have said they’ll use tax savings to financially benefit shareholders or themselves, Republicans still argued those actions would benefit workers — or said such business leaders are in the minority.

“I think that’s a minority opinion based on the CEOs I’ve talked to and the surveys I’ve seen,” said Sen. John Kennedy (R-La.) “And number two, there’s nothing wrong with share buybacks and dividends. It puts money in people’s pocket.”

A share buyback increases cash in the pockets of shareholders by making the company more valuable. It doesn’t directly benefit workers.

When asked which CEOs told him they’d hire more workers, Kennedy hopped in a Senate train car and said: “That’s all I’ve got to say. I’ve got to go.”

Sen. Jeff Flake (R-Ariz.), a Republican with concerns about how much the tax bill would increase the deficit, believes the corporate tax cut is critical to the bill’s positive impact.

“Lowering the corporate rate will help everybody,” Flake said. “It will help the economy in general.”

Sen. Jim Inhofe (R-Okla.) said Mic should ask Republican members of the Senate Finance Committee for examples of companies that would hire workers because of a corporate tax cut.

“I would assume most all” industries would see job creation, Inhofe said.

When asked how a corporate tax cut would create jobs, Sen. Lamar Alexander (R-Tenn.) said the CEO of FedEx Frederick Smith told him Wednesday that with passage of a corporate tax cut his company would be able to hire “thousands” of workers to build planes.

“Federal Express would expect to invest three-quarters of a billion dollars in buying airplanes and creating thousands of new jobs in the United States,” Alexander said. He added that allowing FedEx to deduct the cost of a new airplane from its taxes was key to job growth.

On Thursday, Republicans were confronted with a nonpartisan analysis from the Joint Committee on Taxation on their tax plan. The analysis said the plan would lead to lower economic growth than is already projected for the next 10 years. Tax cuts would generate more than $400 billion in tax revenue — but would still leave the federal government with $1 trillion in debt over the next decade.

As they did with earlier reports that were negative about their bill, Republicans dismissed the new analysis as incorrect. Sen. Susan Collins (R-Maine), a Republican followed as a barometer of whether legislation has a chance of clearing the Senate, said she does not believe the JCT analysis is accurate.

“What I’m told is they used as a baseline, 1.9% GDP growth,” Collins said. Asked if she thought the analysis was right, she said “No” as an elevator door closed and Collins headed up to the Senate floor.