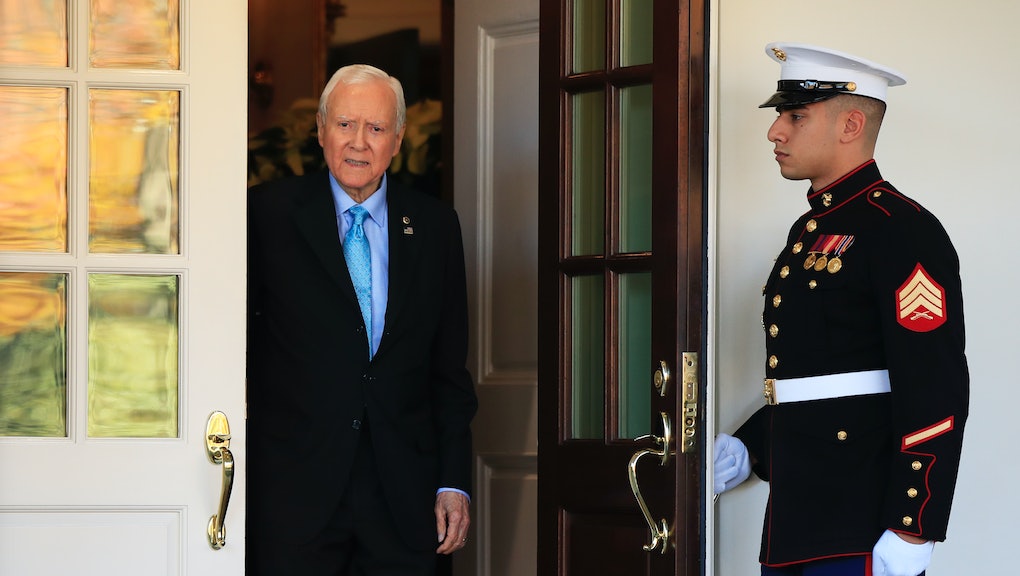 Less than two days after the Senate passed widely criticized tax reform legislation, one of the tax bill’s key proponents came under fire for claiming there’s no money for a children’s health care plan he helped create.

On the Senate floor Thursday, Sen. Orrin Hatch (R-Utah) responded to a question from Sen. Sherrod Brown (D-Ohio) about the future of the Children’s Health Insurance Program, a low-cost health insurance plan for children from low-income families that Congress has yet to renew since it expired Oct. 1.

The question came during a debate on the Republican tax bill, which Hatch presided over as chairman of the Senate Finance Committee.

In response, Hatch claimed the health insurance program had not been renewed due to a lack of funds.

“The reason CHIP’s having trouble is because we don’t have money anymore,” Hatch said.

Though Hatch described CHIP as having done a “terrific job,” he then used the entitlement program as an opportunity to criticize programs that “help people [who] won’t help themselves” — seemingly appearing to equate such people with the 9 million children that rely on CHIP.

“I have a rough time wanting to spend billions and billions and trillions of dollars to help people who won’t help themselves, won’t lift a finger and expect the federal government to do everything,” Hatch said.

The senator ultimately vowed the Senate would renew funding for CHIP.

Hatch’s comments, which were highlighted on MSNBC’s website and mentioned on social media Sunday in a now-deleted tweet from Morning Joe host Joe Scarborough, drew widespread criticism over the weekend as passage of the Senate tax bill continued to spark outrage.

Others pointed out that Hatch was generally supportive of CHIP and that his most fiery complaint concerned other government programs that, in the senator’s estimation, take resources from the children’s insurance program.

Many considered the senator’s apparent criticisms of CHIP recipients — and his assertion the government did not have money to fund health care for underprivileged children — distasteful, especially considering the tax breaks for corporations and wealthy Americans included in the Senate legislation. MSNBC noted the bill will cost taxpayers approximately $1.5 trillion — including tax exemptions for owners of private jets and wineries, among others — while CHIP costs $15 billion, just 1% of the tax bill’s price tag.

Though he did say he would “see that [CHIP] gets through,” Hatch’s decision not to take immediate action to renew CHIP felt all the more incongruous given his history with the children’s health program. Together with Sen. Edward Kennedy, Hatch helped to create CHIP in 1997, with the New York Times reporting he was described at the time as a “latter-day liberal.”

When announcing his support for CHIP in 1997, Hatch said the nation had “a moral responsibility” to provide for the vulnerable children covered by CHIP, the New York Times reported, and said he was voicing his support for the bill to prove the Republican Party “does not hate children.”

“Children [without insurance] are being terribly hurt and perhaps scarred for the rest of their lives,” Hatch said in 1997, as quoted by the Times.