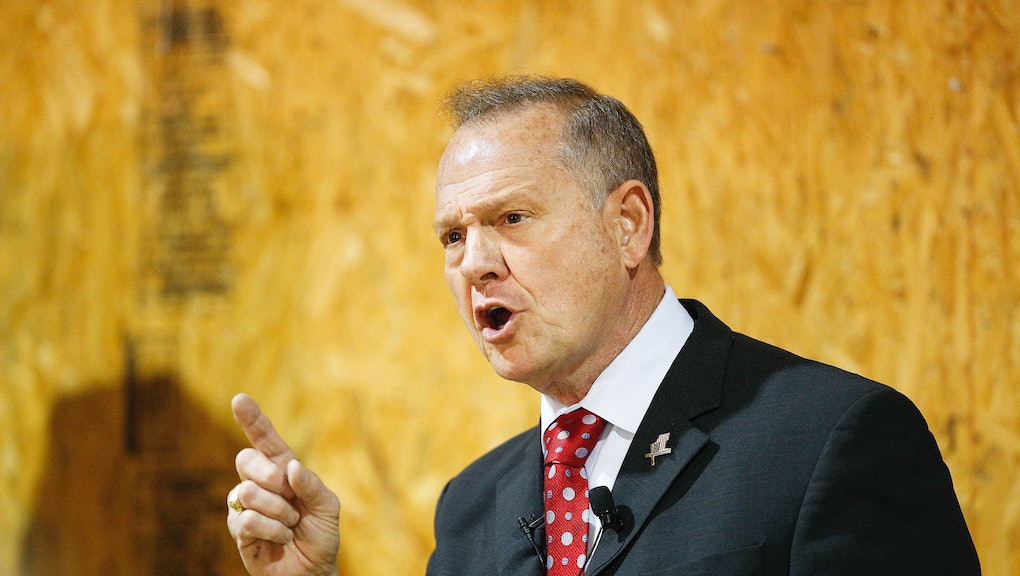 “Democrats’ refusal to give even one vote for massive tax cuts is why we need Republican Roy Moore to win in Alabama,” Trump tweeted Monday. “We need his vote on stopping crime, illegal immigration, border wall, military, pro life, V.A., judges, Second Amendment and more. No to Jones, a Pelosi/Schumer puppet!”

In a follow-up tweet, Trump would attack Doug Jones, Moore’s Democratic opponent, as a puppet of congressional Democrats.

“Putting Pelosi/Schumer liberal puppet Jones into office in Alabama would hurt our great Republican agenda of low on taxes, tough on crime, strong on military and borders... and so much more,” Trump warned. “Look at your 401ks since election. Highest stock market EVER! Jobs are roaring back!”

After the tweets, Trump called Moore to tell him that he was endorsing him over the phone.

“Go get ’em, Roy!” Trump told Moore, according to Moore’s account of the phone call.

“The President had a positive call with Judge Roy Moore during which they discussed the state of the Alabama Senate race and the President endorsed Judge Moore’s campaign.” Principal Deputy Press Secretary Raj Shah told reporters aboard Air Force One on Monday.

Trump’s explicit endorsement of Moore comes one week before the Dec. 12 special election in Alabama. Trump had danced around endorsing Moore in the wake of Moore’s scandal, finding creative ways to justify why Republican voters in Alabama should cast a ballot for a man facing credible allegations of abusing children, as opposed to Doug Jones.

After the allegations of sexual misconduct surfaced, Moore plummeted in the polls and Republicans ran away from his candidacy, with some calling for Moore to either drop out of the race or, if he won the election, for Moore to be expelled from the Senate.

But Moore has since rebounded in the polls, and Republicans who once issued tough talk against Moore now seem to be okay with having him in their ranks.

That includes Senate Majority Leader Mitch McConnell, who, despite once saying that Moore should drop out of the election, has now flipped his stance, maintaining that Alabama voters should decide whether or not Moore deserves the Senate seat.