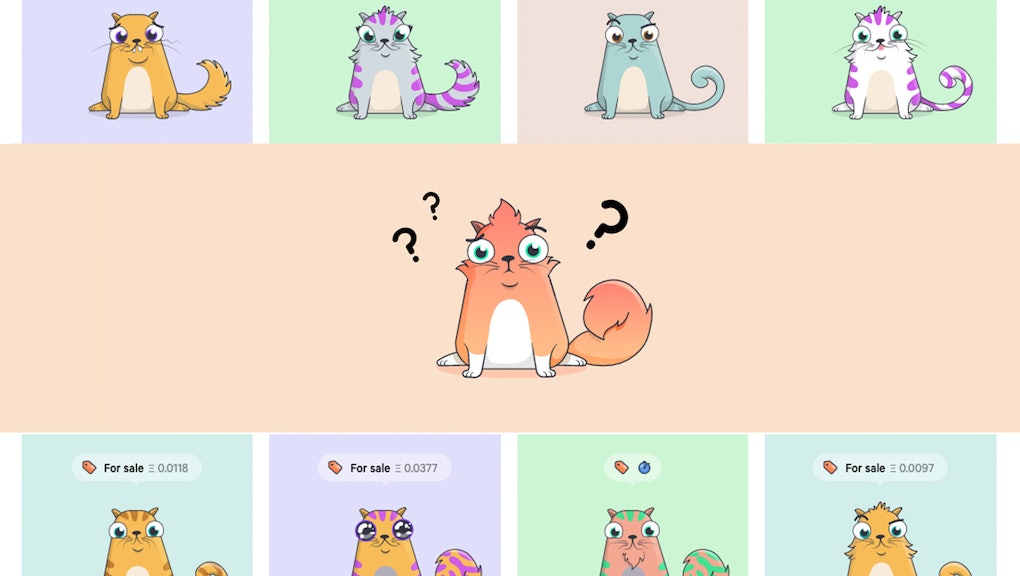 It’s called CryptoKitties, and the concept itself will be relatively familiar to any Neopets or Pokémon fans in the house: It’s an online marketplace for breeding, buying and selling virtual cats. Some of them are striped, some are green, some are purple, none of them are live animals and they all cost very real amounts of money.

The CryptoKitties site describes them as “digital toys that are D.T.F.”

The most expensive kitty so far was purchased for the equivalent of $117,712.12. The average price per cat is much more reasonable — relatively speaking, anyway — at $109.64. So far, the equivalent of over $3 million has been exchanged, according to a third-party site that tracks what’s bought and sold.

The twist here is that the whole CryptoKitties marketplace is mediated by the Ethereum blockchain.

Put simply, “ether” is a new kind of currency, like the dollar or the euro or the peso. Anyone can buy ether online. But what makes ether — and all other cryptocurrencies, like Bitcoin — revolutionary, is that it’s all moderated by “blockchain” technology, which allows for monetary trading without the use of a third party, like a bank. Blockchain’s uses aren’t limited to cryptocurrencies, but that’s been one of its more visible applications thus far.

As some have noted, the strain that CryptoKitties is imposing on the Ethereum network is raising concerns about the viability of the network as a whole. If a game for tradable cats can bring the network to a halt, clearly some more work is needed before it’s considered a viable, trustworthy platform for the big stuff.

If you’re looking to help contribute to the breaking of Ethereum and hop on board the CryptoKitties train, you’ll need to closely inspect the site’s FAQ page. There are quite a few steps — making a MetaMask account, buying ether, figuring out what the hell a blockchain is — you need to complete before jumping in.