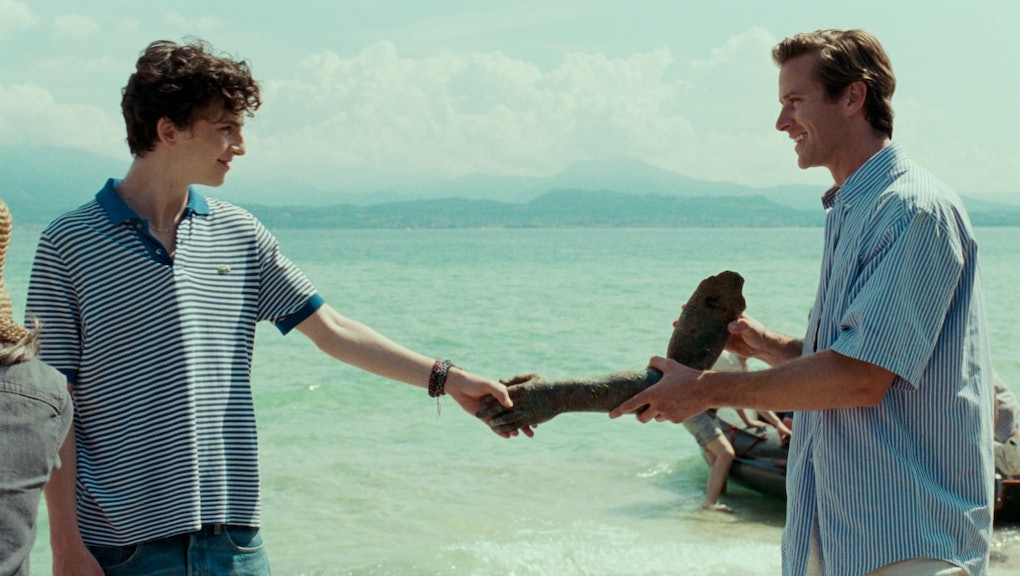 ‘Call Me By Your Name’ isn’t groundbreaking, so why are we so charmed by it?

Call Me By Your Name is an unusual movie about same-sex desire. Perhaps this is because it is void of camp, gratuitous six-packs, or overt political statements, or perhaps because its attempts to transcend sexual identity render it more accessible to tolerant straight audiences. But it is not an unprecedented kind of film, falling somewhere among the ranks of Andrew Haigh’s Weekend (2011) for the former reason and 2016 best picture Moonlight for the latter.

For queer viewers, at least, what sets it apart is the mirror it holds to our own early forays into same-sex attraction, which necessarily transcended sexual identity (that is, straightness). Watching the film feels something like a séance, in which a theater packed with gay men silently conjure our respective ghosts of adolescent longing, those objects of nascent gay desire and heartbreak through whom we have hardened into slightly less breakable people. Of course, being relatable is not sufficient to make a story significant, or even good.

Perhaps inadvertently, though, the film probes at something more buried within gay life, not simply at our memories, but at our most frustrated fantasies of loving on both queer and equal terms.

Based on the 2007 novel by André Aciman, Call Me By Your Name revolves around Elio (Timotheé Chalamet), a 17-year-old boy in mid-‘80s provincial Italy, and his increasingly desperate fixation on his family’s summer houseguest, an extremely charming but largely enigmatic 24-year-old American classics scholar named Oliver (Armie Hammer). After months of ambiguous interactions, Elio’s hopeless crush turns out to be perfectly reciprocated and consummated to original music by Sufjan Stevens, until each must inevitably return to their own respective lives at summer’s end.

When asked by Mic at the film’s New York premiere, its stars agreed that to call the film “groundbreaking” would be an overstep, with Hammer describing the story as in fact archaic, “one of the oldest stories that we can tell, of two human beings falling in love.” When asked to situate the film in our contemporary political climate, Chalamet stayed on message, describing it as “an unabashed celebration of love.”

Aciman’s original novel is actually not all that concerned with love’s universality, but with its maddening quality, love’s magnification of every gesture into melodrama. Aciman’s ability to simulate the teenage inner voice’s petty agony is the novel’s greatest strength, and his book is something of a Proustian treatment of Catcher in the Rye, though without the prosaic finesse of either. The film, however, supplants Elio’s agony with a more charming and compelling restlessness, his turbulent inner world depicted through fidgeting in a small bed and concerned glances at a wristwatch.

James Ivory’s screenplay is otherwise very faithful to its source material, with most of its key dialogue reproduced verbatim, including Elio’s climactic admission of his feelings to Oliver — wherein he never actually states his feelings at all. This occurs throughout the novel, an avoidance of naming desire, disease, or even bodily fluids for what they are, and this refusal to call things by their name carries through to the film.

To be more specific, the word “gay” only graces both the novel’s and screenplay’s pages once, in reference not to the main characters, but to a couple who joins the family for dinner. In the film, Elio playfully refers to them as “Sonny and Cher,” and his father reprimands him for the remark. The funny gay couple stands in contradistinction to Elio and Oliver, who do not even consider that their romance might say something about their sexualities or personhood, the story’s greatest break from its obedience to naturalism. Its stars, when speaking with Mic, were quick to reiterate the universality of love, not its specific gay inflections, but its grand humanness.

It has already been noted that CMBYN is not, in fact, a “gay” romance, and that the straightness of its author and lead actors demonstrate a failure of representation politics to get both queer stories told and queer people hired. Yet this is what makes the film even more unusual, that in spite of all questions of authenticity, it has managed to make plenty of thoughtful, critical gay people submit to its appeals. It possesses a curious appeal, perhaps not in spite of its refusal to identify gayness, but because of it.

The film has received praise for presenting queer desire innovatively simply by doing it non-tragically. Elio’s parents are not only supportive, but downright facilitative. His almost-girlfriend is understanding, his health is unscathed, and his maid makes him latkes. And most importantly, he gets to enjoy gay love and sex without a gay identity crisis. Perhaps this is what makes the film feel so groundbreaking to many of its viewers, that it is a profoundly relatable emotional landscape set in an entirely fantastical social and material landscape.

It calls upon the tragic youthful yearning that is essential to “the queer experience” and offers a comforting revision of events, one in which we get the love we wanted, even if just for a few paradisal weeks. It offers us a kind of utopia — a utopia of love. It is, however, an unimaginative utopia, because it can only conceptualize fulfillment of same-sex desire by situating it in a social and historical vacuum, a world without identities, without rejection, and without disease. It is a world in which culture, history, or community could not possibly salvage queer desire as worthwhile, only love and its complete reciprocation. It is a love-utopia wherein not only are sexual identities irrelevant, but even personal identities are interchangeable.

This is a message we receive from romantic media all the time, a narrative that, like Hammer says about the film, “feels like a story as old as time.” But it is a message we as queer people may be prone to internalize differently from others, a longing we wrestle with more viciously because we are charged by society with embodying love’s universality, with demonstrating love’s great purity in order to legitimize even our trivial desires.

Of course, there is nothing wrong with a few hours of fantasy and wish fulfillment, and I do not mean to suggest that the film is harmful to gay viewers. But the popularity of Call Me By Your Name suggests that it marks a gay cultural moment, a moment that is definitely post-Windsor and yet hangs in the odd limbo of not quite deciding what the next great movement battle might be.

We have witnessed a historical movement take on the task of culturally and politically redefining “gay” not in association with death, but with love, and succeed in that task. But when loving and being loved are now requisite to our personal identities, and when our political optimism rests on being the lovers who must trump the haters, we also find a terrifying, taboo hollowness carried around by gay people who cannot seem to find the love that we won the right to. Call Me By Your Name, by writing over those initial wounds of rejection or fear, might empower us to reckon with our more recent ones. But it might also deflect from them.

Perhaps the resonance of the film is not simply that it is relatable, but that it offers a sensitive and optimistic answer to gay men’s most troubling anxiety about what our lives are meant to be after “it” has supposedly gotten better. Elio’s perfectly fulfilled infatuation for somebody of the same sex feels like a salve to what is often unfulfilling about gay life, that because our communities lack the capacity to care for everybody all the time, our calls to connect within the lines of sexual identity often go unanswered.

Call Me By Your Name answers a tentative and somewhat cynical wish to transcend identity, history, and politics — all bastard children of our own marginality — and that once we do, falling in love might be easier. This is not an especially creative, radical, or liberatory fantasy, but it is an undeniably common one.