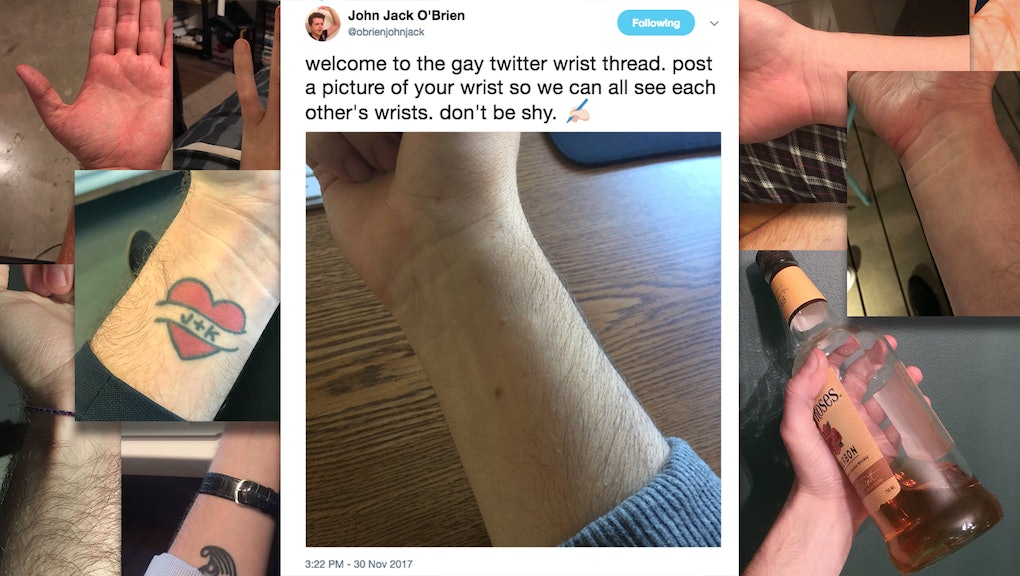 Gay Twitter — a slang term describing a loose community of queer men who interact regularly on Twitter — is a messy, beautiful place. And, like outer space, its exact bounds aren’t really clear. It’s hard to point to the exact moment you’ve escaped the amorphous atmosphere protecting normie Twitter and when you’ve officially begun free-floating in the cold, lawless void of gay Twitter.

There’s no initiation fee and you never get an invitation or an official gay Twitter membership card. Really, most of us spend our time straddling both worlds — with one foot in Anthony Oliveira’s feed and another snarkily responding to whatever entirely harmless thing Neil deGrasse Tyson just ruined. But when you’ve reached gay Twitter, you know it.

It’s a community whose members interact as though they’re lifelong friends, and yet the vast majority of them will likely never meet the people with whom they spend so much time swapping Drag Race GIFs and hyperbolically geeking out over Laura Dern’s purple Star Wars hair, for example. And that’s why, in May, John “Jack” O’Brien, a writer based in Los Angeles, decided to start the gay Twitter voice thread.

“Welcome to the gay Twitter voice thread,” O’Brien wrote. “Post a video of your voice so we can all hear each other. Don’t be shy.”

Over the course of a few days, dozens and dozens of people posted videos in response to O’Brien’s original tweet. Some people posted videos of themselves telling a funny story. Others performed a monologue from a movie. Some just rambled about whatever they were doing that day, but it was all in service of this digital approximation of a real-life hangout for people who tweet back and forth constantly.

“I’m interacting with all these people that I’ve never met and probably will never meet, and I just didn’t know what anybody sounded like,” O’Brien told Mic. “I thought it was interesting. I wanted to hear people’s voices. Especially — I don’t know if it’s gay culture or not — but ... there are a wide range of voices that gay guys can have and I wanted to know who sounded like what.”

Eventually the responses died down, but O’Brien said he continues to get an occasional burst of notifications when someone finds the thread for the first time and starts liking them. This never-ending resurfacing of the thread led O’Brien to start thinking about what version 2.0 might look like.

“I was like, well, what if I did a joke dirty sex thing — and then I realized that’s pretty much the same as doing a genuine dirty sex thing,” O’Brien said. “So then I thought, what if I went the other way and did something completely bland as a joke? What’s the dumbest thing that you could see on a person that tells you the least about that person? What part of someone contains the least information about their personality?”

O’Brien toyed with the idea of toothbrushes, sneakers and just about any body part you can think of. All of it was potentially far too useful.

“I ended up on wrists,” he said. And thus the gay Twitter wrist thread was born.

As before, dozens and dozens of people responded to a picture of O’Brien’s lightly freckled wrist with pictures of their own, with varying degrees of enthusiasm and awareness of what the hell was going on.

And, despite O’Brien’s initial intentions, he said participants still found a way to sexualize the thread by focusing on a wrist’s hair or veins or whatever other little detail caught their eye.

“People did sexualize it,” O’Brien said. “I don’t think in a negative way, but in an interesting way. There were people who were like ‘OK, now I’m attracted to wrists.’”

And, despite the goofy premise, O’Brien said one picture in the thread was unexpectedly poignant.

“On a serious note, someone else posted a picture of their wrist with a self-harm scar, and they were like, ‘I’m posting this because ... this bad thing happened to me but I’m not scared to show it. This is who I am,’” O’Brien said. “And I thought that was really positive. I did not see that coming at all.”

In fact, the thread as a whole is actually kind of sweet. Each picture offers a hyperdetailed glimpse into the poster’s physical world, not only allowing viewers to scrutinize every hair follicle on their skin, but also to imagine how the wrist’s surroundings fit into whatever its owner was doing that day.

Really, the thread is gay Twitter at its best: Pointless, (mostly) self-aware, hilarious and with a way-higher-than-necessary level of participation, but ultimately in service of everyone wanting to feel like they’re in on whatever the joke of the moment is.

“And [it highlights our] obsessive need to share,” O’Brien said. “We all overshare. That’s where the dirty joke culture comes from, is we want to say the gross thing that we have to deal with that comes from being gay that straight people don’t have to ever think about. So when someone is like, ‘Share this,’ everyone is like, ‘Oh yeah I’ll share that. I talk about sex all the time so why shouldn’t I share my wrist?’”