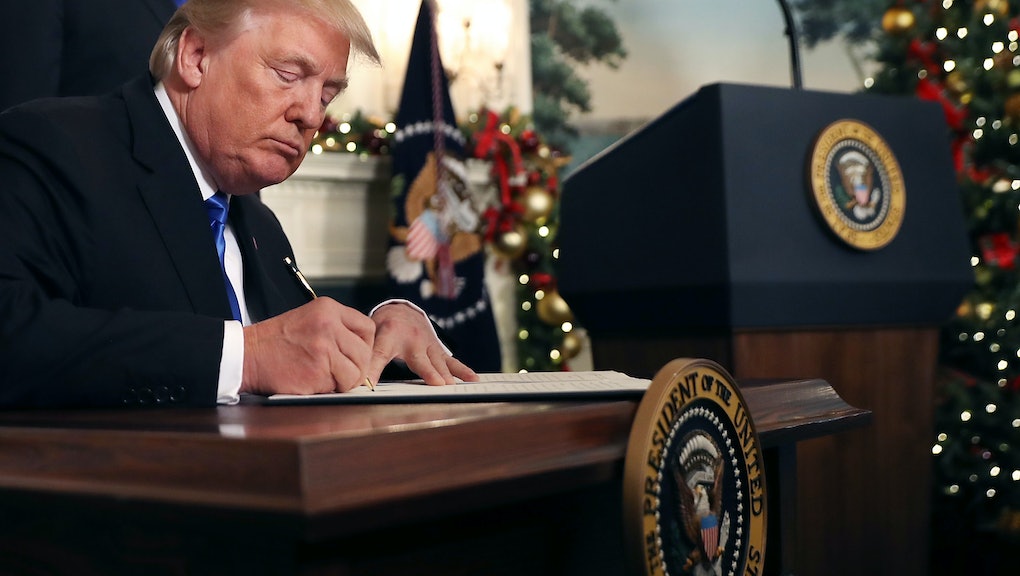 On Wednesday, President Donald Trump announced a controversial proposal to move the United States embassy in Israel from Tel Aviv to Jerusalem, breaking with decades of precedent and threatening to derail any prospect for peace in the region.

“Today we finally acknowledge the obvious, that Jerusalem is Israel’s capital,” Trump said in a speech.

It has long been believed that the status of Jerusalem must be negotiated as part of a peace agreement between Israel and Palestine. By moving the U.S. embassy into Jerusalem, Trump is taking a decisive step away from a potential future peace agreement, and towards supporting Israel’s ongoing occupation of Palestine.

The decision could have some wide-ranging implications for the region and the potential fracturing U.S. political coalitions.

A lot of world leaders think this is a bad idea.

Within the U.S. it might be unclear that Trump’s decision does not have broad global support. From former Trump adviser Steve Bannon to Democratic Senate Minority Leader Chuck Schumer, a variety of media players and politicians support the decision.

But the rest of the world tends to agree it’s is a bad idea. U.S. allies such as Great Britain, France and Germany all warned against the potential ramifications of the decision. Regional partners Egypt and Turkey have strongly condemned the decision, with the latter threatening to cut ties with the United States entirely.

And even prominent Israelis have condemned the decision. On Monday, 25 former Israeli ambassadors, academics and peace activists sent a letter to the Trump administration cautioning against moving the embassy, and arguing that the status of Jerusalem “must be determined within the context of resolving that conflict.”

The move will likely lead to violence.

The decision to move the embassy has already prompted a wave of organized protest. Palestinian factions have united for what has been described as a “three days of rage” protest in response to the decision. This could kick off another violent clash between Palestinians and the Israeli military.

Ironically, this has already led the U.S. consulate general in Jerusalem to restrict travel for all U.S. government employees in the city that they plan to make the hub of American-Israeli diplomacy.

In the past, heightened tensions have lead to violent clashes between Palestinians and Israeli military forces — most famously in the first and second Intifadas, in the late ‘80s through early ‘90s and in the early 2000s, respectively, and again in the brutal 2014 conflict.

Though casualties always occur on both sides of the ongoing conflict, Palestinians have historically faced the overwhelming share of that violence, at the hands of the Israeli Defense Forces. Since the Second Intifada, the share of Palestinian deaths in conflicts has risen sharply.

In 2014 over 2,000 Palestinians were killed, almost a quarter of whom were children. Around 70 Israelis lost their lives in the conflict, only six of whom were civilians — including one child.

The decision could accelerate a growing generational divide on Israel’s occupation.

American politicians and institutions in the U.S. already have a generational problem when it comes to the occupation of Palestine. And Trump’s decision could exacerbate that.

Polling finds that younger generations are far more likely to sympathize with Palestinians in the conflict than older generations are. New youth movements of American Jews who oppose the occupation have emerged in recent years, and even young evangelicals, whose belief in the biblical importance of Israel has been key to American support for the state, are now less supportive of the state than ever before.

Combine that with the abysmal approval ratings the U.S. president has with young people and you’ve got a recipe for a large-scale shift in public opinion on the issue.

A historically unpopular president making a globally unpopular decision could push young Americans even further toward questioning the occupation and America’s unconditional support for the state of Israel.

And though defense of Israel against its neighbors has been an issue that typically enjoys bipartisan support, Democrats will have a hard time defending anything with Trump’s imprimatur.

That could spell long-term disaster for the many organizations that lobby on behalf of the state of Israel in the U.S., even as they achieve a historic win on a key policy priority.