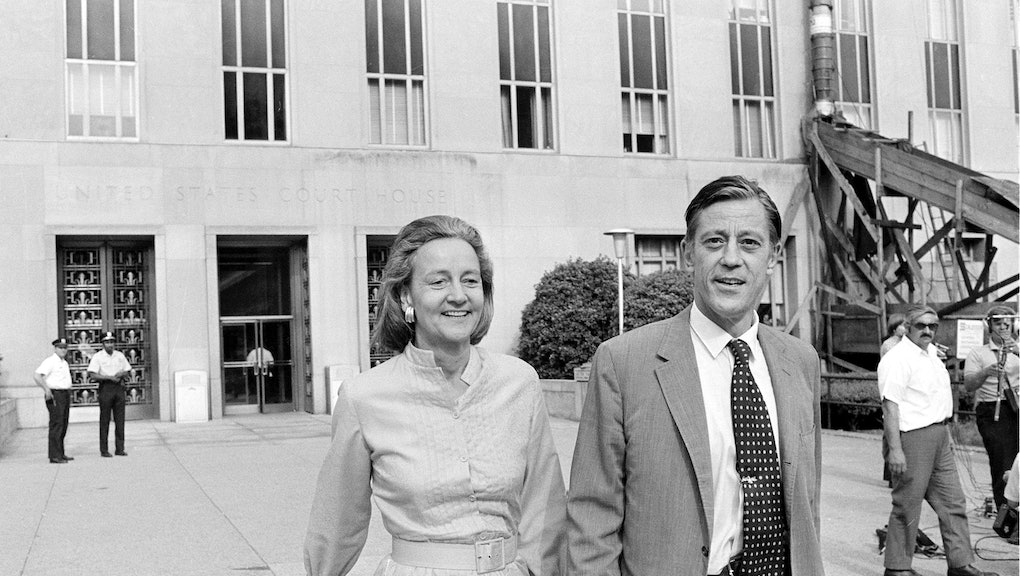 Donald Trump’s presidency has been defined by its potential corruption and attacks on the press as it seeks to expose the truth — but a new movie is reminding us that the country has been here before.

The Post, a new film by Steven Spielberg, centers on the Washington Post as it fought to release excerpts of the Pentagon Papers in 1971. The film stars A-list talent Tom Hanks and Meryl Streep as the Post’s executive editor Ben Bradlee and publisher Katharine Graham, respectively, as the two challenged the U.S. government by publishing the damaging documents.

Though the film has been described as “the best Meryl Streep vehicle in years” and a portrait of Graham, who was the first woman to run a Fortune 500 company, it’s also an important reminder of the Pentagon Papers, whose publication sparked an important debate about transparency and freedom of the press that now feels more relevant than ever.

Here’s what to know about the explosive document and the events of its publication that inspired the new film.

What are the Pentagon Papers?

The Pentagon Papers was a 47-volume document chronicling the history of the U.S.’s political and military involvement in Vietnam from World War II to the document’s creation. The report, which consisted of 3,000 pages of narrative and 4,000 pages of supporting documents, was commissioned by the Department of Defense in 1967 and completed in 1969.

The papers contained a great deal of damaging information on the U.S.’ controversial involvement in Vietnam. Among the claims found in the documents were revelations that President John F. Kennedy actively helped to assassinate and overthrow South Vietnamese President Ngo Dinh Diem in 1963; that the U.S. bombing of North Vietnam had “no real impact on the enemy’s will to fight,” contradicting the U.S. government’s public pronouncements; that President Lyndon B. Johnson began planning war against Vietnam in 1964, one year before the U.S.’ involvement in Vietnam became publicly known; and that Johnson ordered the bombing of North Vietnam against the U.S. intelligence community’s advice — among other pieces of damaging information.

The Pentagon Papers became publicly available in full in 2011 and can now be accessed by the public through the National Archives.

Involved in the report’s creation was Daniel Ellsberg, a former U.S. Marine Corps officer and analyst at the RAND Corporation and Department of Defense. Ellsberg, who came to oppose the Vietnam War by the time of the report’s release, created photocopies of the document from September 1969 to November 1969, with an eye toward making their damaging revelations known.

Ellsberg initially went to members of Congress and the government with the papers, a timeline published by the University of Southern California noted, along with MIT professors Noam Chomsky and Howard Zinn. Little happened with the papers, however, until Ellsberg went to the press.

After the report’s existence was first reported in March 1971 by the Boston Globe, New York Times reporter Neil Sheehan received the Pentagon Papers in full from Ellsberg and the paper began preparing for their public release.

The Times began reporting on the Pentagon Papers on June 13, 1971, publishing an article entitled “Vietnam Archive: Pentagon Study Traces 3 Decades of Growing U. S. Involvement.” The Times continued to report stories on June 14 and June 15, 1971 about the papers, along with publishing actual documents from the report itself in the newspaper.

After the paper’s initial three stories, however, the U.S. government got involved, as the disclosure of the classified documents reportedly proved “embarrassing” to then-president Richard Nixon. The U.S. Department of Justice issued a temporary restraining order in a federal court that prevented the Times from publishing additional information from the report after the June 15 story, citing the “immediate and irreparable harm” the report’s information would have on U.S. defense interests.

“This was not a breach of national security,” Arthur Ochs Sulzberger, the Times’s then-president and publisher, said at the time, as quoted by the Times. “We gave away no national secrets. We didn’t jeopardize any American soldiers or Marines overseas.”

The restraining order, the Times noted in March, marked the first time that a court had ever blocked a newspaper from running a story ahead of its publication.

The Pentagon Papers in other newspapers

As movie’s focus on the Washington Post suggests, the Times wasn’t the only one to report on the Pentagon Papers. According to Ellsberg, he gave the papers to a total of 19 newspapers, including the Washington Post, Boston Globe and St. Louis Post-Dispatch, which were all issued their own restraining orders by the U.S. government.

The Post was the first to take up the mantle after the Times was barred from publishing the report. Following a reported battle between the newspaper’s newsroom and attorneys, the newspaper published its first story on June 18, 1971, after receiving the papers just two days prior. The newspaper then joined the Times to fight against the courts’ censorship of its reporting.

In addition to the newspaper reporting on the Pentagon Papers, the document also entered into the public record when it was read aloud during a Senate subcommittee hearing by Alaska Sen. Mike Gravel on June 29, 1971.

Hollywood’s decision to focus on the Post for its role in the Pentagon Papers, rather than the Times, is now being heavily criticized. The paper ultimately received a Pulitzer Prize for its reporting in 1972.

“I can’t get over it. For generations, people will see the movie and say, ’Oh, yes, the Washington Post — they got the Pentagon Papers. It’s a great concern to me,” James Greenfield, the Times’ foreign editor at the time, told the Columbia Journalism Review. “In the minds of young viewers, this will be their version of history.”

Ellsberg, who Spielberg consulted for the movie, remains in support of the film’s focus, however.

“I can understand that the Times feels, ‘Hey, the Pentagon Papers is our story,’” Ellsberg told the CJR. “But 19 papers altogether were involved in this.”

Just two weeks after the Times was forced to cease its reporting, the Times and Post’s case against the U.S. government made its way to the Supreme Court with the case New York Times Co v. United States.

On June 30, 1971, the Supreme Court ruled in favor of the newspapers in a vote of 6-3, enabling the Times and other papers to resume their reporting. The court noted that the newspaper’s reporting didn’t warrant being restrained by the government, writing that the government couldn’t adequately prove that the reporting would “surely result in direct, immediate, and irreparable damage to our nation or its people.”

“In the absence of the governmental checks and balances present in other areas of our national life, the only effective restraint upon executive policy and power in the areas of national defense and international affairs may lie in an enlightened citizenry — in an informed and critical public opinion which alone can here protect the values of democratic government,” Supreme Court Justice Potter Stewart wrote, as quoted by History.com.

Following the government’s failed attempt to penalize the news outlets, the Nixon administration then turned its focus on Ellsberg and associate Russo, as the two were indicted on charges of conspiracy, espionage and theft.

In 1973, however, charges against the two were dropped, after it was revealed that a secret team tasked by the Nixon administration had burglarized the office of Ellsberg’s psychiatrist, Lewis Fielding, in an attempt to find discrediting information about Ellsberg.

The group who broke into the office were known as the “plumbers” — a unit that would later become mired in the Watergate scandal. Two of the men who broke in to the psychiatrist’s office, E. Howard Hunt and G. Gordon Liddy, were later part of the Watergate break-in that would go on to trigger Nixon’s resignation from the presidency.

The continued influence of the Pentagon Papers

The publication of the Pentagon Papers and the legal battle that ensued sparked a national debate over transparency and the freedom of the press, the Times noted in 1972 — and from Edward Snowden to Trump’s presidency, those questions remain as relevant as ever.

“[The Pentagon Papers] reaffirmed a tradition in the U.S. against beforehand prevention of the publication of documents. If the government had been able to do that, it would have cast a really dark shadow over journalism,” historian Lloyd Gardner told the Guardian.

Even as the Pentagon Papers reaffirmed journalists’ autonomy, though, it also sparked a “tension” between reporters and public officials that continues to this day.

“That’s the lesson of the Pentagon papers,” Ellsberg told the Times in 1996. “No matter how smart people are in the White House and the Pentagon, no matter how well intentioned, they can get into crazy and illegal activities. And once they’re in, and these schemes begin to fail, you cannot count on them to have the moral courage to admit a mistake, to cut their losses, to throw in the towel, to get out.”

That lesson rings true in an age where the president and his allies consistently attack the “fake news” media and deny wrongdoing, even as investigations into their behavior close in on potential illegal activities and collusion. But if a Pentagon Papers-style leak were to emerge today, experts say things might not turn out the same way as they did four decades ago.

“The Pentagon Papers of Afghanistan, Iraq, Syria, with documents (still totally secret) would be published, if someone supplied them, by the Times and Post, I believe, with considerable effect on public opinion but probably even less effect (with a Republican-dominated Congress) on actual conduct of the wars than then,” Ellsberg told the Guardian.

Trump’s sway over his base in discrediting the media could mean that public opinion, too, could be less strongly affected than it was in the 1970s.

“Look no further than the Roy Moore story,” Jeremy Varon, a history professor at the New School and author of Bringing the War Home: The Weather Underground, The Red Army Faction and the Revolutionary Violence in the Sixties and Seventies, told the Guardian. “The fact the president criticizes the media institution that broke it reduced its credibility in the eyes of people in Alabama. If the president promulgates the idea that media is motivated by partisan politics, it taints the information they publish in the eyes of those on one side the divide.”

But the precedent set by the Pentagon Papers and the Supreme Court decision that upheld their release could still play an important role in Trump’s America.

“We cannot predict today which publication will so inflame the president that he would seek to block publication of news, if he could,” attorney Floyd Abrams, who represented the Times in its Pentagon Papers case, told CNN. “But we can expect that that day will occur. When it does, the Pentagon Papers case will stand as a powerful barrier against any effort to suppress publication.”