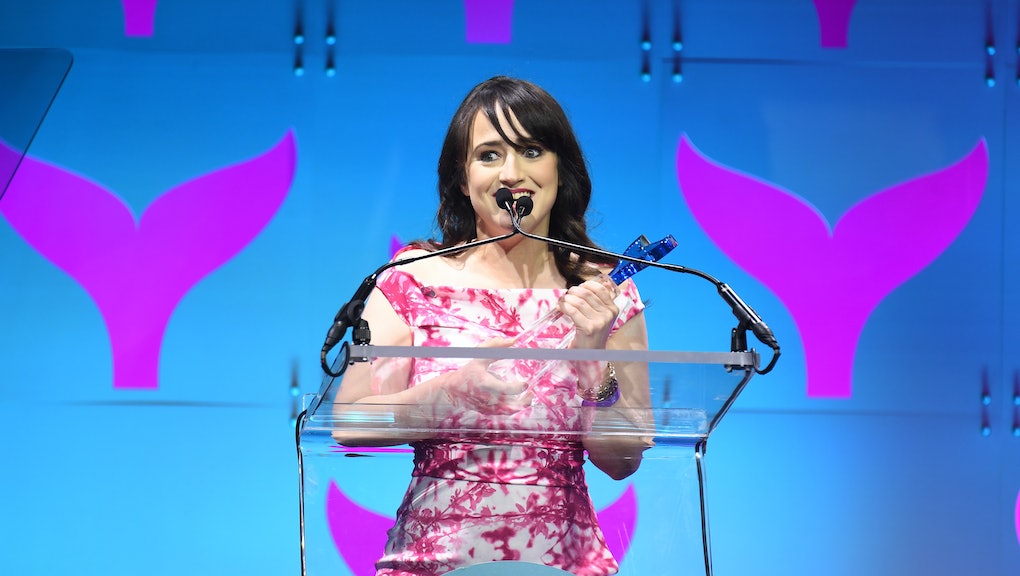 She noticed something familiar about the swirl of adoration whirring around the child stars of Netflix’s Stranger Things. People — and the press — just can’t get enough of Millie Bobby Brown, Finn Wolfhard and the others. Their extraordinary talent so apparent at such a young age that people are unable to process the fact that they are indeed very, very young. None of the stars are older than 16, and yet here was W magazine listing Brown as one of the reasons TV is “sexier than ever,” despite her being only 13 years old.

“I was expecting it to happen but I was hoping it wouldn’t,” Wilson said in an interview with Mic. “At first I was like, these kids seem fine. It all seems to be OK with them. Then this year I started seeing these ‘all grown up’ and ‘they’re teenagers now’ sentiments. I started seeing comments about Millie Bobby Brown. These jokes about Finn Wolfhard like, ‘You should call me in four years.’ That’s when I started to get upset.”

She got upset because she saw exactly what happened to her as a child star was now happening to these kids, too. After starring in a number of notable films as a child in the ’90s — Matilda and Mrs. Doubtfire among them — she was sexualized by the public and the media.

“I knew these things happened to me and almost every child actor I knew,” Wilson said. “It’s something that I find extremely upsetting — the way they think these kids are an acceptable target and people they can joke about. And they can sexualize them or objectify them or shame them because they appear to look older than they are. It was something I went through when I was young and it’s a problem now as it was then.”

It’s a cycle that’s yet to be broken. Instead, it’s evolved with the times.

“In the old days, if a man wanted to be creepy he had to show up at a premiere or an event I was at or write me a letter or post about me on a website,” Wilson said, acknowledging that she was a child star at the very beginning of the internet era. “Now you can send something directly to them and there is a lot of social media platforms that are slow to do anything about harassment. So there is this access there that is very scary.”

What has changed, in Wilson’s opinion, that is actually hopeful is that this conversation is even taking place. Twenty years ago, there was no mainstream conversation around the problems with people sexualizing stars like Wilson. Now, the W cover and that model who told Wolfhard to hit her up “in four years” get massive backlash. As Wilson said, “We know the truth now.”

But just acknowledging that sexualizing children is wrong hasn’t halted it from happening. Just a few weeks ago, Wilson had to lecture the internet — and specifically a man on Twitter who alluded to Brown looking older than 13 — on why the public and the media seeing these child stars as adults is hurtful.

So who’s to really blame here? Hollywood? The media? The public?

“I think there is this interdependency,” Wilson said. “They want to put the blame on Hollywood and the media — which are two different things, there’s a symbiotic relationship, but they are two different things — but there’s also the public. And Hollywood and the media try to give people what ‘the public’ will want. People are going to be buying these things and listening to these things. There’s a demand for this kind of behavior.”

It’s many things at once, with predators almost being pandered to at a certain point. “By saying ‘she’s all grown up’ it’s justifying the actions that they do,” Wilson said. “Predators will prey on children because they see them as weak but there are predators who say, well, she or he were a certain age but they seemed mature. There’s an attitude that you’re not seeing them as they truly are.”

And in the case of the Stranger Things kids — and other child stars, too — we should never forget that they are children. Forgetting that, or dismissing that, contributes to this culture of exploitation.

Given that this problem persists, a natural question is how, exactly, we try to stop it or limit it from happening. For Wilson, it’s about introspection.

“I think we need to think about the way we’re thinking of teenagers and teenage girls in particular,” Wilson said. “Look at them in the way we see ourselves as teenagers and just humanize them and realize they are real people.”