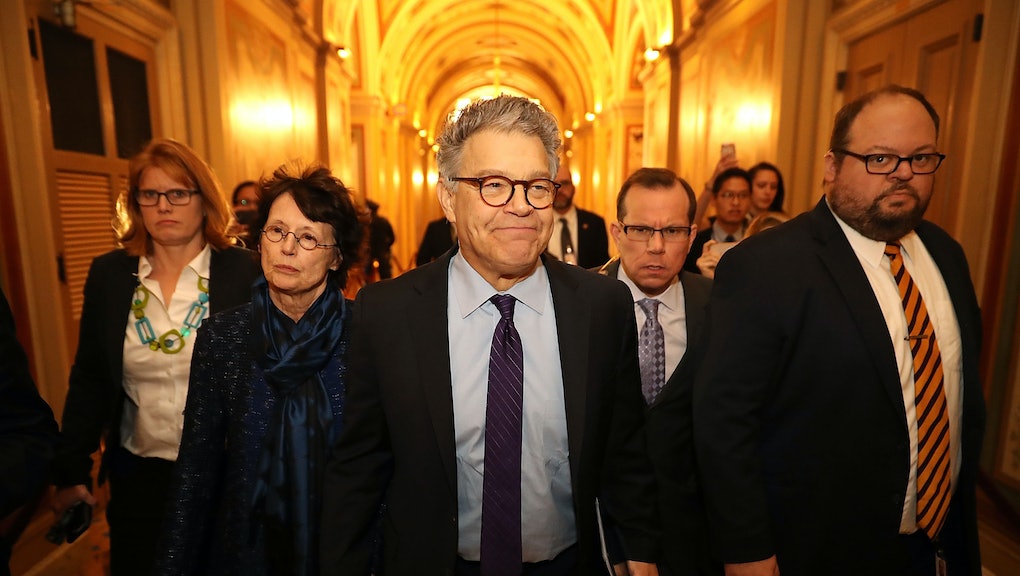 Here’s why conservatives are rushing to defend Al Franken

Republicans have an Al Franken problem.

The Minnesota liberal, who announced his Senate resignation Thursday, had been a political liability for Democrats for weeks as he faced allegations of sexual misconduct from several women.

Democrats had been hammering Republicans over their support for both President Donald Trump, who has been accused by numerous women of sexual assault, and Republican Senate candidate Roy Moore, an alleged child molester. But they were accused of hypocrisy for failing to come down hard on Franken and Rep. John Conyers (D-Mich.), whom House Minority Leader Nancy Pelosi defended as an “icon” after he was accused by several women of sexual harassment.

But Conyers resigned Tuesday, and on Wednesday, after a seventh woman came forward with allegations against Franken, a chorus of Democrats called on him to step down.

At the same time, Republicans — including Trump — have re-embraced Moore.

That, some conservatives have suggested, could leave them more vulnerable to attacks from a “lynch mob” over Trump and Moore.

Conservative pundit Laura Ingraham said on her Fox News program Wednesday that the Democrats’ calls for Franken to resign amounted to little more than a “political calculation” meant to make Republicans look bad.

“They have now determined that it is worth sacrificing Franken, just like they did John Conyers — throw him overboard to save the political Titanic that is their party,” Ingraham said. “Be wary of the lynch mob you join today because tomorrow, it could be coming for your husband, your brother, your son, and yes, even your president.”

Trump ally Newt Gingrich said on Ingraham’s show that Democrats were “lynching” Franken without due process “because when we get done lynching him, we’ll be so pure.”

Gingrich’s comments resembled some Republican talking points on Moore. After saying in November that Moore should drop out of the race, Senate Majority Leader Mitch McConnell said Monday that it’s “really up to” the people of Alabama to decide.

But that response has led to strong criticisms of the GOP, which reinstated its financial support for Moore mere days after cutting him off following Trump’s full-throated endorsement of the ex-judge.

During his emotional resignation speech, Franken himself made note of the fact he was being ousted while Trump remains president and Moore remains a candidate.

“I, of all people, am aware that there is some irony in the fact that I am leaving while a man who has bragged on tape of his history of sexual assault sits in the Oval Office,” Franken said on the Senate floor Thursday. “And a man who has repeatedly preyed on young girls campaigns for the Senate with the full support of his party.”

White House press secretary Sarah Huckabee Sanders has repeatedly attempted to strike a distinction between the accusations Democrats and left-leaning figures in the entertainment industry have faced and those leveled against Trump and Moore.

She has said “we don’t have a way to validate” the accusations against Moore, whom Trump has supported by saying the candidate “totally denies” the allegations.

She has also claimed the difference between the allegations against Trump and those against Franken were that the latter owned up to them, while the former has not.

“I think in one case, specifically, Sen. Franken has admitted wrongdoing and the president hasn’t,” Sanders told reporters in November. “I think that’s a very clear distinction.”

But some on the right have suggested Republican support for Moore has created a “hot mess” for the party.

“Republicans should now pray that either Franken refuses to quit or Moore loses,” Fox News’ Brit Hume tweeted Wednesday. “Otherwise, a hot mess for the party as Moore becomes their hood ornament.”

A number of Republicans, including House Speaker Paul Ryan, have remained steadfast in their opposition to Moore.

Ari Fleischer, who served as press secretary under former President George W. Bush, called for Moore to drop out of the Alabama race but defended Franken, saying “his facts are different.”

But Republicans’ support, explicit or implicit, for Trump and Moore have given rise to a perception they aren’t taking sexual misconduct allegations as seriously as the Democrats, who in ousting Conyers and Franken have excised two of their most popular members in a single week.

“Democrats, like Franken, are finally starting to account for their wrongs,” political commentator Sally Kohn wrote in a CNN column Thursday. “Republicans? They seem to be getting worse.”

That narrative made it all the way to the White House on Thursday, when a reporter asked Sanders during a press briefing whether there are any “differences in the way the two parties are handling these accusations of sexual misconduct?”

“I think that some of that would be left to some of the party leadership,” Sanders replied. “I’m not sure if there’s a specific question in there on the differences.”